Dragon Gate Pro Wrestling will be holding their annual Dead or Alive 2021 event live in Nagoya. Due to the event being in Nagoya, they will be allowed fans unlike many events going on this week. It’s a major show filled with title matches and a cage match main event. 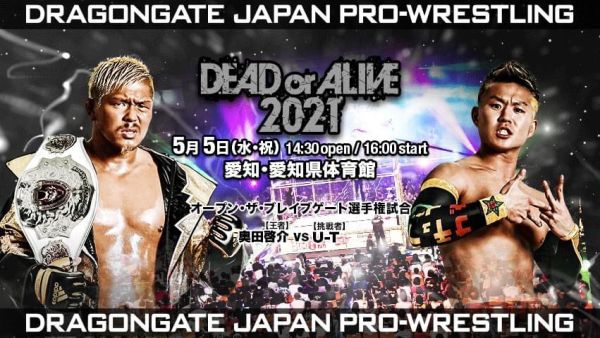 Keisuke Okuda has been on quite the tear as the Open The Brave Gate Champion. He most recently having yet another successful defense against Punch Tominaga. After the match is when he was challenged by U-T. U-T hasn’t challenged for the Brave Gate Championship in nearly two years so he is looking to achieve his  dream in his hometown, while Okuda looks to dash those dreams. Will Okuda retain, or will U-T win his first singles Championship? 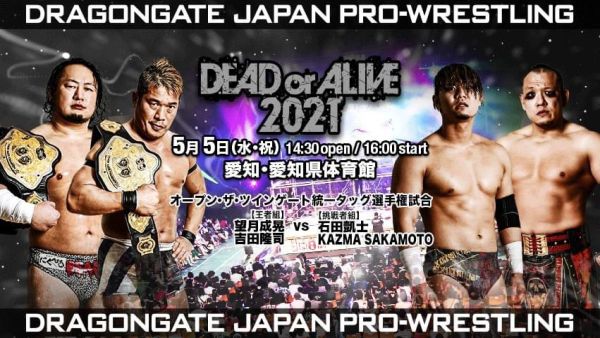 The big story leading up to this has been is Mochizuki really 100 percent. He has had his lower back taped up recently. Then, of course, KAZMA and Ishida have seen that as a target and have proceeded to attack it at every possible opportunity. Will Mochizuki and Yoshida be able to prove their strength and retain their belts? Or will KAZMA and Kaito be crowned as new champions? 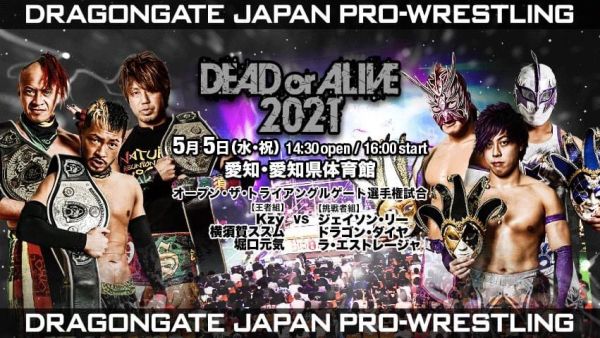 Jason Lee earned himself a shot at the Open The Triangle Gate Championship slowly but surely. First getting a pinfall victory over Susumu Yokosuka and then another over Genki Horiguchi. He then made his challenge, naming himself, La Estrella, and the returning Dragon Dia as the challenger team. Will this high speed Masquerade trio take the gold? Or will Natural Vibes dance their way to another successful defense? 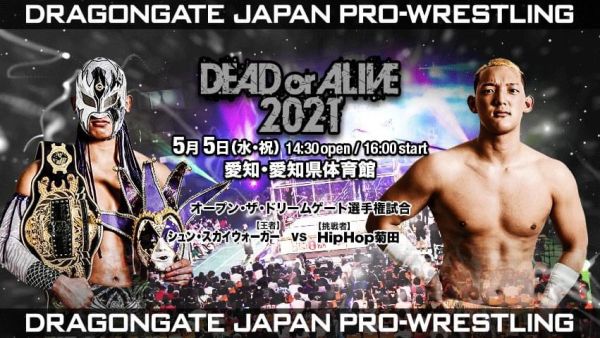 R.E.D. has no doubt been the biggest threat to Shun Skywalker’s reign as Open The Dream Gate Champion. As mentioned he turned back the challenge of Kaito Ishida, and then KAZMA Sakamoto. After beating KAZMA he was ambushed by HipHop Kikuta. Kikuta then announced his intention to challenge for the Dream Gate Championship.

Kikuta’s misson is clear — he wants to take Shun’s record as the youngest and fastest Dream Gate Champion. With the 20 year old being a little under a year into his career, can he take Shun’s record and become champion? Or will Shun continue a impressive reign thus far? 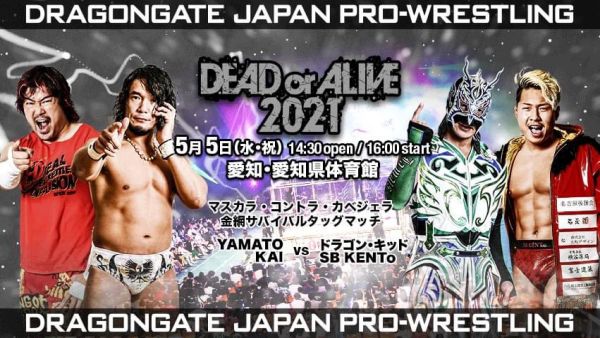 YAMATO and KAI have been at each other’s throats for well over a year when KAI turned on YAMATO to join R.E.D. SBKENTo and Dragon Kid have became embroiled in a big rivalry since Final Gate 2020, as SBKENTo ripped off Dragon Kid’s mask and made him tap in the losing unit must disband match. After multiple failed attempts to put these two feuds to rest, Matchmaker Yagi felt this was the only way. Pairing enemies with each other, the ultimate question is which makeshift team can coexist? Which competitor will ultimately leave bald or without their mask at Dead or Alive 2021?

Dragon Gate announced the following rules: Three flags will be placed atop the cage. The first team to pull two flags will win the match. The losing team will then immediately face each other in a singles match, with the loser having to share their head or remove their mask.

Due to the overwhelming numbers advantage that R.E.D. has over HIGH-END, on April 29 in Kanazawa, Dragon Kid sought to enlist the help of Natural Vibes and Masquerade. Both units agreed, so a lottery was held to determine which team each unit will provide support for, ending with Natural Vibes helping YAMATO and KAI. Meanwhile, Masquerade helps Dragon Kid and SBKENTo.