On December 20, 2020, Dragon Gate holds its last big event of the year: The Final Gate 2020. This will feature the culmination of storylines some stemming from a year ago and others from recent memory. Here is a rundown of the key matches to expect from this packed card. 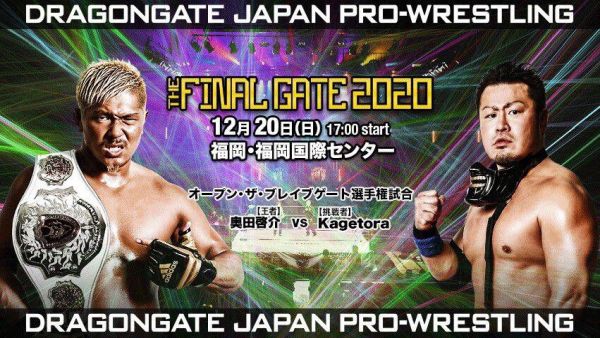 Since dethroning Kaito Ishida, Keisuke Okuda has been a force to be reckoned with. Okuda followed up his victory with his first successful defense against Ishida in their rubber match. Afterward, it seemed as if Okuda had no challenger for The Final Gate 2020. He looked to simply walk straight into the new year with the Open The Brave Gate Championship. However, during one of the house shows after Kobe World Pro Wrestling Festival 2020, former Brave Gate champion KAGETORA managed to score a win over Okuda in a tag match. KAGETORA challenged Okuda to a title match at the Final Gate event. Okuda accepted and the match was made official. Can Mr. Danger Zone continue his reign or will a former champion win the belt back in grand fashion? 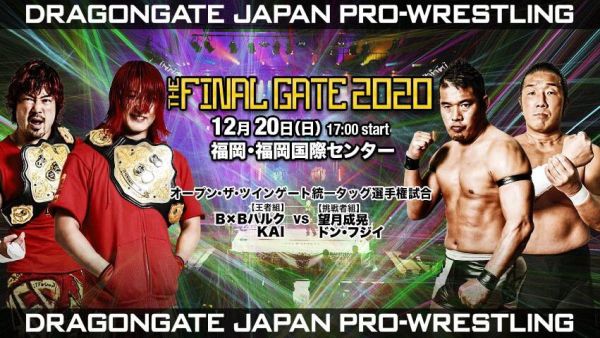 KAI and BxB Hulk formed close bond at the expense of their former friend YAMATO. This bond led to them torturing YAMATO and eventually capturing the Open The Twin Gate Championship. After dispatching the challenge of KZY and YAMATO, they were without direction. It seemed like they were just going to handle R.E.D. business for the rest of the year. This was, however, until in a multi-team tag match, Don Fuji got the shock pin on BxB Hulk, in a match where KAI was not his partner.

Afterward, the former two-time champs Masaaki Mochizuki and Don Fuji, issued the challenge. After Hulk got clearance from KAI, who said it would be an easy defense, he accepted and it was made official. Mochizuki told KAI and Hulk to not take them lightly or it would lead to the loss of their Twin Gate belts. Mochizuki backed this claim up when he pinned BxB Hulk in the Doi Darts Tag Match. Now that the champs have their back against the wall, will they gain that courage they need to pull through? Or will MochiFuji be able to call themselves three-time Open The Twin Gate Tag Team Champions? It all comes full circle at The Final Gate 2020. 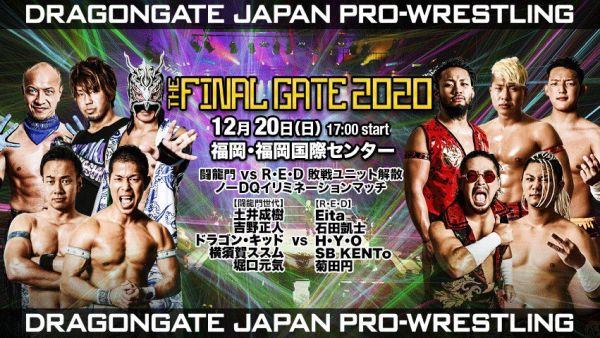 This match has been over a year in the making. Since Ultimo Dragon made his return to Dragon Gate, R.E.D. made it their mission to rid Dragon Gate of Ultimo Dragon. However, it wouldn’t be easy; due to the generation war, Toryumon would be revived as its own unit. This consisted of of students trained by Ultimo Dragon or products of Toryumon Japan and Mexico. At the Toryumon reunion show, R.E.D. showed up to crash the party. However, they were taken out by the Toryumon alumni. Things slowed down upon the shutdown of the world, although they continued to war. Back at Dangerous Gate 2020, during the cage match main event. R.E.D. chose the stipulation that. if Masato Yoshino lost, he would retire immediately and have his retirement match with Naruki Doi. Yoshino won the match, ultimately exiling Big R Shimizu from R.E.D.

Back at Kobe World Pro Wrestling Festival 2020, H•Y•O won a battle royal that granted him any wish he wanted. After a Korakuen Hall main event between the two groups, which saw Hip Hop Kikuta turn and join R.E.D., H•Y•O announced his wish: to see Toryumon disbanded. Genki Horiguchi got on the mic, saying he couldn’t wish for that. R.E.D. proposed a losing unit must disband no disqualification elimination match. Genki asked for the blessing from Ultimo Dragon and once both sides chose their five, the match was set. A unit will disband in the first losing unit must disband no disqualification elimination match since VerserK disbanded the Jimmyz in 2017, which Susumu Yokosuka and Genki were apart of. One thing is for sure: the momentum of Dragon Gate will shift due to this very match.

The main event is another bout close to a year in the making. Last year, Ben-K was kicked out of R.E.D., which led to him going out on his own with no friends. He won the King Of Gate 2019 before beating PAC for the Dream Gate Championship at Kobe World Pro Wrestling Festival 2019. Soon after, he would gain an ally in Shun Skywalker who left Mochizuki Dojo in search of results. However, they didn’t come like he may have hoped. This proved true when, at a December Korakuen event last year, Ben-K defeated him in a singles match. This made Shun decide to head off to Mexico to better himself.

When Shun returned, he shot for the top going after Eita. Shun won the Open The Dream Gate Championship from him in the main event of Kobe World Pro Wrestling Festival 2020. As he gave his speech, Ben-K interrupted and proclaimed himself the next challenger. Add into the mix that Shun Skywalker stole some of Ben-K’s fellow stablemates, from Dragon Gate Generation, to form Masquerade. The tension is high for this main event. Shun looks to continue his roll while Ben aims to end his reign quickly at The Final Gate 2020.