On Sunday night, history will officially be made. With the main event pitting the IMPACT World Champion against the AEW World Champion at Rebellion, there may not be a bigger night. This is the biggest match in IMPACT’s most recent history and while this match brings most of the glam and excitement, the rest of the card should impress as well. Here’s the IMPACT Rebellion results and analysis, featuring Rich Swann versus Kenny Omega. 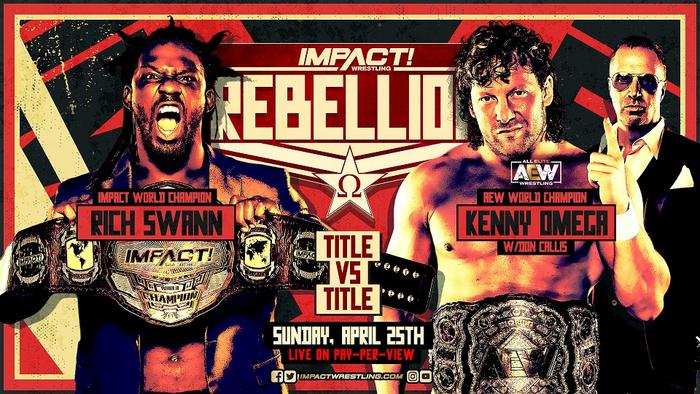 It’s the biggest match in IMPACT Wrestling history. That isn’t to be taken lightly considering the talent that has been in the locker rooms of this company, that is saying a lot. Title versus Title makes that special. Rich Swann, the Undisputed IMPACT World Champion, facing Kenny Omega, the AEW World Champion, isn’t something anyone could have dreamt of just a year ago. From the entrances to when they got in the ring, this was important. Tony Khan and Scott D’Amore were watching on, only furthering the importance. This was a special match.

If we are being honest, the early going was Omega heavy as he worked to tire Swann and was heelish with everything he did. There was a scary moment when Swann attempted to handstand on the apron but smashed his head instead. This allowed Omega to work over the neck for a good majority before Swann got his composure back. Once Swann was back, the pace picked up massively. Back and forth these two went, Swann managing to reverse anything Omega threw at him.

However, when the V-Trigger came into play, so did Omega’s momentum once again. It’s worth noting that earlier in the night, it was revealed there would be both an IMPACT Wrestling referee and AEW referee as well. At one point, Omega moved the IMPACT referee into the way to get hit by a handspring cutter by Swann. It seemed AEW was going to be able to cheat their way into a win, but Aubrey Edwards played it down the middle by removing the chair Omega had in possession to keep it down the middle.

Bless the fighter that Swann is. The man kept doing his best to survive as we got down to the close. Omega hit Swann three times with an exposed knee V-Trigger. Swann looked out but the IMPACT World Champion kept on fighting. Swann went for the home run shot with a Phoenix Splash but missed and that was the ending for Swann. One last devastating knee trigger to the skull of Swann followed by the undeniable One-Winged Angel to win the match and become the IMPACT World Champion. The belt collector now held the IMPACT, AAA, and AEW world championships.

This match was everything advertised. After a slow start, the last 10 minutes were nothing but action. Swann showed the heart of a champion. The same heart that got him to this point in his career. But Omega, the man many call the “Best in the World,” simply had his number. There was no screw job or “Dusty” finish. Kenny Omega was better than Swann on this night in a match worth going out of your way to see.

The disgust on D’Amore’s face was notable as this match ended. Wednesday and Thursday instantly become must-watch as the fallout from Omega’s historic victory is bound to have a ripple effect on both Dynamite and IMPACT on AXS TV.

A fantastic night of wrestling overall.