The Pioneers is an on-going series looking at some of the earliest pioneers of professional wrestling as we know it, from the wrestlers to promoters to trainers who helped shape professional wrestling around the world. This article looks at two Canadian brothers, Mike and Ben Sharpe, who not only defined tag team wrestling in the early days of the NWA but became the first gaijin superstars in Japan.

In Japan, there’s a certain aura about non-Japanese wrestlers. Known as gaijin (which literally means “foreigner”), they are most often portrayed as outsiders, as foreign talents looking to take away the spotlight from Japan’s homegrown stars. Over the decades, since the rise of pro wrestling in Japan in the 1950s, many have made huge names for themselves in Japan, from Lou Thesz to Hulk Hogan to the majority of the Bullet Club‘s members, but it was the arrival of the Canadian tandem of real-life brothers Mike & Ben Sharpe in 1954, who officially made gaijin wrestlers a top draw trend in Japan that has become standard in the near 70 years since. 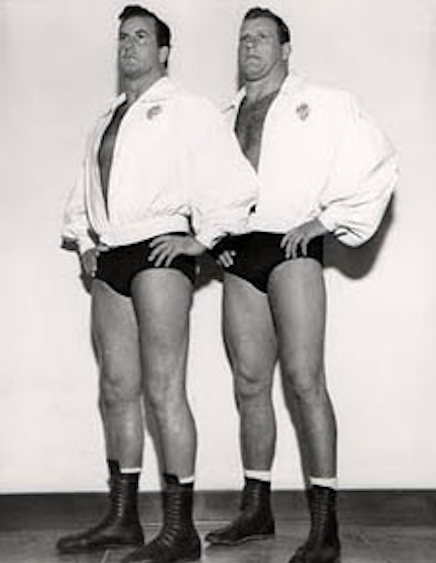 The Sharpe Brothers hailed from Hamilton, Ontario, Canada, a blue-collar working-class city less than 40 miles southwest of Toronto. Over the decades, Hamilton has produced many wrestling names such as John Tolos, Skull Murphy, Billy Red Lyons, George Scott, The Missing Link (Dewey Robertson), and “All Ego” Ethan Page. But while many became huge stars, arguably none had the influence of Ben and Mike Sharpe in professional wrestling. The two brothers were naturally athletic, strong, and tall – Mike stood 6’5 and Ben was 6’6. In 1936, Ben Sharpe represented Canada in the Summer Olympics in rowing, and both men served in the Royal Air Force during World War II. It was while serving in England that the two brothers fell in love with professional wrestling, and were mentored by popular British star Lord James Blears. In 1946, Blears left the UK for the United States, and soon became an early star in the National Wrestling Alliance (NWA) upon its formation in 1948. The Sharpe Brothers followed suit, first heading back home to Canada, working for Maple Leaf Wrestling in Toronto in 1947, before heading to the U.S. to begin to work the NWA territories south of the border. They began working feuds with the Dusek Brothers (Ernie & Joe Dusek), who would soon become a 4x NWA World Tag Team Championship tandem – it was like the earliest days of the Rock N’ Roll Express vs The Midnight Express. In the spring of 1950, the Sharpe Brothers headed to the West Coast and joined up with NWA San Francisco just as tag team wrestling was transitioning from being a novelty part of the show to becoming a huge part of the card – and California soon became the foundation for tag team gold. That fall, the Sharpe Brothers won the NWA Pacific Coast Tag Team Championships and then again in early 1951. In May 1951, they defeated Sandor Szabo and fellow Southwest Ontario Canadian Walter Kowalski (pre-Killer, from Windsor, Ontario) to win the inaugural NWA World Tag Team titles, the first recognized World Tag Team titles in the NWA (albeit the San Francisco version, as each territory would have their own version of the NWA World Tag Titles). By 1954, they were 5x NWA World Tag Team Champions in San Francisco, as well as capturing the NWA World Tag titles in NWA Upstate in New York. The Sharpe Brothers were the first tag team to genuinely become superstars due to their tag team abilities, and not because they were two singles stars paired together. 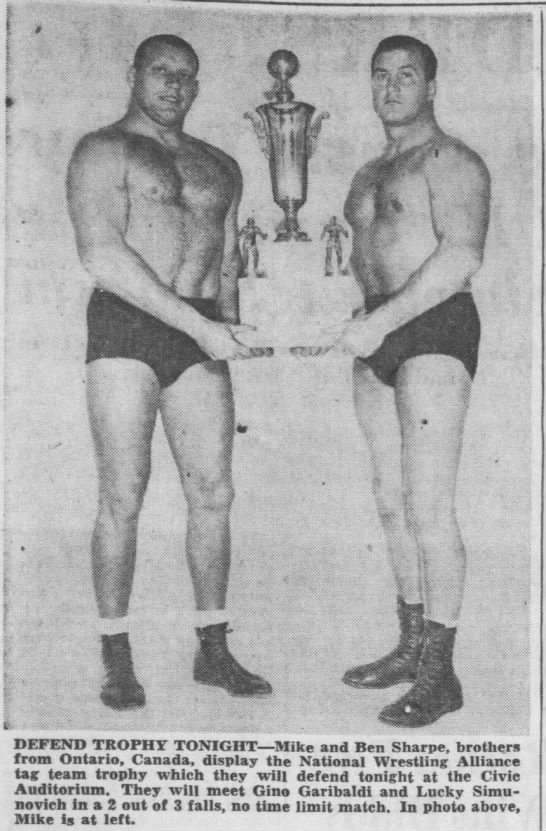 Over in Japan, the country was in its infancy as far as pro wrestling was concerned. While many had tried to get the business going, such as legendary names like Matsuda Sorakichi at the turn of the century and Sadako Ikari, the first Joshi star (women’s wrestler) in the 1940s, it wouldn’t be until Korean-born Rikidozan returned from an excursion to the United States to form Japan Pro Wrestling Alliance (JWA) in 1953 that the country began to lay its roots. Rikidozan went to the U.S. to work on the West Coast, where he worked for many of the same promotions as The Sharpe Brothers, including NWA San Francisco. Between California and Hawaii, Rikidozan became a top heel as a Japanese villain post-World War II and returned to Japan in 1953 determined to bring the American tradition to Japan. After months of planning, Rikidozan was set to debut JWA with an eight-day event to officially launch JWA as Japan’s first true top-tier promotion, called the JWA International Big Competition Series. While early Japanese attempts at pro wrestling felt more like vaudeville performances, JWA would highlight some of Japan’s best homegrown talents, including Rikidozan as well as Masahiko Kimura (the Kimura Lock move was created by him), Kokichi Endo, and more. But Rikidozan wanted to bring over the best from the U.S. as well, and it just so happened two of them were then-NWA World Tag Team Champions, The Sharpe Brothers.

For eight days, the series attracted 13,000 fans each night, with one of the events airing live on national television, still a new phenomenon in Japan. It became the most-watched event in Japanese TV history at the time. With television still a new attraction in Japan, most of the population still did not own one – but on the night of the show, thousands of Japanese citizens crowded the streets to get a glimpse of TVs in storefront windows that were airing the match. The result was the elevation of pro wrestling to a national art form, with Rikidozan becoming a national icon. Two of his pupils – Antonio Inoki and Shohei “Giant” Baba – would continue his legacy after Rikidozan’s death, with Inoki founding New Japan Pro Wrestling (NJPW) and Baba creating All Japan Pro Wrestling (AJPW). But while it cemented Rikodozan as Japan’s national hero, it made The Sharpe Brothers into the country’s greatest gaijin invaders. For most of the eight nights, The Sharpe Brothers would headline the card, facing Rikidozan and a partner (most often Kimura) for the NWA World Tag Team Titles. 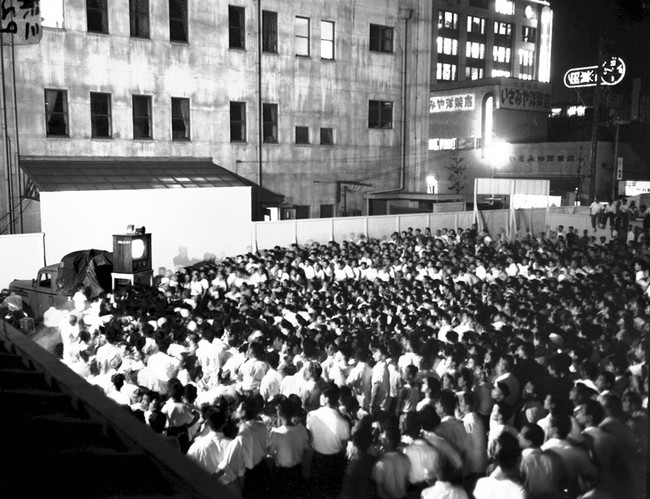 Japanese crowds jamming the streets to watch Rikidozan & Kimura face the Sharpe Brothers on a TV outside.

“There were interviewers before Mean Gene, announcers preceding Howard Finkel, and shoot wrestlers before Volk Han,” said Wrestling Observer’s Ryan Clingman in 2015 in an article on the Sharpe Brothers’ historical importance, “but there simply weren’t gaijin wrestlers prior to the appearance of Mike and Ben Sharpe in Japan.” With Japan rebuilding its own self-confidence following the Second World War, pushing their Japanese stars as heroes facing off the invading forces of gaijin wrestlers became a formula for puroresu that would become a blueprint that is still felt today. While Rikidozan would not figure out the right combination to beat the NWA World Tag Team Champion Sharpe Brothers during that first week of events, the Sharpes would remain main event figures in JWA into the 1960s. In 1956, paired with Endo, Rikidozan would finally defeat the Sharpe Brothers and win the NWA World Tag Team titles (only to lose back to the Sharpes a short time later). The Sharpe Brothers would become legends from the early days of Japan pro wrestling, and would frequently appear in Japanese TV interviews long after they retired. In 1962, Ben Sharpe would retire from the industry (although he named one of his sons Riki in honor of Rikidozan), and that same year, Mike Sharpe won the All Asia Tag Team Championships with Buddy Austin (the top tag titles in JWA, that moved on to AJPW in the 1970s and continues to be defended today). Mike would follow his brother soon enough, and in 1964, retired as well.

In 1973, the Sharpe legacy would continue once again, this time in the form of Mike’s son, Mike Sharpe Jr. Also born in Hamilton, Ontario, Mike Jr. grew up in California before returning to Canada as a teenager with his mother. There he was trained by Dewey Robertson (pre-Missing Link) and in 1973, he made his debut in the NWA territories. In the 1980s, he would gain national attention as “Iron” Mike Sharpe, Canada’s Greatest Athlete, and one of the WWF’s top enhancement talents alongside Barry Horowitz and the recently departed Barry O. But the Sharpe Brothers of Mike & Ben Sharpe not only changed the game of what tag team wrestling could be in the fledgling NWA, but proved the drawing power of gaijin wrestlers in puroresu, opening up the doors for the likes of Stan Hansen, Vader, Owen Hart, British Bulldogs, Finn Balor (Prince Devitt), Kenny Omega, and so many more. As Clingman said in 2015, there was no one “more instrumental in their niche than Mike and Ben Sharpe –  after all, they founded their role, a rare feat.”