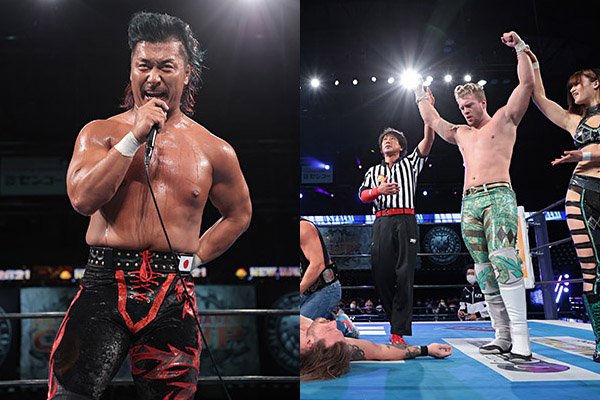 The battle to get from the field of 32 down to two has been nothing short of intense. Jaw-dropping upsets have been a theme and the finals have seen two competitors who have never held either the IWGP Heavyweight or Intercontinental Championships get one step closer to that opportunity. It’s been two very different roads for Los Ingobernables De Japon‘s Shingo Takagi and the United Empire leader Will Ospreay. Here’s a look at both of their journeys to the New Japan Cup final.

Shingo Takagi’s road through the New Japan Cup bracket has been nothing short of impressive, defeating the best of the best — including two former IWGP Heavyweight Champions — to get to the finals. His first-round matchup saw him face the great Kazuchika Okada. A match that many understandably saw Takagi as the underdog, saw him come out on top when he hit two Made in Japan finishers on the damaged Okada. Considering the favorite was eliminated in the first round by “The Dragon,” Takagi’s stock instantly rose to the top of the bracket and instilled him with the confidence to rise that much more.

Takagi would then face a hard-hitting battle in the second round as he would face Hirooki Goto. The two heavy-hitters went nearly 25 minutes in one of the best bouts of the entire tournament before Takagi once again came out as the victor. Maybe survivor is a better way to look at it. No matter, “The Dragon” would move on to face KENTA in a head-to-head between two performers who made their names outside of NJPW. It seemed as though Takagi could not find an easy break in terms of hard hitters, as KENTA is seen as one of the most feared strikers in wrestling. The 38-year-old came out the other side as the winner with a spot in the semi-finals against the 2020 New Japan Cup winner, EVIL.

EVIL had used all of his Bullet Club antics to try and get himself back to the finals of the New Japan Cup, utilizing Dick Togo to his advantage and even receiving help from Yujiro Takahashi as well. But when it came down to him and Takagi, nothing would stop “The Dragon” from reaching the pinnacle of the tournament. A win for Takagi furthered the notion that this can really be his time to rise to the top of the NJPW ladder, but he has one final stop before receiving hopeful glory.

Since creating the United Empire, Will Ospreay has been looking for that signature win. At Wrestle Kingdom 15, Ospreay lost to Kazuchika Okada, which halted that rise that he was trying to find by creating his own faction. The New Japan Cup was the place to try and refind that momentum. A first-round victory over four-time IWGP Heavyweight Champion Hiroyoshi Tenzan put those plans into action. From there came a second-round encounter with fellow countryman and long-time rival, Zack Sabre Jr. In their match, Sabre Jr. broke Ospreay’s nose while also targeting the shoulder repeatedly. There were multiple occasions it seemed “The Aerial Assassin” was going to come up short and the entire United Empire would be gone from the tournament, but a Stormbreaker to Sabre Jr. saw Ospreay escape into the quarterfinals.

The quarterfinals presented a unique bout with SANADA, who has had a history of making solid runs in the New Japan Cup in the past. This would be the second singles bout ever between Ospreay and SANADA, only enhancing the interest level that much more. They went into it as if they were rivals for years on end, showing an intensity with one another. Despite the near heroics of the “Cold Skull,” Ospreay found himself with a win and one step closer to the finals. His semi-finals matchup was a surprising one at that, as one half of the IMPACT Tag Team Champions David Finlay had been the Cinderella story of the tournament, with the biggest upset coming against Jay White in the quarterfinals.

It was a good time for Ospreay to play spoiler to such a magical run once again and that he did, putting an end to Finlay and securing his spot in the finals. “The Assassin” has the United Empire on the rise and a potential win in the finals may supplant them atop NJPW for years to come.

The rematch of the Best of the Super Juniors XXVI finals seemed to be destined for this moment. Now as heavyweights, these two have risen to the top of the food chain in NJPW. The last time these two faced off was actually the G1 Climax last year, a match that saw Takagi walk away victorious. But that “match of the year” contender from BOSJ in 2019 was the launching point for Ospreay. This match is going to be physical with plenty of intensity between the two combatants. And while it can go either way with an opportunity at Kota Ibushi, Ospreay seems to be the man most likely to walk away as the New Japan Cup winner.

Last year proved to be the ultimate moment for EVIL, so could the same be said for one of these two men? Time will tell.