This week’s episode of MLW FUSION should be jam-packed as we are one week from Never say Never. While we don’t know how the rest of the card will shape up for next week, we do have an exciting championship match for the main event. Let’s dive into this week’s MLW FUSION card! 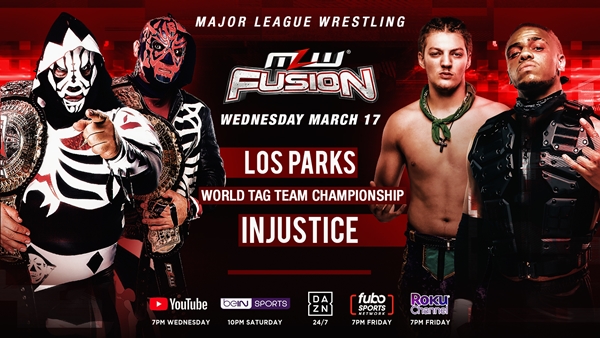 The team of Los Parks (L.A. Park & Hijo de L.A. Park) looks to bounce back after L.A. Park failed in his bid to capture to MLW National Openweight Championship from Alex Hammerstone last week. They face a tough challenge in the rising tandem of Jordan Oliver and Myron Reed.

The Injustice duo have been more prominent as singles competitors. Myron Reed is a former MLW Middleweight Champion, and Jordan Oliver is coming off a series of matches with CONTRA‘s Simon Gotch and challenging for the MLW World Heavyweight Championship. That war with CONTRA could be the big X factor in this crucial matchup. Jacob Fatu, the group’s leader, has been vocal about capturing all of the gold in MLW and his disdain for this young duo. Some help from ally Calvin Tankman could help the duo reign supreme and become the division’s new champions.

Sadly for the upstarts, I see the champions retaining here. They’re just getting settled into their reign, and with Azteca Underground looming, Los Parks try to keep a death grip on any gold they have. Regardless of the outcome, I feel this might only be the beginning of this story.

Stay tuned to the Last Word on Pro Wrestling for more on this and other stories from around the world of wrestling, as they develop. You can always count on LWOPW to be on top of the major news in the wrestling world, as well as to provide you with analysis, previews, videos, interviews, and editorials on the wrestling world. MLW FUSION airs every Wednesday on fubo Sports Network and YouTube at 7 PM EST and every Saturday on beIN SPORTS at 10 PM EST.