Game Changer Wrestling (GCW)‘s Acid Cup is returning for its third incarnation over WrestleMania Week in Tampa, Florida this year, and GCW has been slowly revealing the 16 entrants scheduled to take place in the tournament that features top indie stars competing alongside rising stars. The first Acid Cup (in 2016) saw Joey Janela capture the trophy, while the returning tournament last year in 2020 saw Chris Dickinson victorious. Now an annual tournament with GCW (in tribute to the late US indie pioneer Trent Acid), the first eight members of the field were revealed, and now weeks later, the final eight have now been fully announced. Here’s a closer look at the next eight competitors who will be joining Brayden Lee, Calvin Tankman, Dragon Bane, Edith Surreal (formerly Still Life With Apricots), Ken Broadway, Lee Moriarty, Tony Deppen, and Treehouse Lee in the 2021 GCW Acid Cup 3. Acid Cup 3 is airing live on FITE.tv starting first on Thursday, April 8, and then concluding on Night 2 on Friday, April 9. 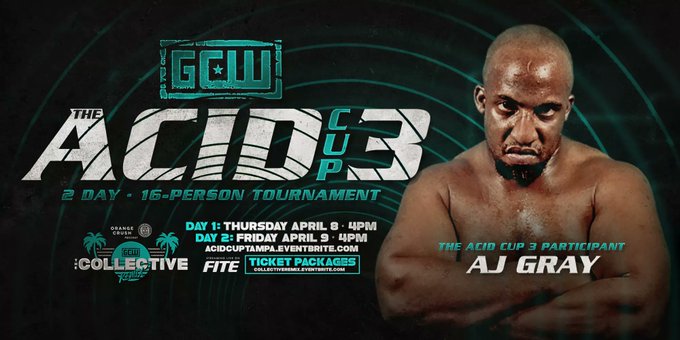 For the past few years, AJ Gray has emerged as one of the true impact players in the US indies and the former GCW World Heavyweight Champion is still chasing his elusive rematch for a title he was practically swindled out of when Rickey Shane Page beat him for the title in late 2019 (after Gray himself finally ended Nick Gage‘s 722-day reign as World Champion). Also a former Paradigm Pro Wrestling (PPW) Champion and Black Label Pro Midwest Champion, Gray is currently the reigning Glory Pro Crown of Glory Champion and Southern Underground Pro (SUP) Bonestorm Champion and continues to mow down most challengers in his path. Now, in his first Acid Cup appearance, AJ Gray will be looking to dominate the tournament and get back into the World title contention once again in GCW. 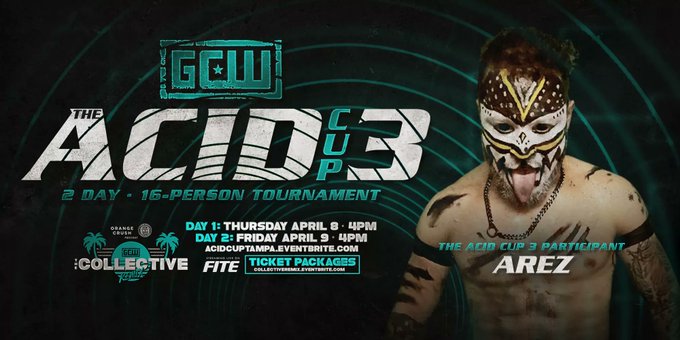 Joining Dragon Bane from the first round of announcements to add to the international flavor of the tournament, Mexico’s Arez returns to GCW to compete in his first Acid Cup tournament. Like many Mexican luchadors, Arez has been competing since he was a teenager, and the 14-year pro is only 29 years old. He’s spent the bulk of his career wrestling the various Mexican independents, but he’s had runs with AAA Lucha Libre and has been slowly working his way into the US indies since 2016, where he’s competed for GCW and Combat Zone Wrestling (CZW). Since 2018, he’s also appeared for IMPACT Wrestling when the company holds tapings in Mexico. 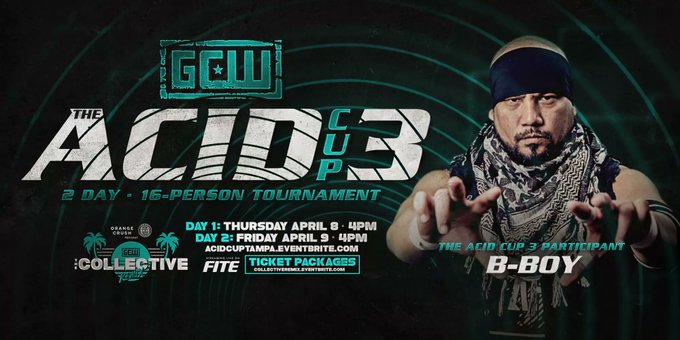 One of the West Coast indie scene’s true pioneers, San Diego’s B-Boy has been wrestling since the late 1990s. An early star with Pro Wrestling Guerrilla (PWG) in the early 2000s, he’s also competed nationally with CZW, IWA Mid-South, and many more, where he’s been a 3x PWG World Tag Team Champion, and in 2010 became CZW World Heavyweight Champion. He still competes at the highest level in many of the top indie promotions across the US from West Coast to East Coast, and makes his second Acid Cup appearance (he competed in the inaugural tournament in 2016). 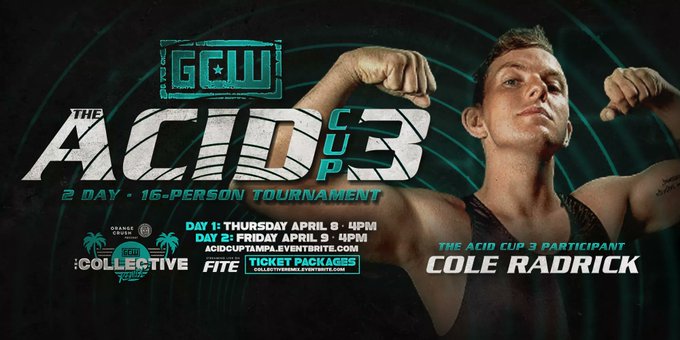 Spencer, Indiana’s Cole Radrick returns for his second Acid Cup after making his tournament debut in 2020. Cole Radrick has reinvented himself over the past two years and become one of the Midwest’s hungriest young stars, including a 245-day reign as PPW Champion. Radrick is one of the true underdogs in pro wrestling – he may diminutive in size in comparison to many of his competitors, but he’s got a fight in him that is unparalleled. Prior to Nick Gage’s injury in 2020, Radrick had been chasing the leader of the MDK Gang trying to incite the “God of This Shit” into a war. 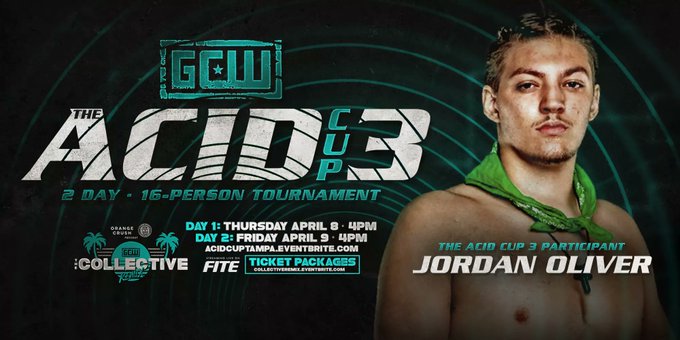 You’d be hard-pressed to find many wrestlers who have improved their game in the past year than Jordan Oliver. A regular with Major League Wrestling (MLW) and GCW, Jordan Oliver has become one of the top workhorses in the US indies – at GCW Fight Forever, he defeated Tony Deppen in a two-hour Iron Match. Over the past year, he’s scored huge wins over the likes of ACH, 2 Cold Scorpio, Ace Austin, Daniel Garcia, and former GCW World Champion AJ Gray, and earlier this month faced MLW World Champion Jacob Fatu on MLW Fusion. He made his Acid Cup debut in 2020 and made the semi-finals – beating Nick Gage in the Quarter-Final – and this year he’s got even more experience and a newly focused drive that makes him an earlier favorite to win the 2021 trophy. 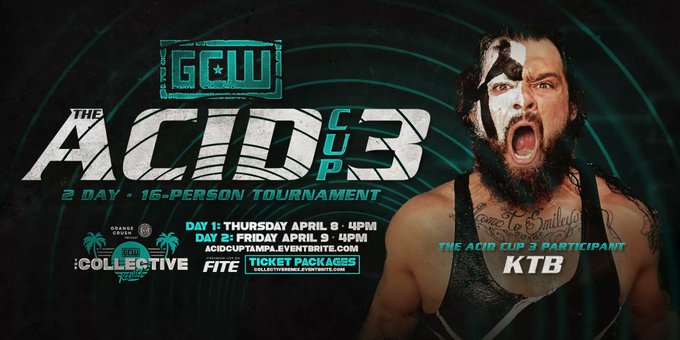 Another former GCW World Champion in the tournament, KTB returns for his second Acid Cup (he was in last year’s edition). A GCW mainstay since day one, KTB held the GCW World title for 350-days from 2016 to 2017. While he’s been more focused on tag team matches in GCW of late, teaming with Shane Mercer as Ironbeast, he’s still a dominant force in singles competition as well. Last fall, he made his debut with All Elite Wrestling  (AEW), where he competed on three episodes of AEW DARK. 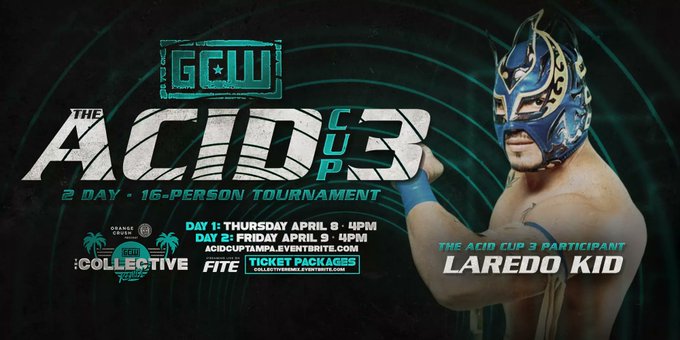 The third entrant from Mexico, AAA’s Laredo Kid returns to the Acid Cup for the first time since he made his GCW debut in 2016 at the inaugural tournament. Laredo Kid is a former AAA World Cruiserweight Champion (who recently had his 725-day reign ended by another GCW regular, Lio Rush, in MLW) and has competed for multiple promotions in the US over the years, including MLW, IMPACT Wrestling, PWG, Absolute Intense Wrestling (AIW), and AAW Pro, as well as multiple Mexican indies. 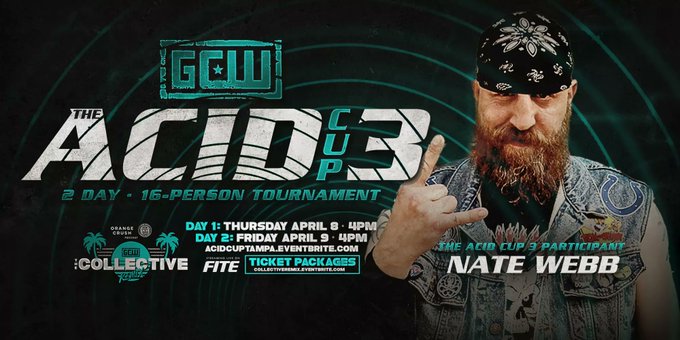 Another veteran of the US indies, “Spyder” Nate Webb has been a legend in the hardcore scene since his debut in 1999. A long-time mainstay with IWA Mid-South, where he’s a former 2x IWA Mid-South Junior Heavyweight Champion, Webb shifted over to GCW in 2018 and has become one of the locker room leaders and gatekeepers in GCW. Webb had a huge influence in keeping GCW going during the pandemic by helping turn his home state of Indiana into indie wrestling’s Covid-era Mecca, and now he enters his first Acid Cup to prove he’s still got a lot of fight left inside of him.

Check back with Last Word on Pro Wrestling as we get closer to WrestleMania Week, where we’ll be providing previews of many independent showcases throughout the week, including a look at the Acid Cup 3 opening round match-ups!