As of Sunday, Game Changer Wrestling (GCW) has revealed the first eight entrants of the 16-person field for this year’s annual Acid Cup 3, which will be held over two nights. It will take place on Thursday, April 8 and Friday, April 9, during GCW’s Collective Remix series of events held over WrestleMania Week in Tampa, Florida. GCW’s events are being held at the Cuban Club in Ybor City, in the northeastern section of Tampa. The Acid Cup was first conceived in 2016 as a tribute to the late indie pioneer Trent Acid, who tragically passed away in 2010, as a platform to showcase rising stars in the indie scene. The inaugural Acid Cup was won by Joey Janela before it was shelved for several years. It made its return in March of 2020 with Acid Cup 2, won by Chris Dickinson, and now continues on as an annual event. Here’s a quick rundown of the first eight entrants in the Acid Cup 3 tournament, as announced by Game Changer Wrestling. 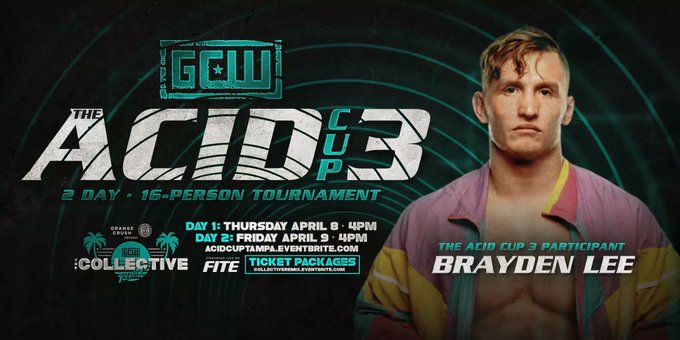 One of the multiple rising young stars from the Midwest, Indiana’s Brayden Lee was one of the many new wrestlers who made their GCW debut in 2020, and one of the few over the years to win their debut match. In a seven-wrestler scramble at Jimmy Lloyd’s D-Generation F at last October’s Collective, Lee outlasted Alex Ocean, Elayna Black (now NXT Superstar Cora Jade), Eli Isom, Griffin McCoy, Kung Fu Janela, and Sonico to pick up his first GCW victory. At January’s GCW Fight Forever 24-hour event, Lee competed three times, facing Myron Reed at GCW Wind of God and Shane Mercer at GCW Wrld on GCW III in singles losses, but won his second scramble at Jimmy Lloyd’s Up All Night. Lee has been a talent in the Indiana indie scene since 2018 and in 2019 broke out with IWA Mid South, where he’s already a 2x IWA Mid South Junior Heavyweight Champion. He’s also competed for the likes of CHIKARA, AAW Pro, Absolute Intense Wrestling (AIW), Black Label Pro, and ACTION Wrestling, and this past January made his debut with IMPACT Wrestling, where he faced Sami Callihan on an episode of IMPACT Xplosion. 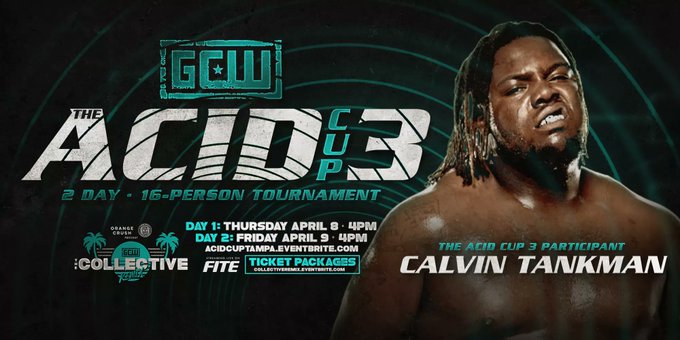 Another Indiana native and a former IWA Mid South Heavyweight Champion, Calvin Tankman exploded in 2020 with the likes of GCW, Paradigm Pro Wrestling (PPW), Black Label Pro, and Violence x Suffering (VxS). His meteoric rise last year also lead to him signing with Major League Wrestling (MLW), where he debuted this past November. He’s off to a huge 3-0 start in his MLW career so far and looks to be one of MLW’s breakout stars in 2021, but first, he’s got his eyes on winning the Acid Cup 3. 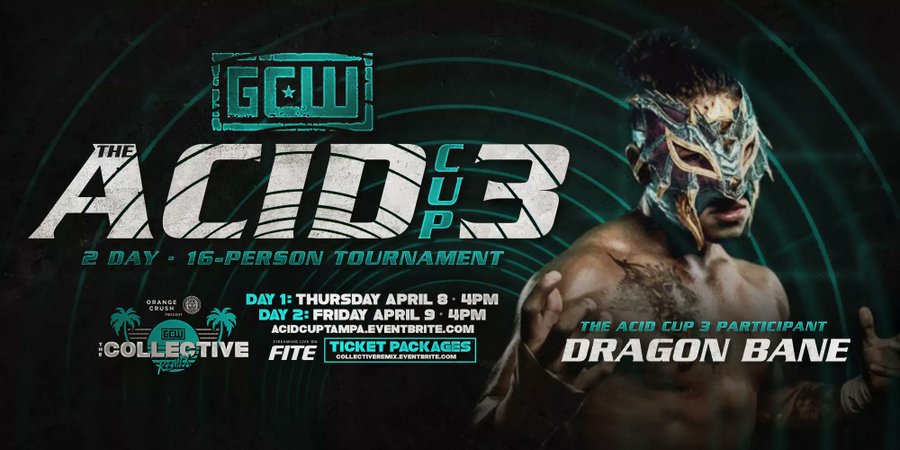 While he may not be familiar to many US indie fans, Dragon Bane has had an international presence for a couple of years now. The 21-year old luchador from Mexico City has been competing since he was an early teenager, working the Mexican independent scene since he was only 13. In 2018, he finally broke out, making his debut for AAA Lucha Libre, but his primary home in Mexico is International Wrestling Revolution Group (IWRG), where he debuted in 2015, and he’s the current reigning IWRG Intercontinental Middleweight Champion. In 2018, he made his US television debut with IMPACT Wrestling, in a match filmed in Mexico for IMPACT Xplosion, and in 2019, he made his Japanese debut with Pro Wrestling NOAH. He had a second tour with NOAH in 2020 as well. A gifted young highflyer, he’s making his GCW debut at Acid Cup 3. 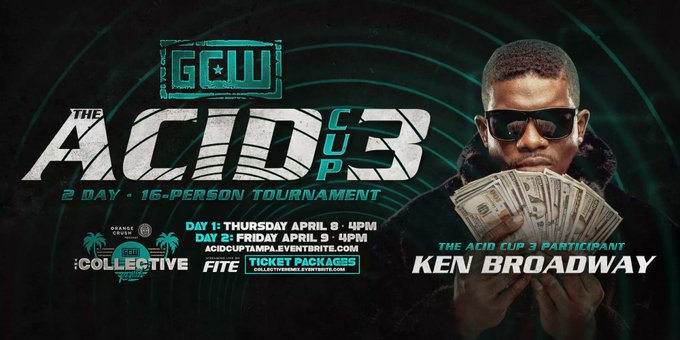 New York City’s Ken Broadway has been a star in the New York indie scene since 2013. A student of Amazing Red and House of Glory (HOG), he’s been a regular with HOG since his debut, where he’s a 2x HOG Crown Jewel Champion, with his second reign lasting 281-days. Over the years, he’s also competed for Combat Zone Wrestling (CZW), Beyond Wrestling, Wrestling Has A Tomorrow (WHAT), VxS, and even sporadic appearances with GCW since 2015 (he competed in the first Acid Cup in 2016). But after missing most of 2020, Broadway has turned 2021 into his year, returning to GCW at GCW 56 Nights on January 1, 2021 to defeat ACH, and has had big matches with the likes of Lee Moriarty, Saieve Al Sabah, Jimmy Lloyd, Treehouse Lee, and most recently, 2 Cold Scorpio, as Broadway looks to make 2021 his biggest money year to date. 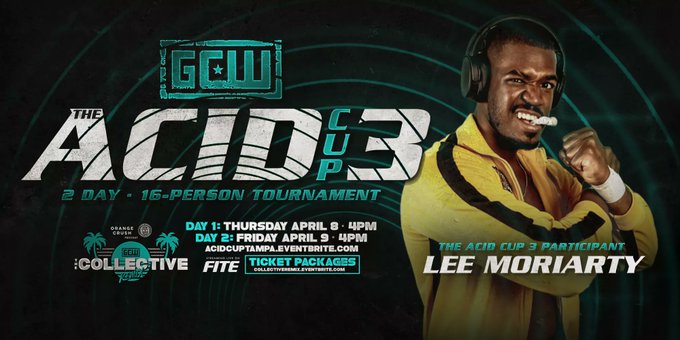 Arguably no other US indie wrestler made the most out of the pandemic year of 2020 than Pittsburgh’s Lee Moriarty. A standout in the Pennsylvania indies since his debut in 2015, by the end of 2019, his momentum was starting to gain national traction. In 2020, Moriarty exploded on the national stage, with huge matches against Alex Shelley, Nolan Edward, MV Young, and others. In June, at GCW The Wrld on GCW 2, he made his GCW debut against Tre Lamar, instantly becoming one of GCW’s new favorite stars. He would also break out into Black Label Pro, Beyond Wrestling, and others, collecting more Match of the Year candidates with the likes of Daniel Makabe, ACH, Alex Zayne, Chris Dickinson, and Blake Christian. This past October, he made his IMPACT Wrestling debut on IMPACT Xplosion, where he faced Suicide. Moriarty has climbed the ladder quickly and now enters 2021 as one of the top stars in the US indies period. 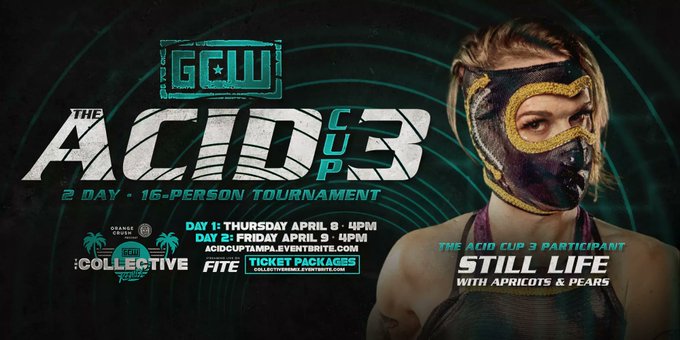 Another of 2020’s many break-out stars was Still Life With Apricots & Pears. A trailblazer in the exploding LGBTQ+ scene, she was arguably CHIKARA’s brightest young stars in the promotion’s final year of existence, where she went 18-2 in 2019 and won the 2019 Young Lions Cup Tournament. Since CHIKARA’s demise, she has become one of the principal stars of Camp Leapfrog and made her GCW debut at GCW EFFY’s Big Gay Brunch at last October’s Collective, where she had a Match of the Year candidate with Dark Sheik. She’s also competed for the likes of Hoodslam, Beyond Wrestling, Black Label Pro, and Freelance Wrestling, and this past December, she teamed with Boomer Hatfield & Molly McCoy to win the Camp Leapfrog Christmas Trios tournament. She’s also scheduled to compete in the first Cassandro Cup tournament in March and is currently competing in Enjoy Wrestling‘s Enjoy Cup tournament. Tournaments have become Still Life’s strong point and she could very well be heading into the Acid Cup on a four-tournament win streak. 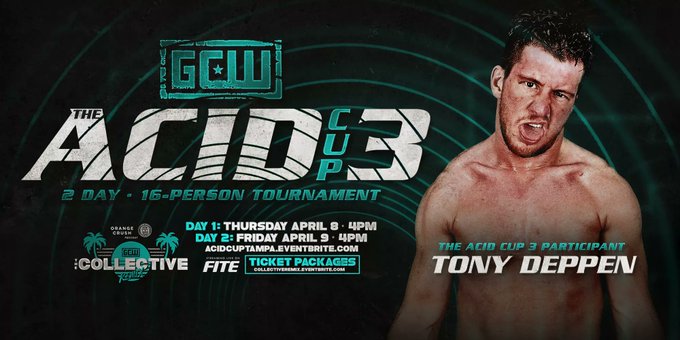 One of the names synonymous with GCW over the past few years has been one of its Gatekeepers in Tony Deppen. The veteran has been with GCW since 2016 and continues to have big match after big match. But his success isn’t relegated to just GCW rings – he’s also been a standout with CHIKARA, Beyond Wrestling, Synergy Pro, ICW No Holds Barred, VxS, and many more, including debuting with Ring of Honor last fall in the ROH Pure Tournament. He’s recently had two incredible ironman matches – one a two-hour match against Jordan Oliver at GCW Fight Forever, plus a 6o minute match against Trish Adora in Beyond Wrestling. Apart from competing in the 2020 ROH Pure Tournament, he competed in his first Pro Wrestling Guerrilla (PWG) Battle of Los Angeles in 2019 and won last year’s Garden State Invitational in Synergy Pro. 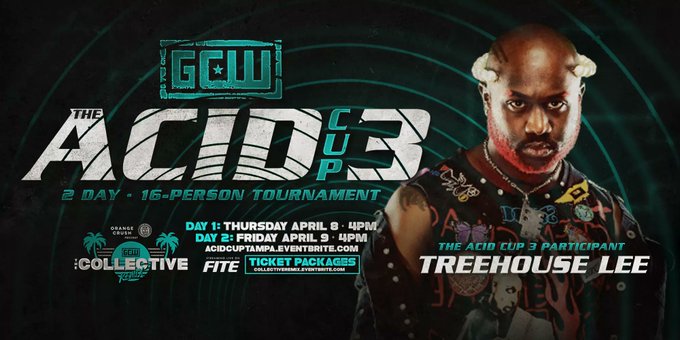 Treehouse Lee has been a rising star in the Florida indies since 2017, and finally broke out on a national level at the end of 2019 when he made his GCW debut at GCW Jimmy All The Way, where he was victorious in his debut Scramble Match. He returned to GCW for two more events in early 2020 before the pandemic hit, somewhat sending Treehouse Lee into hiding, just as the rest of the country was becoming aware of his amazing in-ring abilities. In December of 2020, he made his GCW return at Good Riddance, where he defeated another GCW return in Saieve Al Sabah. Two months into 2021, he’s rebuilding his momentum with strong showings in VxS and Florida’s No Peace Underground, and faced Joey Janela at GCW Wind of God during GCW Fight Forever. Expect him to have a solid showing at Acid Cup 3.