When Covid began to systematically shut the independent wrestling scene in early 2020, as US states and other territories around the world went into a series of lockdowns and precautions to control the pandemic, it seemed like the year would become a wash for the indie scene. It was seemingly catastrophic for multiple reasons, primarily financially for so many athletes who would now be losing out on their regular bookings. But it also looked to slow down a momentum that the US indies hadn’t seen in nearly 20 years since the initial indie revolution of the early 2000s. But in June of 2020, Game Changer Wrestling (GCW) became the highest-profile US indie to make the return to live events when it held The Wrld on GCW 2 in Indianapolis. Not only was GCW making it’s Indiana debut, but the success of the event lead to Indiana becoming a destination for multiple promotions – both home state and beyond – helping to bring the US indies back to its adoring public and restarting the scene’s momentum and helping usher in a new wave of indie stars who were willing to take the chance during these troublesome times. But this return not only restored the US indies, but it also helped reinvigorate a state’s position in pro wrestling history, one that it’s had a relationship ship for 100 years. 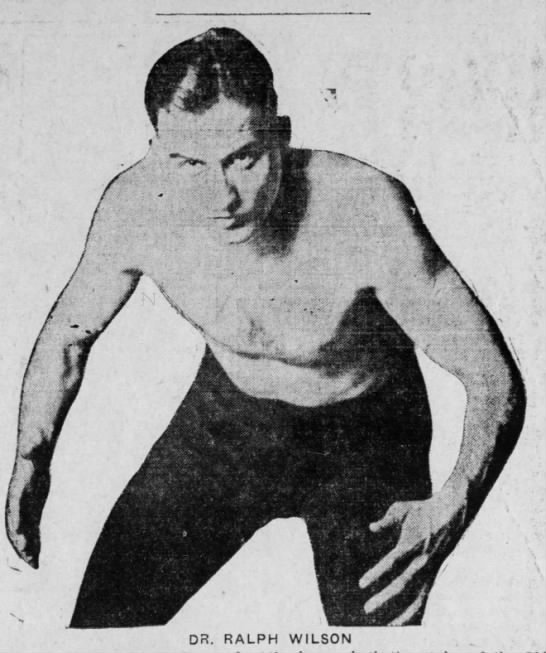 Professional wrestling has been a part of Indiana’s culture since the earliest days when W.H. Barton was promoting wrestling events in Indianapolis from around 1905 through the 1920s, and Evansville’s Francis A. Stagg running through the 1930s – his first card was in October of 1929, featuring Dr. Ralph Wilson vs. Casey Berger in the main event, with George Zaharias facing Emillo Costello in the semi. It was held at the Evansville Coliseum (now the Soldiers & Sailors Memorial Coliseum), which was originally built in 1916. In 1935, Lloyd Carter began promoting wrestling (in addition to his regular boxing events) out of his Hercules Athletic Club in Indianapolis (he also bought out Stagg in 1939). Carter promoted local fighters as well as bringing in touring grapplers from the original governing body, the National Wrestling Association (NWA) that founded in 1930. Not to be confused with the more well-known NWA (Alliance instead of Association), the original NWA, stars such as Lou Thesz, “The French Angel” Maurice Tillet, and more were regular competitors in Indiana in the 1930s and 1940s, until Carter stopped promoting in 1945. The original NWA would see the new NWA (National Wrestling Alliance) begin in 1948 and in 1949, both NWA World Heavyweight titles would be unified by Lou Thesz, with the new NWA taking over as the premier sanctioning body of pro wrestling in the United States. 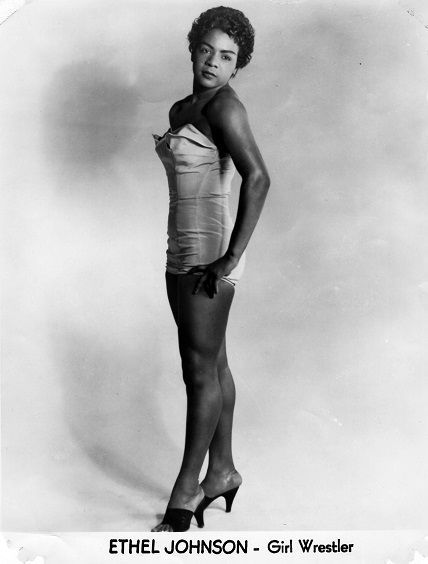 Indiana would become home to a pioneer in women’s wrestling, when Columbus, Indiana’s Ethel Johnson would become the first African-American woman to become a pro wrestler. Johnson would also be joined by her real-life sisters Babs Wingo and Marva Scott, but it would be Johnson who would enter the history books as having the most profound impact, training as a 16-year old under the tutelage of one of women’s wrestling’s biggest legends, Mildred Burke. By the end of the 1950s, she was working with the white women wrestlers, including such legends as June Byers and Penny Banner, as well as working NWA territories. She became a favorite of Stu Hart in the late ’50s, working for his then promotion, Big Time Wrestling in Western Canada (before it was renamed Stampede Wrestling), as well as working for Vince McMahon Sr‘s Capitol Wrestling (what would become the WWE). She worked for the NWA for most of her career, but in her final years, she was an active member of Verne Gagne‘s American Wrestling Association (AWA) roster, up until her retirement in 1976, after a 26-year career in the business. Her final match was against her sister, Marva Scott. 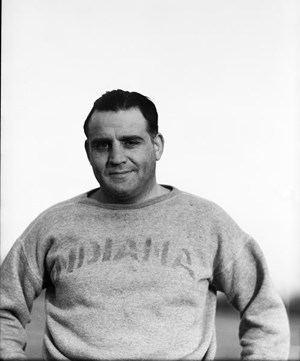 In 1950, promoter Billy Thom founded NWA Indianapolis as Indiana’s first territory within the new NWA. In 1955, Thom brought in partners in Fred Kohler and Jim Barnett, who had become the top promoters in the Chicago area, which expanded on the top stars coming into the Hoosier state. By the early 1960s, the business was seeing a decline, leading to Fred Kohler leaving the business in 1964, where he sold his ownership stakes to wrestlers Dick The Bruiser and Wilbur Snyder. Barnett wasn’t far behind, leaving for Australia to form the original World Championship Wrestling, and soon Bruiser and Snyder were the sole owners of the territory. 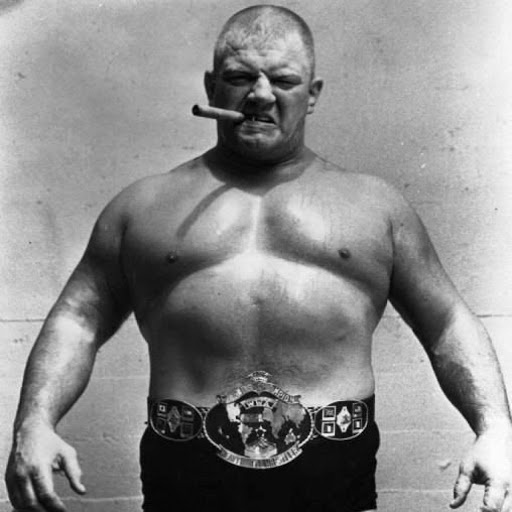 Delphi, Indiana’s Dick The Bruiser became Indiana’s biggest star in the Golden Age, who would co-found WWA and dominate the Midwest territories. 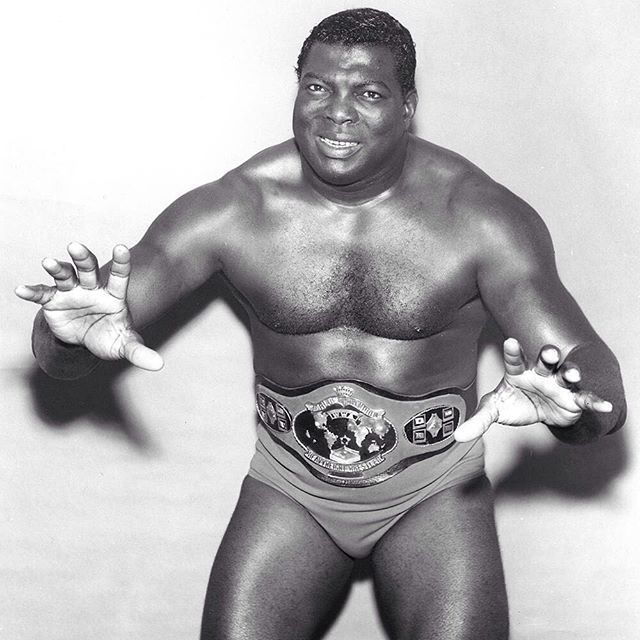 Bobo Brazil would be a frequent top star for WWA from 1964 until 1984, finally capturing the WWA World Championship in 1981.

The following year, WWA assumed control of NWA Chicago, the last of Kohler’s multi-decade dominance of the Illinois wrestling territory, and absorbed the territory into WWA. Based out of Indianapolis, WWA became the major promotion in Indiana, Chicago, and even pushed into NWA territory in Detroit as well. Dick The Bruiser would prove to be Indiana’s top “Golden Era” star, a rugged blue-collar grappler who proved popular in hard-working towns. He would go on to become a 13x WWA World Champion, alongside such other WWA World Champions as Gene Kiniski, Wilbur Snyder, Blackjack Lanza, Baron Von Raschke (3x), Chief Billy Red Cloud, Ox Baker, Ivan Koloff, Ernie Ladd, Bruiser Brody, Bobo Brazil, and Harley Race. 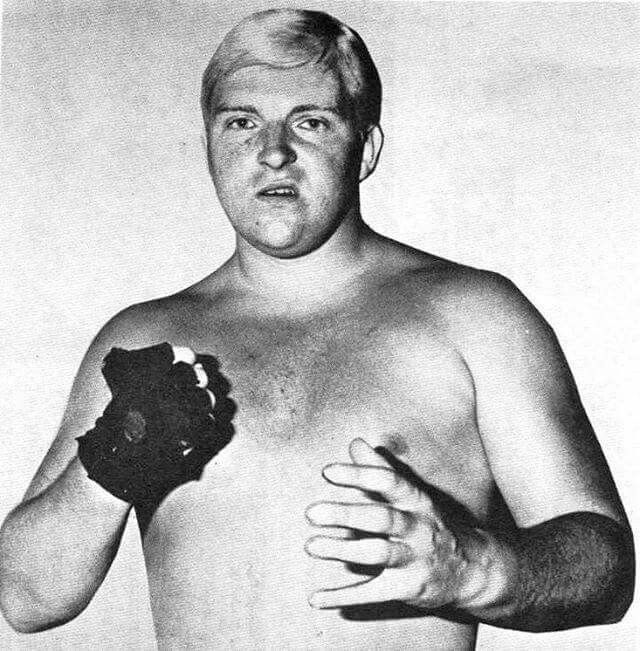 Born in Chicago but grew up in Indianapolis, Bobby Heenan started his career in his hometown with WWA, first as a wrestler, then becoming a Hall of Fame manager.

WWA would also develop many future legends, including Bobby “The Brain” Heenan, who would begin his wrestling career in WWA, where he wrestled as “Pretty Boy” Bobby Heenan. WWA would sadly see a major decline during the 1980s and would become one of the casualties of the major competition that Vince McMahon Jr.‘s World Wrestling Federation would bring in to the regions. WWA would finally shut their doors in 1987 – one of their final WWA World Champions was a former University of Michigan amateur wrestling standout Scott Rechsteiner, who won the title in August of 1986 and held it for 262 days – he would soon go on to become the man later known as “Big Poppa Pump” Scott Steiner. 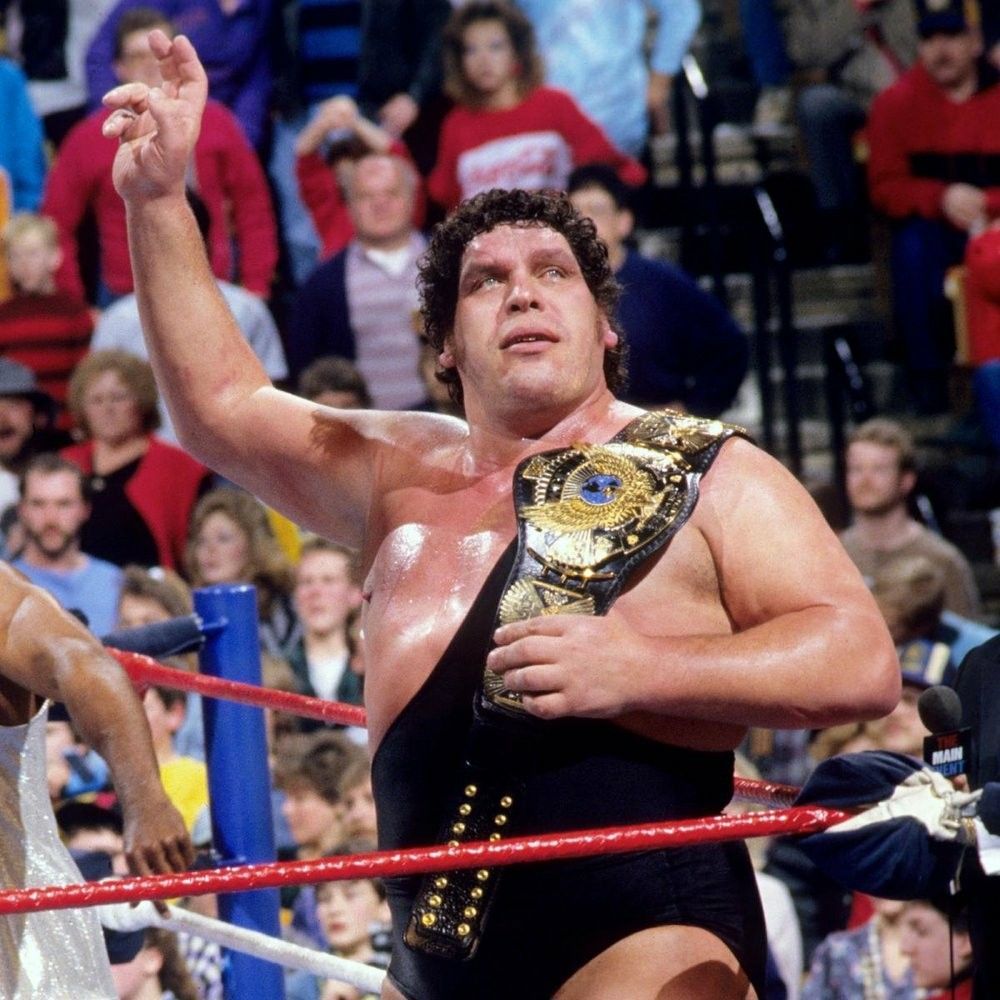 It would take Indiana several years to re-establish its wrestling identity, as entities like WWF took over. WWF held it’s first NBC special, The Main Event (where Andre the Giant finally defeated Hulk Hogan for the WWF World Heavyweight Championship), in Indianapolis at Market Square Arena in February of 1988, and continued to return frequently to the state for house shows/live events, including special events like The Main Event IV in Fort Wayne in 1990 (with Crawfordsville, Indiana’s own Ultimate Warrior defending his WWF World title against The Million Dollar Man) and 1992’s WrestleMania VIII at the Hoosier Dome, where Hulk Hogan defeated Sid Vicious and “Macho Man” Randy Savage defeated Ric Flair for the WWF World Championship. Indiana got its next PPV in 1996, In Your House 11: Buried Alive (featuring The Undertaker versus Mankind), and go on to house many episodes of Monday Night RAW and SmackDown! Other PPVS in Indiana included WWE Great American Bash (2006), WWE SummerSlam (2008), WWE Survivor Series (2012) and WWE Clash of Champions (2016). WCW would also utilize Indiana for live events and various episodes of Monday NITRO, but Indiana was predominantly a WWE-state for most of the 1990s. 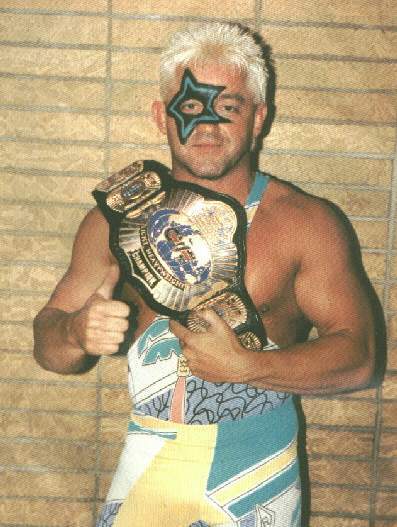 With the secession of WCW from the NWA in 1993 and ECW in 1994, the NWA was reduced to smaller independent promotions – all the major territories had been purchased and/or absorbed by either WWF or WCW. In 1993, “Nightmare” Danny Davis (a former Tennesse wrestler from the 1970s through 1990s, not to be confused with WWF Superstar and crooked ref “Dangerous” Danny Davis) opened NWA Ohio Valley in Jefferson, which would go on to become better known as Ohio Valley Wrestling when it too left the banner head of the NWA in 1997 (OVW has since relocated to Louisville, Kentucky). 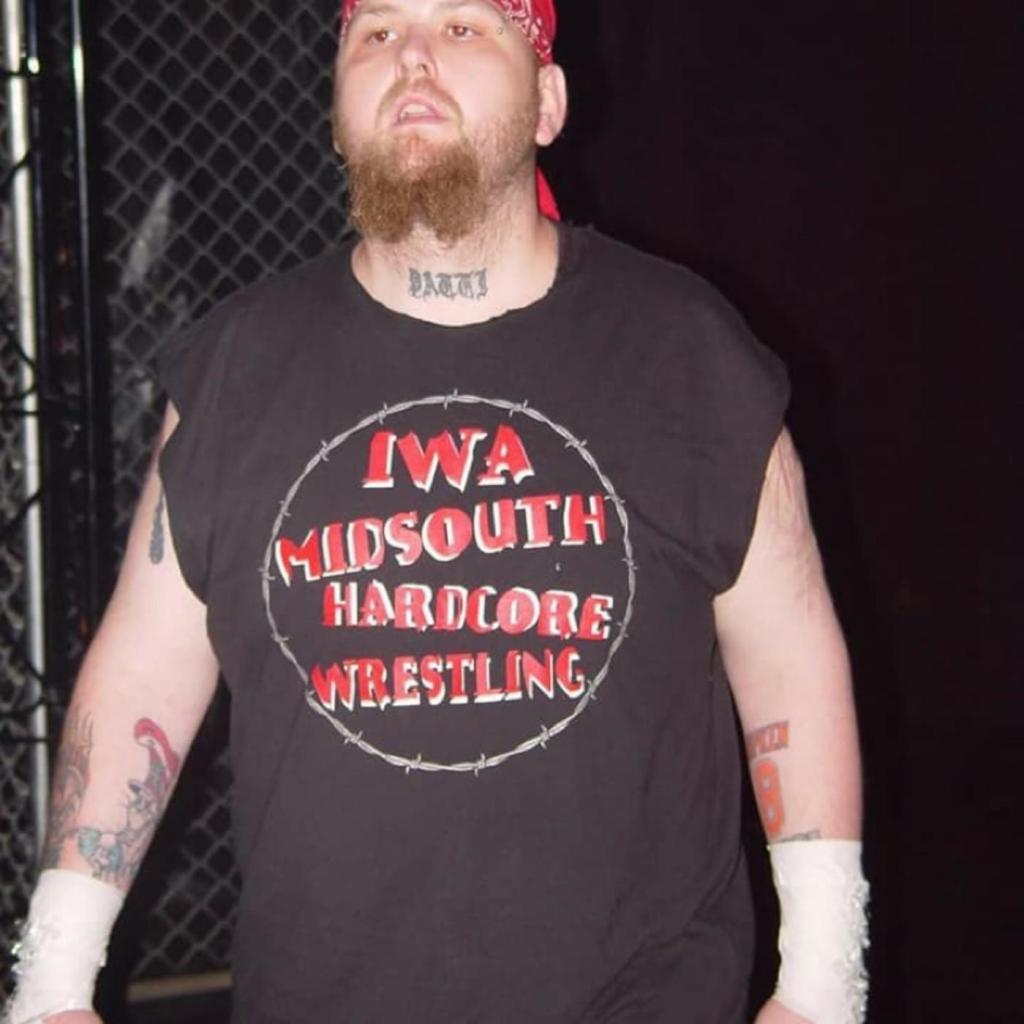 Former ECW star Ian Rotten opened up IWA Mid South, one of the US indies violent pioneers, in Jefferson, Indiana in 1996.

Throughout the 1990s, Indiana’s independent scene had to build up almost from scratch, with no real major promotion in-state. In 1996, inspired by the cult-like following of ECW, former ECW wrestler Ian Rotten opened Independent Wrestling Association Mid South (now known simply as IWA Mid South) in Jefferson. It’s rough and tumble presentation featured a level of hardcore even more extreme than ECW, with its first King of the Deathmatches event kicking off in October of 1997 (the tournament continues to this day). In 1997, Don Basher opened Wild Championship Wrestling Outlaws (WCWO) in Indianapolis, which still operates today with the Basher family, and in 1998, Jerry Wilson opened the doors on Hoosier Pro Wrestling (HPW), which also continues to operate. 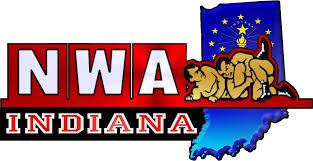 Indiana continued to find its independent identity, some continuing under the NWA banner like NWA Indiana (run by Shawn Cook, Guy Lombardo, and Marc Houston from 2005 to 2010) and NWA Underground (run by Merle Ramsey and Eric King from 2007 to 2011). But while Indiana’s growth in the indie department was miles from where it was following the end of WWA in 1988, it failed to have a promotion beyond IWA Mid South that was gaining any notoriety outside of state lines – and even IWA Mid South was only really an entity for hardcore and deathmatch enthusiasts. While Indiana was producing world-class talents like Nick Densmore (WWE Superstar Eugene), hardcore star Drake Younger (now a referee in NXT as Drake Wuertz), Queen Sharmell, WWE Superstar Sarah Logan (also known as Crazy Mary Dobson in the indies), hardcore veteran “Spyder” Nate Webb, as well as veterans like Ultimate Warrior, Dick The Bruiser, Rip Rogers, B. Brian Blair, and Roger Kirby, it was losing most of its indie prospects to other territories in order to advance their careers. 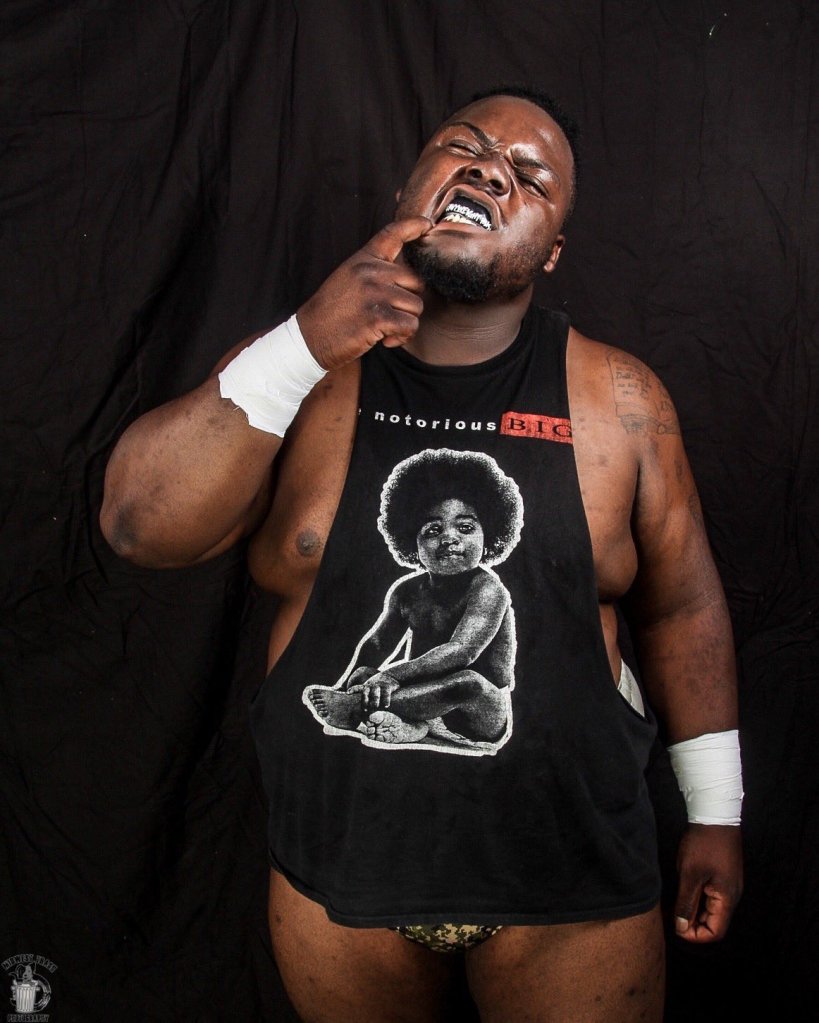 Calvin Tankman from Newcastle, Indiana had a breakout 2019 that saw him sign with Major League Wrestling in 2020 and became a big player with top indies. (Photo: Midwest Trash Photography)

But in the past handful of years, Indiana’s indie scene has gone from a slow bubble of possibilities to a hotbed of talent – not just in the rising tide of new indie stars like Calvin Tankman (who signed with Major League Wrestling), Lee Johnson (now a part of All Elite Wrestling), Cole Radrick, Billie Starksz, Akira, Levi Everett, Freddie Hudson, Ace Perry, Sage Phillips, and more, but in the number of indie promotions that have become tier one indie promotions in a short amount of time – they have found themselves as part of the bloodstream of the current US indie climate and added their own beats to its pulse. Indiana continues to house several top tier two promotions of there own as well, including Black Label Pro, Paradigm Pro Wrestling, Bizarro Lucha, EMERGE, and many others, who help nurture developing talents, while these new bold voices combine national and international talents amongst the creme de creme of Indiana grown as well. 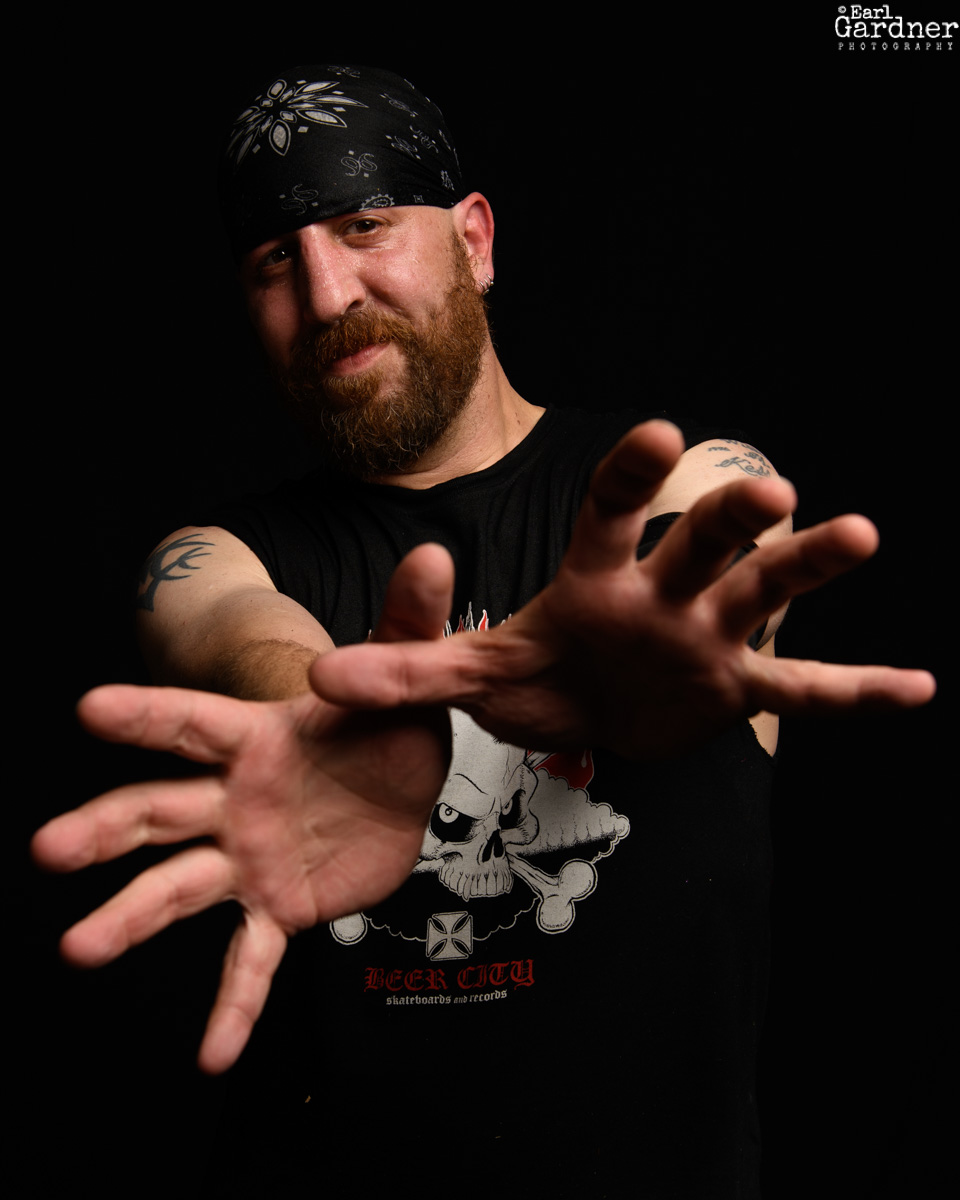 “Spyder”Nate Webb is a 20+ year veteran of the US indies and a huge part of GCW’s success in his hometown of Indianapolis. (Photo: Earl Gardner)

In 2020, Indiana became the indie Mecca for a year nearly lost due to the covid-19 pandemic, first with Game Changer Wrestling (GCW)’s 2020 return (and Indiana debut) with The Wrld on GCW, Part 2 in June. Since then, GCW has returned on multiple occasions and has seen other promotions from the US Eastern seaboard also making the trip to hold events. Arguably no US state has seen such a huge spike in influence in a wrestling scene in a long time than Indiana, who went from near-forgotten three years ago, to one of its most important.