AEW is set to officially launch AEW Dark: Elevation with the debut episode airing on March 15th exclusively on Youtube. The show will continue to air weekly, every Monday night. Recent big-time acquisition Paul Wight will be doing color commentary duties for the program alongside the legendary Tony Schiavone. “The American Nightmare” Cody Rhodes was asked on a recent press call what makes Elevation unique compared to Dark and also Dynamite? He stated that Elevation will be focused on “individual personalities” and will showcase the grit, determination, and motivation of the athletes competing on the show. The card is loaded to the brim with great and intriguing matches. Monday is almost upon us all so without further ado the full list of matchups on the Dark: Elevation card.

– A Feature on #AEWRisingStar Lee Johnson 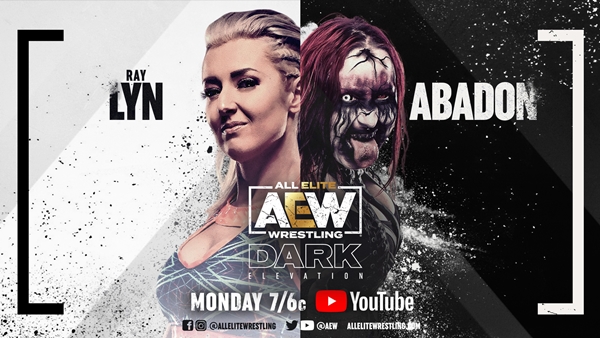 Ray Lyn, a veteran of the independent scene, gets her big break against the monster from Black Hill, Abadon. Lyn will get the biggest spotlight possible as she makes her All Elite Wrestling debut on the first episode of the debuting Dark: Elevation. Look for her to impress as she has a tough opponent in front of her in the form of the enigma known as Abadon. Jorel Nelson and Royce Isaacs will also be making their debut in the inaugural edition of Elevation. The team is best known on the indie scene as “One Percent.” The duo has been teaming for roughly about three years now and will be looking to make an impact against the high-octane offense of brothers Matt and Mike Sydal. Two teams with different goals in mind but equally wagering high stakes. Will the Sydal Brothers come on top or will Nelson and Isaacs make an indelible mark in their debut?

Big Swole will be making her return in an AEW ring since competing on Dark way back in January of this year. As she faces off against Pennsylvania-native and fellow returning competitor Skyler Moore. The two have faced off before on the September 25th, 2020 edition of Dark with Swole coming out on top. Will Big Swole replicate the results or will Moore turn the tables this time?

Tay Conti is looking to improve her already impressive record of 10-3 in singles competition against the returning Ashley Vox. Vox competed on the last Dark of 2020 against fellow NWA star Thunder Rosa. She was unsuccessful in her efforts but is looking to bounce back from that defeat. She will have to go through the Brazilian Jiu-Jitsu marvel before she even dreams of victory. Will Conti extend her reign of dominance with -1 by her side no less or will Vox pull off the ultimate upset?

An All Joshi Main Event Ahead of the first-ever women’s main event in Dynamite history between Dr. Britt Baker, D.M.D, and Thunder Rosa, Riho and “The Cutest in the World” Maki Itoh will headline the first episode of Elevation. They will make history as the first two women ever to headline any All Elite Wrestling show since its inception back in 2019. Riho recently made her return to the US in the Women’s World Championship Eliminator tournament fighting valiantly but unfortunately falling short to win it all. Itoh-chan would closely mirror her fellow Japanese star’s path as she would get bounced in the first round of the Japanese bracket of the tournament falling to eventual tournament winner Ryo Mizunami.

The whole world will be watching as these two women are expected to put on a show worthy of the main event. Do not let the size of these two fool you. They may be short in stature but they’re big in heart and has no shortage of ways to incapacitate an opponent. Will the first-ever AEW Women’s World Champion Riho make history once again in winning this contest or will Maki Itoh foil those plans and claim the win for herself? Find out Monday night on Youtube! It’s Elevation time!

Stay tuned to the Last Word on Pro Wrestling for more on this and other stories from around the world of wrestling, as they develop. You can always count on LWOPW to be on top of the major news in the wrestling world, as well as to provide you with analysis, previews, videos, interviews, and editorials on the wrestling world.  You can catch AEW Dynamite Wednesday nights at 8 PM ET on TNT, don’t forget to check out AEW Dark: Elevation on Monday nights at 7 PM ET and AEW Dark Tuesday nights at 7 PM ET on YouTube.