Synergy Wrestling is taking part in IWTV’s Showcase Of The Independents during WrestleMania weekend 2021.  Synergy VS has already had some matches and talent announced for the event.  Let’s take a look at what’s currently scheduled for Synergy Wrestling’s WrestleMania offering

KTB steps up to rep Synergy #Wrestling against two of the baddest men in the Midwest — & he's got major backup. pic.twitter.com/x2N5WYKms1

In tag team action we will see IMPACT Wrestling X-Division star Rohit Raju in action.  Raju and Karam have been fixtures in AAWPro for some time where Raju is the current AAW Heritage Champion.  IRONBEAST has been known to compete in Game Changer Wrestling (GCW).

Myron Reed has been announced as a participant on this show.  The 23 year old is most known for his work in Major League Wrestling (MLW) as part of Injustice, but he has also had notable indie runs in AAW and Glory Pro Wrestling.

Daniel Garcia is another name confirmed for the show. “Red Death” Garcia is one of the Buffalo Brothers and has made his name mostly in Canadian-based promotions. Garcia has recently appeared on WWE as enhancement talent.

TJ Crawford, a Create-A-Pro graduate is also announced for this Synergy Wrestling event.  Crawford is a former Synergy Cruiserweight Crown Champion and has competed for promotions like Beyond Wrestling, Violence X Suffering (VxS), and Combat Zone Wrestling (CZW) among others.

Cole Radrick is the final name announced for the show without a match scheduled.  Radrick has been making a name for himself over the past year, most notably in GCW.  If not for COVID-19 it is likely that Radrick would have established himself as one of the top names on the indies in 2020. 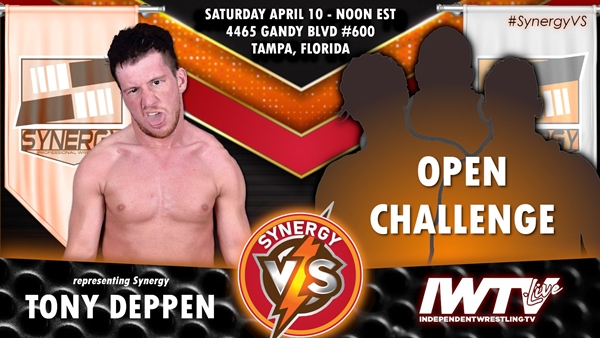 Tony Deppen has become one of the hottest names in the US indie scene recently thanks to his 2-hour match with Jordan Oliver, and another lengthy match with Trish Adora.  At Synergy Wrestling Deppen presents himself with a new challenge, an open challenge to be exact.  His opponent could be absolutely anyone!

Synergy will also be confirming FOUR different matches at their upcoming SOS event.

Stay tuned to the Last Word on Pro Wrestling for more on this and other stories from around the world of wrestling, as they develop. You can always count on LWOPW to be on top of the major news in the wrestling world, as well as to provide you with analysis, previews, videos, interviews, and editorials on the wrestling world.  Subscribe to IWTV to check out the many amazing companies on that service