New Japan Pro Wrestling is starting a brand new tour in February known as Castle Attack. This tour will be headlined by two major shows in Osaka Jo-Hall which will be happening this weekend. On this tour’s first night, we will see two rivalries possibly end as Bullet Club‘s top members face off against CHAOS‘ top workers, with the theme of this show being Bullet Club vs. CHAOS. On Night Two, we will see a new champion crowned, a possibility of the ending of the IWGP double titles, and more. Let’s get into this preview of Castle Attack!

Toru Yano looks to defend his KOPW 2021 trophy against Bullet Club member Chase Owens. Both men have a short history together, with just recently both men being part of the KOPW 2021 match at Wrestle Kingdom 15. With Toru Yano winning that match, as of recently, the match’s stipulation has been hinted at as a strap match. With the history of Yano and the trophy, he is a heavy favorite in this match and could win easily. 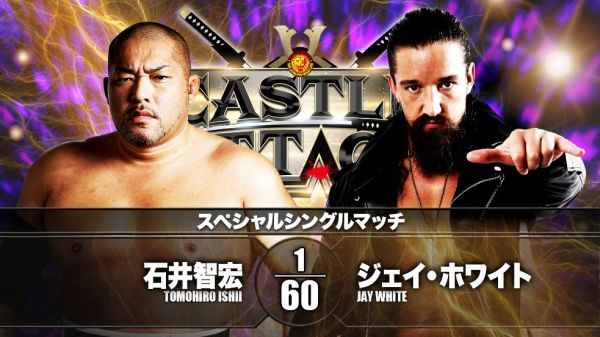 At Wrestle Kingdom 15, Jay White would lose in his double title match against Kota Ibushi. This match would cause Jay White to announce his departure from the company and would leave in a five-star match featuring Bullet Club vs. CHAOS. During this match, White was pinned by Tomohiro Ishii. Three weeks later, White would make his return to New Japan, going after Ishii and the NEVER Openweight Six-Man Tag Team Championship. While the match was a losing effort for White, “The Switchblade” wanted Ishii. Jay White will get Tomohiro Ishii in the semi-final of the first night of Castle Attack.

The background of these two histories has been based in G1 Climax matches, with Tomohiro Ishii defeating Jay White twice. The match seems to heavily favor Ishii, considering the match record. However, White has become more ruthless since he came back and could start gaining victories over top talent. This may start following his match against Ishii. 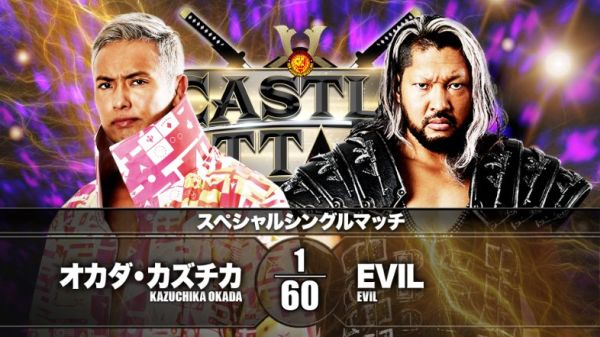 On the last New Japan Cup Show of 2020, Kazuchika Okada would face Evil in the finals of that tournament. This match seemed like an easy win for Kazuchika Okada. However, it would lead to a major upset with EVIL defeating Okada and later turning on him to go after Naito and the championship. After that turn, Evil and Kazuchika Okada would go separate ways until January of this year with an angrier more dedicated Kazuchika Okada. Kazuchika Okada has been calling out EVIL for multiple weeks, wanting to have a singles match against EVIL.. this would all come to a head at Night Two of New Beginning In Hiroshima.

Both men faced each other in a tag match. This match would end via disqualification and would eventually become a singles match, which would also end with DQ. Evil doesn’t see the point of this match and walks to the back with Okada coming in, hitting Evil with a chair. The main event of Kazuchika Okada vs. EVIL will be the seventh match of the series and will be the second time these two have faced off in Osaka Jo-Hall in singles action. This match does have a possibility of crowning a possible contender for Tetsuya Naito or Kota Ibushi soon. Just considering it’s the main event. 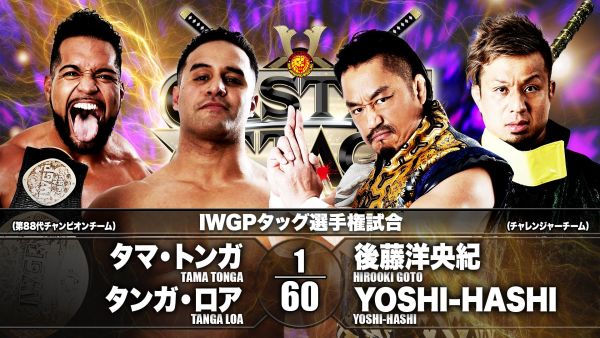 When Jay White made his return to NJPW, he would do it with the help of Tama Tonga and Tanga Loa. From there, they went after CHAOS’ NEVER Openweight 6-Man Tag Team Titles. This would lead to the trios match where YOSHI-HASHI picking up the victory in that match. Afterward, Hirooki Goto faced off against Tonga and Loa. Yoshi-Hashi has been on a winning streak in title matches as of late. Thus, this match could lead to another major moment with YOSHI-HASHI possibly winning his second ever championship in NJPW. Hirooki Goto, a tag team specialist in his own right, looks to win the IWGP Heavyweight Tag Team Championship for the first time since 2015. This is also the second title defense for Tama and Tanga.

This match was originally supposed to be an IWGP Junior Heavyweight Title Match between El Phantasmo and Hiromu Takahashi. Following an injury, Takahashi had to vacate his championship. During the Castle Attack Tour, El Phantasmo would go into a feud against El Desperado. El Desperado and Yoshinobu Kanemaru would challenge for the IWGP Junior Tag Team Championship in a rematch from Road To New Beginning. Desperado and Kanemaru would regain their titles. BUSHI was supposed to team with Hiromu Takahashi to go against ELP and Taiji Ishimori. This match never happened, which leads to our triple threat title match on Night Two of Castle Attack.

It seems like El Phantasmo is the heavy favorite for this match; he was the original challenger and currently doesn’t have a championship. BUSHI is the underdog of this match and has little chance of winning, but could go under the pressure and become the IWGP Junior Heavyweight Champion for the first time since 2016. The other challenger, El Desperado, is in the middle favorite due to how the Best of the Super Juniors XXVII ended with El Desperado unmasking in his bout against Takahashi. This unleashed another side of Desperado –  a side that we could see in full effect once more in this important IWGP Junior Heavyweight Title Match. Desperado has never held the IWGP Junior Heavyweight Championship; this match could make him a double champion as well.

'It's closer to me than anyone. I should end it.'
A day away from his title bout, Tetsuya Naito gives his true feelings on the IWGP Intercontinental Championship:https://t.co/6aFPm8IDsD#njcattack #njpw pic.twitter.com/y46u7W0C7E

The End of the Double Titles?

In the main event of Castle Attack: Night Two, we will see for the first time since early 2020 an IWGP Intercontinental Championship match in a Wrestle Kingdom 15 rematch between Tetsuya Naito and Kota Ibushi. Firstly, background: at New Beginning in Hiroshima: Night Two, Ibushi would defeat SANADA to retain his double championship. After the match, Naito would come out and challenge Ibushi for one championship, the one that has brought him the most pain: the IWGP Intercontinental Championship.

This title is one that Tetsuya Naito has vandalized in his career. Now, Naito looks to gain an appreciation for that belt and wants to stop Kota Ibushi from unifying the titles, which is the champion’s main goal now. In terms of match history, these two fighting for the IWGP Intercontinental Championship are something that could’ve been expected. After all, the original series was based on this belt. At Wrestle Kingdom 15, Ibushi picked up the vital win over Naito. This match will mark the 13th match in the series between these two. Will Kota Ibushi retain the IWGP Intercontinental Championship and unify the championships or will Tetsuya Naito stop him? We will figure this all out at Castle Attack in Osaka-Jo Hall!