When All Elite Wrestling was created, it was made clear by the Young Bucks in the very first event that they were going to have the best tag team division in the world. Something incredibly believable considering they had Matt and Nick Jackson to start it off and soon enough that same night, The Lucha Bros. Since then, they have added incredible teams to the roster to truly create the best division in the world. Yet, here we are in 2021 and the division is not everything it has lived up to be. And as we approach Revolution, it will be another PPV where the AEW Tag Team Championships are on the line with one of the teams being a makeshift team.

AEW should have the best division in the world, but their continuous mishandling of it makes it difficult to get behind on a week to week basis. They have had matches that get fans on their feet and have them celebrating it online. But the storylines aren’t consistent, teams who aren’t ready get shots while their best get mistreated and take a back seat time and time again. Let’s look at the struggles they’ve endured to this point and the solutions that could be made to fix it once and for all and finally be treated like the best tag division in the world.

Makeshift Teams Getting Opportunities Instead Of The True Teams 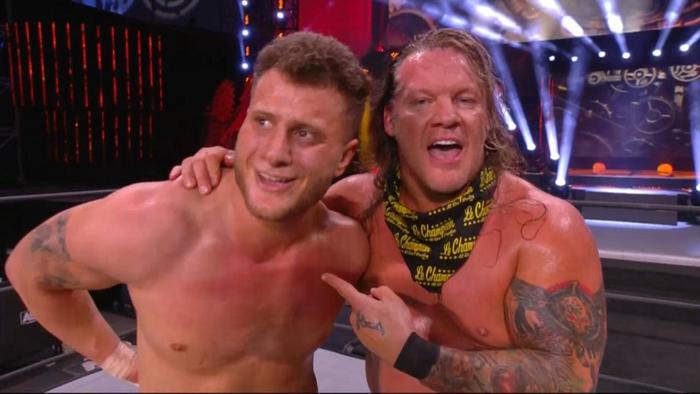 The longest reigning AEW Tag Team Champions to this point are Hangman Page and Kenny Omega. They were not a real team and it was proof when they went their separate ways following the loss to FTR at All Out. As the company heads into Revolution, Chris Jericho and MJF will be getting a shot at the titles following their battle royal win. It’s another situation where they prefer to tell stories through their division that have nothing to do with tag team wrestling instead of giving their true tag teams a chance. It’s a continuous problem that has crowded the AEW Tag Team Championships for nearly a year.

Jumping The Line: FTR Skips Ahead Of Longer-Tenured Teams To Win Titles 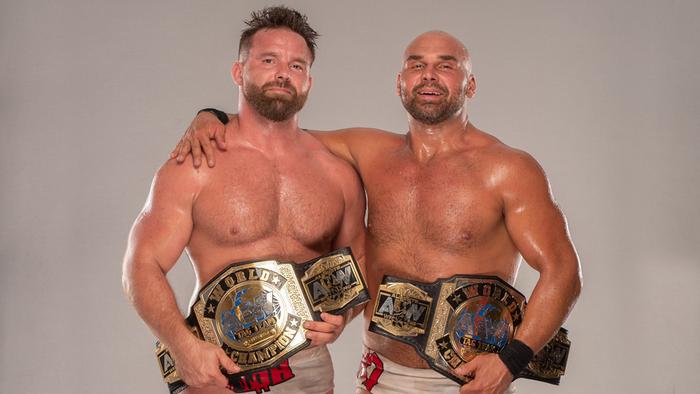 On April 10, 2020, The Revival was released from their WWE contracts and soon after signed with AEW under the new name of FTR. They were instantly propelled into the title picture and won the titles at All Out by defeating Hangman Page and Kenny Omega. We bring this up because they got the championship match not even six months into their tenure with the company. While the main reasoning was to lead to the massive match between FTR and the Young Bucks, they skipped ahead of so many teams who have been a part of the grind since the beginning in AEW. It’s almost as if those rankings AEW created meant nothing. The Lucha Bros, Santana & Ortiz, and The Dark Order are just among the many teams to be left out for FTR to jump over them so they could rush the so-called “dream match.”

It’s booking people shouldn’t have expected AEW to do as they wanted to revolutionize the wrestling industry. This handling sure made them feel like a certain corporate wrestling monster that they call themselves the alternative of. Laziness and the mistreatment of the teams who have earned shots through their work.

The Best Teams Don’t Get The Shine They Deserve

The list seemingly goes on for incredible tag teams in AEW. But the list also goes on for those teams who have yet to be properly handled in AEW. Lucha Bros are finally picking up the steam they deserve as the reformed Death Triangle with PAC, but for a long time there they were ineffectively used and it was a real problem. Evil Uno and Stu Grayson have almost been exclusively featured on AEW DARK instead of television as a team, which is a mistake considering how good they are and how over The Dark Order continues to become. Look at Jurassic Express. Jungle Boy and Luchasaurus continuously receive the loudest reactions, but nothing in terms of rising up the card. Only recently has their feud with FTR given them the rightful shine they deserve. Then there’s Santana & Oritz (aka Proud N’ Powerful) who have been in AEW for over a year and have yet to receive a match for the AEW Tag Team Championships. The problems for the best teams outside of the Young Bucks remain and hurt what should be the best tag division in wrestling. 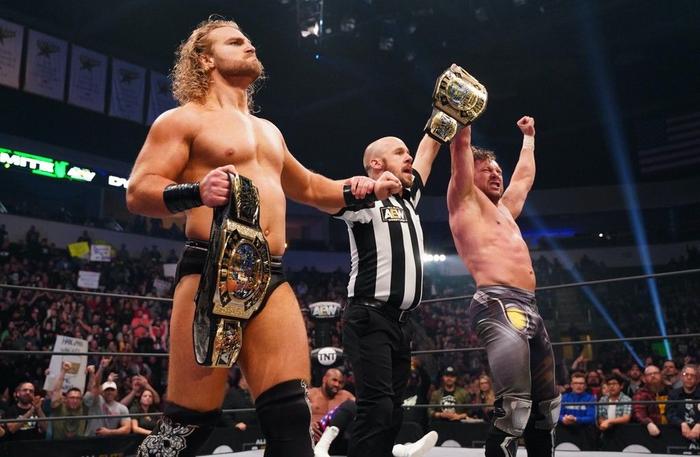 The solutions are very easy for some problems. The makeshift tag team gimmick has got old fast in AEW. While it is a great trick in the book to develop rivalries and further stories, having them in the title hunt for every AEW PPV defeats the purpose of the rest of the tag team division. We are heading towards another PPV where that is the case as Jericho and MJF try and take the titles from the Young Bucks. It’s a good trick in the book when it isn’t overused. We have got to that point in AEW. After Revolution, AEW really needs to embrace the fact they have incredible tag teams already made and willing to contend for the gold. These teams can tell stories too. Make it seem as though you believe in them.

Listen To The Fans: Give Jungle Boy & Luchasaurus Their Grand Opportunity Instead Of Team’s Who Are Not Ready 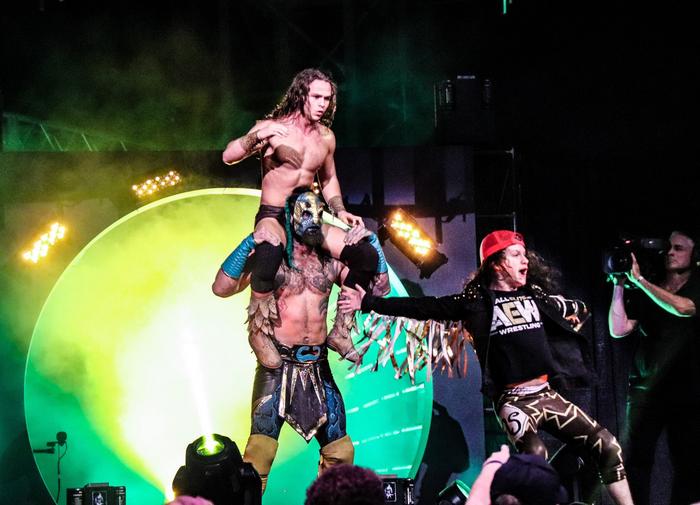 We have touched on this already but it is necessary to do it again. Since the very first time they teamed together at Fight For The Fallen in 2019, Jungle Boy and Luchasaurus have been fan-favorites. Somewhat stunning, as “The Boy and his Dinosaur” act were fresh but felt they were together forever. Add Marko Stunt to the mix and you get the Jurassic Express. There’s something special about this team that not many tag teams can capture. Jungle Boy is going to be a world champion in the future — that’s for certain. Luchasaurus could have his own run considering how great he is in the ring. But together, they have this magic. Lovable? Yes. Entertaining? Absolutely. One of AEW’s best tag teams? You bet.

This past August, they got their first and only shot at the AEW World Tag Team Championships when they faced Omega and Page. The roof was bound to blow off as these two teams put on a show. And while they walked away with a defeat, they felt like stars that deserved to be on that level. A solution to AEW’s mishandlings is to listen to the fans. At Beach Break, they were singing Jungle Boy’s theme song mid-match because he is that over. Luchasaurus had a splurge in the match that got fans to their feet. Give them a shot. Not only a title shot, but a PPV shot where they can show the world that they are the team. Jurassic Express is special and it’s time AEW accepts that.

Allow Santana & Ortiz To Rid Themselves Of The Inner Circle

Their team name since joining AEW is Proud N’ Powerful. But when you look at their run in the company to this point, it’s tough to be proud of much. Sure, Santana & Ortiz have that excellent Parking Lot Brawl against Best Friends to put on their resume, but outside of that, there isn’t much. Working alongside Chris Jericho should have meant opportunities left and right. But instead, they have taken a back seat as a tag team to him instead. Whether it be the Jericho-MJF tandem, Le Sex Gods, or his Jericho’s teaming with Jake Hager, it sure feels like Santana & Ortiz are far away from what they were when they joined the company. Running in to attack the Young Bucks and Lucha Bros at All Out? That should have meant big things but instead, they were regulated to Inner Circle lackeys.

If you watched their run in IMPACT, you understand how good this team is. After all, they were four-time IMPACT World Tag Team Champions as they represented LAX and had absolute wars with teams. Whether it be their storied rivalry with Pentagon and Fenix or their battles with the OGz Homicide and Hernandez, these two were the real deal as a team. They have long been the real deal but AEW has failed to execute that on television. What they must do is free them from the Inner Circle and let them follow their own path. They should and will be AEW World Tag Team Champions one day as that is the spot they are destined to be in. They’re a top team in the world. Let Santana & Ortiz show the world the truth.

Ringsiders Wrestling Present: Interview With Mike Verna
Will Edge and Roman Reigns Face off at WrestleMania 37?