During the 2021 Royal Rumble Rhea Ripley finished as the runner up and even finished with the most eliminations in the women’s Royal Rumble with seven.  It’s generally considered that this was Ripley’s call up as she hasn’t been seen on NXT since her defeat on January 6th at New Year’s Evil where she put over Raquel Gonzalez.  We take a look at where Ripley may go from here after her impressive showing in the Royal Rumble.

If She Goes To SmackDown: Feud With Tamina

During the Royal Rumble, they went out of their way to clear the way for Tamina and Rhea Ripley to throw hands.  Tamina hasn’t been pushed much but the visual of her and Ripley fighting is enough to make it a great first feud for Ripley as Ripley can get a clear win to propel her to the top of the division.

If She Goes To RAW: Feud With Alexa Bliss

During the Royal Rumble match, Alexa Bliss was clearly on the way to embracing her inner demon when she was thrown out by Rhea Ripley.  There is no way that Bliss is going to let that infraction go without punishment.  Ripley is the kind of cool and fearless competitor who could face down the many faces of Alexa Bliss which would go a long way to showing main roster audiences how cool Ripley is.  The issue here is neither woman can afford to lose but it would immediately insert Ripley into a headline feud on the show. 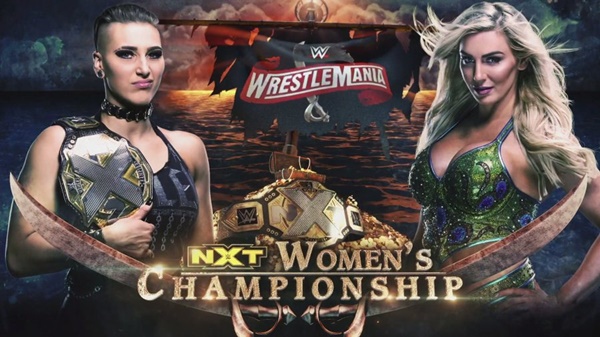 Last year at WrestleMania Charlotte Flair defeated Rhea Ripley to win the NXT Women’s Championship.  This feud was Ripley’s biggest feud to date but Ripley never got payback for her defeat, it was Io Shirai that took the title from Flair in a triple threat match.  The best way to showcase Ripley’s growth would be to have her and Flair go face to face once again, but this time have Ripley come out on top to create a new star in the women’s division, as both could do with some.