When it comes to professional wrestling, it’s the rivalries, stories, and matches that make such incredible magic that fans remember forever. In many instances, that is what makes people fans of the sport to begin with. Whether it be the historic rivalry between Hulk Hogan and Andre the Giant, the story of the Mega Powers, or the real bad blood that led to wrestling greatness between Bret Hart and Shawn Michaels, there was something that captured fans forever. Then, if you were able to watch WWE during the time of the Attitude Era, it was the rivalry between The Rock and “Stone Cold” Steve Austin that locked you in. Two top talents on the top of the world of pro wrestling making each other better every single day. There isn’t a bigger combination in history for WWE. That’s where the rivalry between Bayley and Sasha Banks comes in.

Bayley and Sasha Banks have become a historic duo, whether together or facing each other, as they make one another better day in and day out. Their rivalry is bigger than WWE at times as they helped inspire a change in WWE that was long overdue. And that is why they are the new version of The Rock and “Stone Cold” Steve Austin. They aren’t necessarily as big in terms of completely changing the way wrestling is seen as Rock and Austin did. But what they mean to each other, what they are able to deliver, and what they have become for WWE is why they are the present version of The Rock and Steve Austin.

Here we take a look at how the historic chemistry between both these rivalries changed wrestling for the best and how they bettered their counterpart’s careers which made them so similar.

Changing The Landscape Of Mainstream Professional Wrestling In Different Ways

What is most important to know in this comparison is that both of these rivalries helped change the landscape of mainstream professional wrestling forever. While it may be in different ways, what makes Bayley vs. Banks so much like The Rock vs. Stone Cold is that they did their best to bring change. Here’s how each rivalry did that.

The Rock vs. Stone Cold Became The Rivalry To End A War 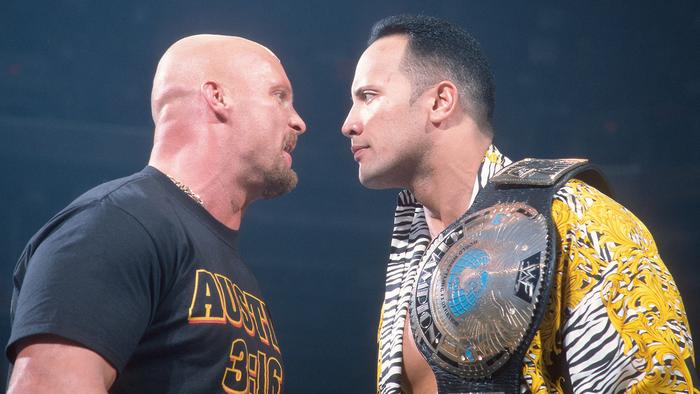 When the Monday Night Wars was riding high and more popular than ever, WWE was in need of something to combat the nWo. A tall task considering they needed to make a star while their former stars in Hulk Hogan, Kevin Nash, and Scott Hall were taking the viewership away from them. That’s where Stone Cold and The Rock step in more than ever. Their parallel meteoric rises were untouchable. And when they built to their rivalry, it was the perfect fit. Both on top of their game, it was clear that they were going to be wrestling’s most popular stars because of what they did in the ring but maybe even more out of it with their undeniable abilities with a microphone in their hand. What they did together was change the industry, save WWE, and end a war that almost put the biggest wrestling company out of business.

Bayley vs. Sasha Banks Opened Eyes To What Women’s Wrestling Could Be 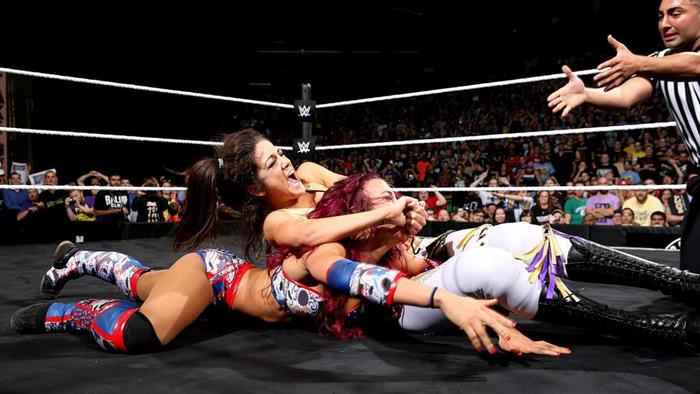 When #GiveDivasAChance trended on Twitter, a plan was set in motion to feature the women wrestlers of WWE on TV more moving forward rather than the two-minute matches they became accustomed to for years at this point. As that plan went into motion, NXT was far ahead. Far ahead in the sense that they were delivering and getting the time to shine. Charlotte Flair, Becky Lynch, and Sasha Banks were brought up to the main roster to further that plan. But what was happening in NXT remained the center of what was happening in WWE for women’s wrestling. Sasha Banks, as the NXT Women’s Champion, was set to face Bayley. The same woman that she doubted and told she was not good enough to beat her. This all led to NXT TakeOver: Brooklyn and it was there that they changed everything. The women’s division was having great matches, but this was the match. Brooklyn witnessed history between these women and they have said they were afraid of going out there because they didn’t rehearse the match. Bayley and Banks have said they didn’t want to be denied of what they had planned and clearly, their mindset turned into magic, pushing that change in WWE forward more than ever. They opened the eyes of WWE fans to what women’s wrestling could and should be. They powered the evolution that still happens today.

Building Off Of Each Other To Be Better

Don’t simply take it from us that these two rivalries are alike. On the Broken Skull Sessions show on the WWE Network, Steve Austin himself compared the rivalry that Bayley and Banks had to the one he had with The Rock. He made it clear that it was that rivalry that made him better as a performer and believed Bayley and Banks did that for each other as well.

“I always felt like if I was in there with The Rock. For some reason, we brought out the best in each other and it wasn’t about a shoot, wasn’t about anything. It was just that chemistry, that magical bond. You can have chemistry with a lot of people but sometimes you have that special chemistry and that is seemingly what you guys have,” Austin said to Bayley regarding her and Banks.

What both these rivalries have given to the world of pro wrestling is excellent storytelling and historic matches that dramatically changed the industry for the better. Building on one another is something that we have seen in rivalries throughout pro wrestling, but being able to make history is what only the most special rivalries can do. 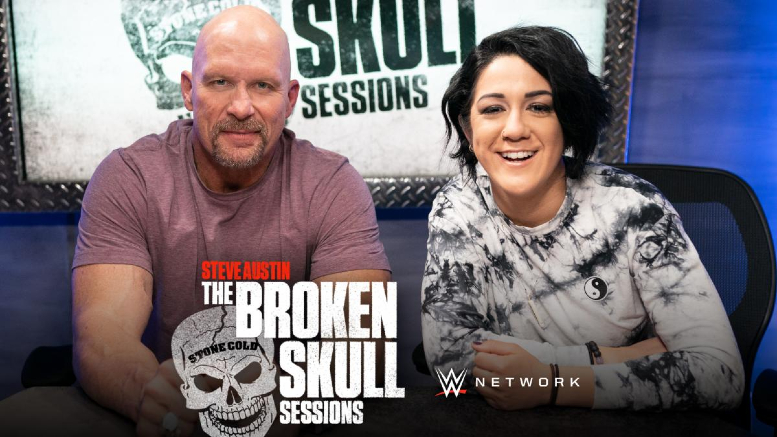 When you look at The Rock vs. Stone Cold from WrestleMania 15, 17, or even 19, you feel the importance, how special it is, and why these two were destined to do this with each other. Both Rock and Austin had great matches in their career with other opponents, but it was their matches together that felt the best. At NXT TakeOver: Brooklyn and Hell in Cell 2020, Bayley and Sasha show that chemistry that only they can do together. Banks have had fantastic matches with Charlotte, Becky Lynch, and more as has Bayley. But when these two go into the ring together, magic happens.

These rivalries built off one another to have their best outings, show the world what they can do, and better themselves for the future. That is what makes a special rivalry like these so great. 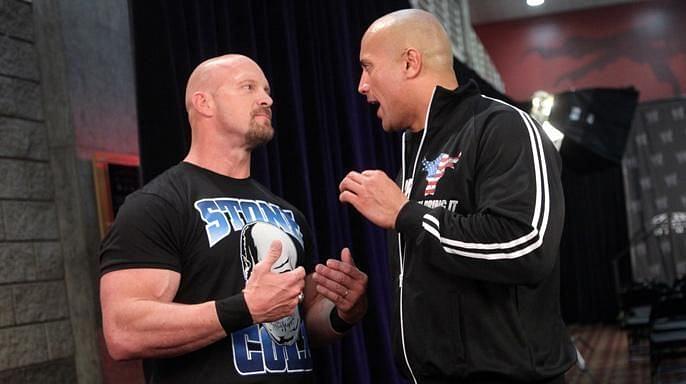 History is difficult to make in WWE considering how much has been achieved all these years later. But both Rock/Austin and Bayley/Sasha have done precisely that, making them the last two great all-time rivalries in WWE history. John Cena and Randy Orton were supposed to be that, but they didn’t make history that changed the game one way or another. The same goes to Cena’s rivalry with CM Punk or even Daniel Bryan’s with the Authority. All these incredible rivalries will be remembered as a part of entertaining television and some of WWE’s best work, but none hold a candle to the impacts and history that Rock and Austin made or what Bayley and Sasha Banks continue to make. 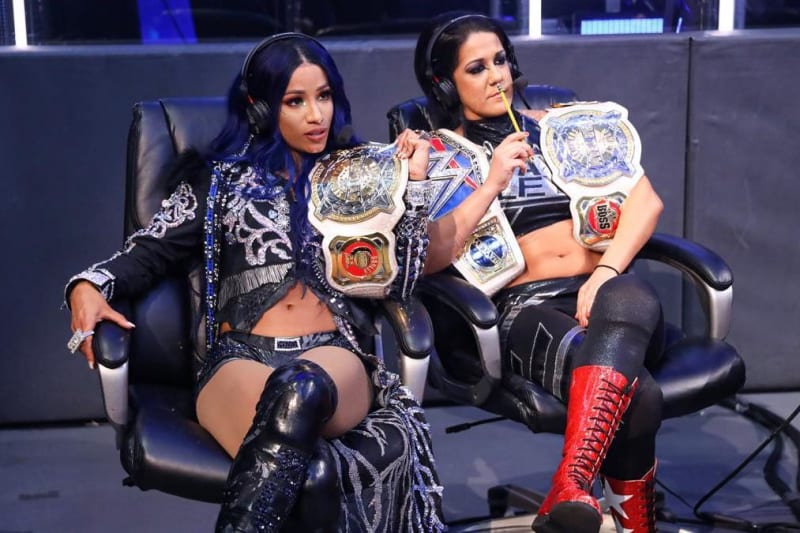 You may disagree, but when you look at the way these individuals fed off each other and what they have been able to accomplish together inside the squared circle, you will understand that they are far more similar than you may have even realized. The promos were iconic in the Rock and Austin feud, while Bayley and Sasha deliver the matches that Rock and Austin dreamed of having.