With 2020 nearly in the rearview, Game Changer Wrestling looks to be gearing up for a promising 2021. To say that this year has posed challenges for the wrestling industry would be an understatement. What does the future hold for GCW and independent wrestling at large? This remains to be seen, but if the following card is any indication, GCW aims to wrap up 2020 with a bang. On New Year’s Eve, the aptly-named GCW Good Riddance will take place, featuring involvement from Hybrid Wrestling as well. Take a look at the following confirmed card and a few potential highlights for the event. 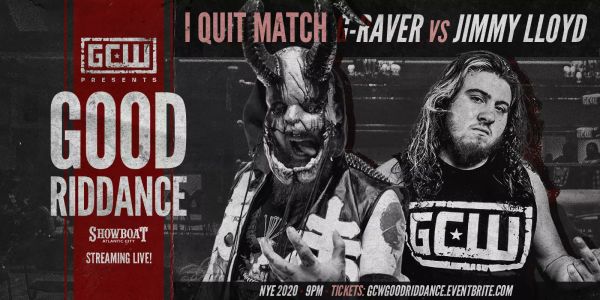 This past November, at the Nick Gage Invitational 5, Jimmy Lloyd took part in the six-man scramble match. Despite his best efforts, the “Different Boy” was unable to win, as Blake Christian had his arm raised by the end. What had GCW fans talking, however, was the follow-up. After the match, G-Raver made his first GCW appearance in roughly a year. What started as a seemingly heartfelt moment, with G-Raver embracing Lloyd, soon turned pear-shaped. G-Raver viciously attacked Lloyd, dousing him with lighter fluid before setting him ablaze. On this night, the 13-year deathmatch wrestling veteran made his intentions known.

This past August, at the GCW/Black Label Pro event 2 Cups Stuffed, G-Raver took part in a Doors, Ladders and Chairs Match. Near the end of the match, G-Raver and Lloyd battled on separate ladders. This resulted in G-Raver being thrown to the surface, smashing through a series of light tubes, causing severe bleeding. G-Raver would go on to make his return in October, for H20 Wrestling‘s The Last Extravaganza Weekend, though his focus remained on Lloyd, blaming him for costing him over a month of in-ring time. There will be no love lost between these rivals as they aim to make the other utter the words, “I Quit.” 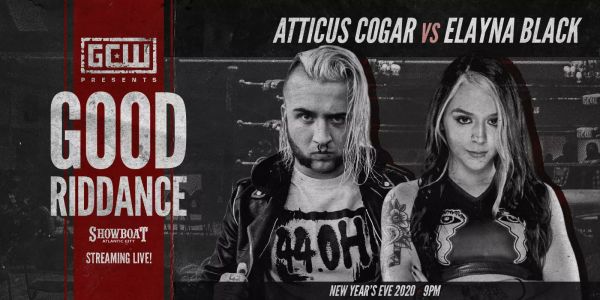 As one of the members of the 44OH, Atticus Cogar isn’t shy about using his group to achieve victory. With that said, Cogar will enter GCW Good Riddance coming off a loss. At Slime Season earlier this month, he was bested by Mance Warner. This shouldn’t detract from the efforts of “Silver Teeth Satan” throughout 2020. In various GCW events this year, he has picked up major victories over Colby Corino, Allie Kat, future 56 Nights opponent EFFY, and others. Simply put, the future is as bright as the young 23-year-old star would like it to be. “Silver Teeth Satan” will meet a unique match at Good Riddance in the form of “The Sorceress of Sin,” Elayna Black.

As of this month, Elayna Black has just reached two years in the wrestling business. Despite her relative inexperience, Black has become one of the up-and-coming stars on the independent scene. Not only has she made appearances throughout various organizations, but she built her name further with a recent AEW DARK match. The last time Black encountered Cogar was in the Clusterf*ck Battle Royal at Joey Janela’s Spring Break 4 this past October. They were also involved in the same scramble match at Freelance Wrestling‘s Send in the Clowns event in February. This match marks the first time Cogar and Black meet in singles competition. Expect this encounter to be nothing short of scrappy. 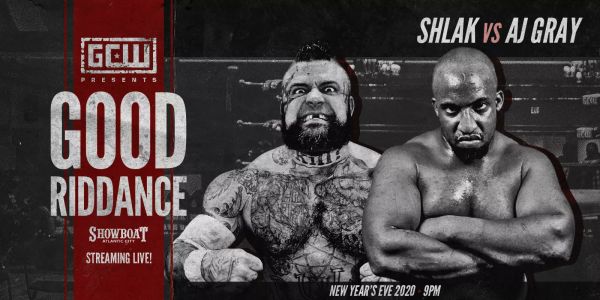 Built like a tank and hitting just as hard, SHLAK is nothing short of dominant. His last appearance for GCW took place at this past October’s The Last Resort, where he bested Atticus Cogar. Since then, SHLAK has been a regular competitor for ICW No Holds Barred, where he has tested his might against the likes of Neil Diamond Cutter and former WWE World Tag Team Champion Meng. SHLAK is not one to turn down a challenge. At GCW Good Riddance, which will mark his first appearance for the organization in over two months, “Public Animal #1” will have his work cut out for him.

AJ Gray will be an interesting opponent for SHLAK at GCW Good Riddance. Keep in mind that they were partners at Homecoming Weekend this past July; along with Alex Colon and Nick Gage, SHLAK and Gray defeated the 44OH in a four-on-five handicap match. Since then, they have yet to cross paths. Gray has become a regular competitor for GCW and made appearances for other organizations. Most recently, “Rich Homie Juice” has picked up a few victories at No Peace Underground based in Florida. Gray will also enter this match as Glory Pro Wrestling‘s current Crown of Glory Champion at over 460 days. In what is sure to be a hard-hitting affair, will it be SHLAK or Gray that emerges victorious? 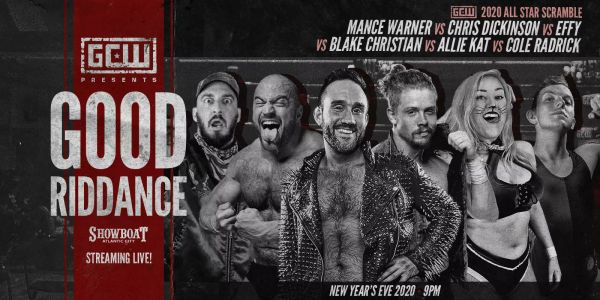 No GCW event is complete without its multi-wrestler scramble match, pitting multiple competitors against one another in nonstop action. GCW Good Riddance aims to put together the most star-studded scramble match yet with six company regulars: Mance Warner, Chris Dickinson, EFFY, Blake Christian, Allie Kat, and Cole Radrick. On the surface, these wrestlers feature incredibly different wrestling styles and philosophies. Despite this, it can’t be denied that these six have achieved individual success in 2020, not just in GCW but across independent wrestling at large.

Case and point, Mance Warner won the Tournament of Survival 5, persevering through grueling matches featuring tried-and-true deathmatch weaponry. Chris Dickinson became a regular United Wrestling Network competitor, proving himself as a force in the UWN World Title scene. EFFY brought his own flair and oftentimes outlandish approach across different companies, becoming one of the most prominent figures in the independent scene. Blake Christian, in addition to being a GCW regular, became a fixture in New Japan Pro Wrestling‘s United States expansion. From the Acid Cup to Slime Season, Allie Kat showed she could be just as hard-hitting as she is fun-loving. Finally, Cole Radrick, at the age of twenty-three, aims to become one of the grittiest, unyielding wrestlers in the independents today. Needless to say, the GCW 2020 All-Star Scramble is aptly named.

GCW Good Riddance will take place at The Carousel Room at The Showboat in Atlantic City, New Jersey, on December 31, 2020.

Tickets for the events are on sale now via Eventbrite. Attendees are expected to wear masks and face coverings. Furthermore, social distancing guidelines will be enforced throughout the event. For those that are unable to attend in person, Good Riddance will air live on FITE.tv; further details can be found below.

Stay tuned to the Last Word on Pro Wrestling for more on this and other stories from around the world of wrestling, as they develop. You can always count on LWOPW to be on top of the major news in the wrestling world, as well as to provide you with analysis, previews, videos, interviews, and editorials on the wrestling world. GCW Good Riddance airs on Thursday at 7:00 PM EST live on FITE.tv.