Fresh off last Saturday’s return episode of Fight Club, Insane Championship Wrestling (ICW) are back with what is sure to be another stellar episode. Aside from the introduction of the company’s first round-robin tournament in the form of the Lionheart League Tournament, a number of new faces have since cropped up in the promotion, while there have also been some developments in each of ICW’s championship divisions.

Block A of the Lionheart League Tournament continues in a battle of the Stevies, as former ICW World Heavyweight Champion, Stevie Boy, collides with former ICW Tag Team Champion, Stevie James. The leader of The Filthy Generation dropped the title to Noam Dar at the 9th Annual Square Go! this past February after a lengthy second reign as the guy to beat in ICW, during which he saw off all challengers. ‘The Pharoah of Filth’ had only returned to action after a year-long absence through injury in July 2019, and came back with a new arsenal on show. It was this arsenal which allowed the former Bucky Boys member to gain two points in the ongoing tournament over Grant McIvor, utilising his previously-injured limb to execute his pouncing knee strike finisher on ‘The Gazelle’. Meanwhile, James lost his first tournament match to the reigning ICW Zero-G Champion, Liam Thomson. A win here for ‘The Outlaw’ would not only give him his first two points in the tournament, but it would also give him a mammoth victory over an ICW legend. 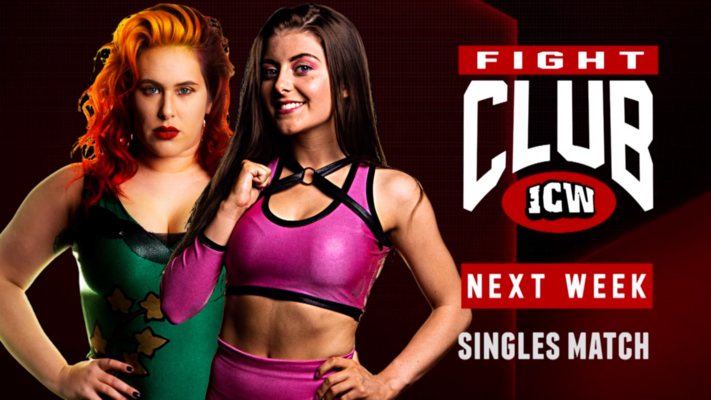 Angel Hayze made her Insane Fight Club debut last summer, and has since become one of the fastest rising stars in ICW’s women’s division. ‘The Young Lioness’ continued her rise to the top of the division as she scored a win over Anastasia last Saturday, after which she was confronted backstage by Molly Spartan. A graduate of the Glasgow Pro Wrestling Asylum (GPWA), Spartan made her official in-ring ICW debut at the company’s last Fight Club before shows were forced to be postponed, losing to Kasey in the semifinals of a four-woman tournament for the vacant ICW Women’s World Championship. Now that she’s back, though, and the status of that title still unknown, perhaps Molly is looking to make a statement for herself at the expense of Angel Hayze. If we’ve learned anything from Hayze in her young career, however, it’s that she’s never one to back down from a challenge, regardless of how big the hurdle may be.

Still buzzing after making my debut for ICW recently!

Although not officially confirmed by ICW themselves, Logan Smith revealed on his Twitter that he’s set for his ICW debut on tonight’s show as he takes on a returning face in the form of Theo Doros. With five years of experience under his belt, Smith follows in the footsteps of Ian Skinner, Alex Parker, Angel Hayze, and others who all trained at the same school in Glasgow. While Parker only just debuted a week ago, Skinner has earned a spot in the Lionheart League Tournament after making two appearances late last year, both of which were losses – once on a GONZO show to The Power Forward (Grant McIvor, Scott McManus, and Craig Anthony) while teaming with Darren Vice and Dean Ford, and the second on a special France 2000 edition of Fight Club to Luca de Pazzi. He’s more than deserving of such an opportunity, though, as is his opponent for the evening. Theo Doros made a sole appearance for ICW in the summer of 2018, as he unsuccessfully challenged for the ICW Tag Team Championships against The P.O.D (Rampage Brown and Ashton Smith). Elsewhere, he’s the reigning Heavyweight Champion in Reckless Intent Wrestling (RI), a title he lifted to end the over year-long run of Dickie Divers last November. ‘The Superior Cypriot’ could easily slot well into a full-time ICW slot, and with blocks C and D still to reveal for the ongoing tournament, perhaps Doros could be one of the eight combatants.

The Nine9 Step Up

At the 9th Annual Square Go!, Lou King Sharp and Krieger, who also come from the same school previously mentioned as Parker, Skinner, and Hayze, proved their doubters wrong as they dethroned The Purge (Stevie James and Krobar) of the ICW Tag Team Championships in a wild Glasgow Street Fight. With shows stopping before they could get a chance to officially enjoy their reign, ‘The Blood Tourist’ and ‘Scudmaster Sexy’ seem to have a target on their backs – The Nine9 (Dickie Divers and Jack Morris). It was Morris who scored a singles win over Sharp last week, most likely putting he and Divers in position for a title shot further down the line. If you recall, it was The Nine9 who were defeated by the current champions at last year’s Fear & Loathing, a match that put The Fite Network in line for their title opportunity against The Purge. Wrestling’s always nicer when it ties together.

Stay tuned to the Last Word on Pro Wrestling for more on this and other stories from around the world of wrestling, as they develop. You can always count on LWOPW to be on top of the major news in the wrestling world, as well as to provide you with analysis, previews, videos, interviews, and editorials on the wrestling world. You can catch all of the ICW action using ICW On Demand and the WWE Network.