Just one week removed from a hellacious Women’s Championship Falls Count Anywhere Match, tonight’s episode of NXT UK will see the crowning of the inaugural NXT UK Heritage Cup Champion will, as the finals of the eight-man single-elimination tournament take place, alongside a defence of the ‘real’ NXT Crusierweight Championship.

The #NXTUK Heritage Cup comes down to two of the very best! pic.twitter.com/QlfaE2EgTG

They’ve both come through hurdles to reach this point, and now, Trent Seven will battle A-Kid to determine who will be the first to say they held the NXT UK Heritage Cup Championship. Seven bested wildcard entry Kenny Williams en-route to the semifinals, where he saw off quite the challenge from the imposing Dave Mastiff. Meanwhile, A-Kid first defeated Flash Morgan Webster in a tournament-stealing contest, before going on to defeat Noam Dar to earn the right to enter the finals of the tournament. As an NXT UK original, having been one of 16 men who competed in the first United Kingdom Championship Tournament back in 2017, it’s quite astonishing that Seven is yet to taste NXT UK gold. He’s a former NXT Tag Team Champion, sure, but he’s never quite been able to lift gold on his home turf. As for A-Kid, he’s been rising through the brand at a seemingly never-ending rate. Having only signed with NXT UK last year, the Spanish sensation has become a perennial fan favourite amongst fans. A win over someone the calibre of Trent Seven would only boost his stock, particularly when there’s championship implications. 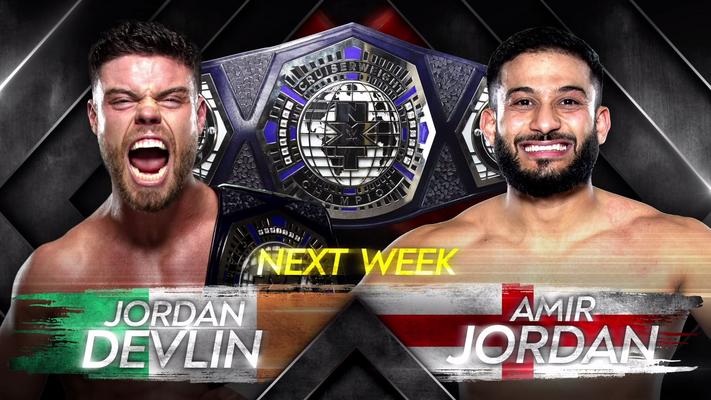 The NXT UK Heritage Cup Championship isn’t the only title up for grabs this week, as Jordan Devlin defends the ‘real’ NXT Cruiserweight Championship against Amir Jordan. Since returning to NXT UK, Devlin has proclaimed himself the true Cruiserweight Champion, a statement in response to Santos Escobar becoming the interim champion over on main NXT in his absence. ‘The Irish Ace’, however, didn’t take too kindly to somebody else stepping in his place when he never dropped the strap in the first place, which hasn’t made him the most beloved member of the NXT UK locker room. Amir Jordan and Kenny Williams, for example, haven’t been willing to sit back and listen to Irishman’s claims, confronting the champion backstage last week. In light of this, general manager Johnny Saint has allowed ‘The Bhangra Badboy’ the opportunity to dethrone the NXT UK original. While the tournament finals will no doubt be sensational, don’t look past Devlin vs. Jordan, as it has all the potential to steal the entire show.

On last week’s NXT UK, we saw the possible forming of two new alliances. Most notably, Jinny technically aided Kay Lee Ray in retaining the NXT UK Women’s Championship over Piper Niven in the evening’s main event. While ‘The Fashionista’ did actually knock both champion and challenger off the crates, it wound up being enough to keep ‘The Vixen of Violence’ down long enough for KLR to capitalise. A relationship between the pair doesn’t necessarily make sense on paper, but think of it this way – Jinny could either use this as a way of saying she earned a title shot by helping Kay Lee keep her title a bit longer, or she could forge a friendship with the champion for the time being, only to turn on her in true wrestling fashion.

Secondly, in quite a shocking turn, it appears NXT UK are actually doing something with both Jack Starz and Levi Muir, aside from using them as their enhancement talents whenever someone else needs putting over. Starz came to Muir’s aid after he had been decimated by Saxon Huxley, a man who can bust out quite the lariat, by the way. What this friendship means going forward will need to be seen to be believed, as Starz has never been anything other than a jobber for NXT UK. Muir, meanwhile, only signed earlier this year. Granted, the doubles division could use some lower-ranked teams, so they’d slot in perfectly, but that’s not to say they won’t ever win the NXT UK Tag Team Championships. Stranger things have happened, after all.