Indie Watch is our regular series that looks at all of the amazing talents working the independent circuits around the world. Some are veterans revitalizing their careers, some are indie prospects hitting their peaks, while others are names to be on the watch for! This edition looks at one of North America’s fastest rising and prominent indies women’s performer, Elayna Black.

Back in March of this year, we published an article titled The Indies: Women to Watch Out For in 2020.  One of the women to feature was Elayna Black.  At just 19 years of age, Elayna Black has impressed enough important people in professional wrestling to make it to AEW Dark – where she will be working once more tonight (11/03).  Therefore, join us as we run through the career of the “Sorceress of Sin” – so you can join us in our excitement for her debut tonight.

Elayna Black and the Sorcery of a Future Star

Elayna Black is not yet a household name, but she sure could be.  Possessing both the talent and the arsenal of deadly moves, Black is on the rise.  Just a few short weeks ago, still just twenty years of age, the “Sorceress of Sin” made her All Elite Wrestling debut in a match on AEW Dark.  Though she lost to Red Velvet, you can bet Black did enough to impress.  So much so, in fact, that she is back once more.  Boasting a solid double under-hook DDT as her finishing move, it is only a matter of time before she becomes an established star and maybe even an AEW regular.

An Excellent Start With More Accolades to Come

Given Elayna Black is (again) just twenty years of age, she doesn’t currently have a lot in the name of accolades.  However, what she does have to her name is a 2019 Zen of Women’s Athletics Tournament Winner’s medal and a #33 ranking in the 2019 MNDIY 50 Singles Wrestlers.  In short, Black is going places.  If she keeps picking up awards and keeps ranking high in the numerous pro wrestling rankings out there, she could quite easily force her way into a more permanent position on our screens.  As mentioned in the previous article; Black is bound to draw comparisons to Paige, for her gothic look.  However, it has to be stressed Elayna is a unique performer in her own right; a solid worker both in the ring and on the microphone.  With the added bonus of her charisma, she will keep impressing.

This Week on AEW Dark 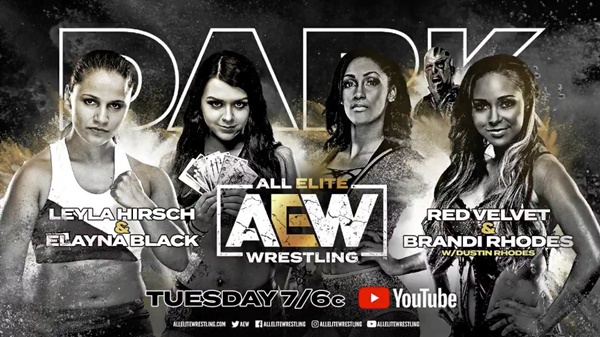 This week on AEW Dark, Elayna Black teams with Leyla Hirsch – another performer mentioned in the March article.  They unite to take on the combined team of Red Velvet and Brandi Rhodes, with Dustin Rhodes in their corner.  Given Brandi’s standing in the world of pro-wrestling as a whole – as one half of a major “Power Couple” – this is a big moment for the three other women sharing the ring.  Dustin’s added presence also carries weight.  However, it is the three other women in the match who will stand out and, quite possibly, this leads to an eventual debut on AEW Dynamite, where the women’s division could do with a serious injection of talent.  It is time for the Sinner to become a Winner.  Win or lose this week, Black will be a winner and show the world what she is capable of.