From the 1970s to the 80s, arcades were at their most popular. It wouldn’t be uncommon for a child to step into an arcade, surrounded by the sights of flashing lights, the sounds of various video games, and even the smells of snacks being prepared in the food court. Arcades were dominated by games ranging from “Pac-Man” to “Mortal Kombat” to “Dance Dance Revolution.” While they exist in certain forms today, there was a period of time when their popularity was beyond compare. Arcades featured the most cutting-edge titles and, as one may imagine, these included wrestling video games.

Before we get deep into the more recognizable arcade wrestling video games, it’s important to understand what made arcades so special. What brought people with varying interests and backgrounds together to partake? It’s also important to look at why, exactly, arcades diminished over time until they became nothing short of a niche interest. The following information will help provide context on the importance of these bastions of gaming.

The Rise and Fall of Arcades

Though arcades saw their biggest spike in popularity during the 1970s, the concept dates all the way back to the early 1900s. For those that don’t know, this was when penny arcades started to take shape. These machines were designed to perform various tasks, such as grant users’ fortunes and “love test” curious couples. Such uses were simple compared to contemporary video games, but as time went on, the concept of arcade machines and cabinets became more sophisticated. From this point, a phenomenon was created.

One of the reasons arcades became so popular was because they could provide gaming experiences one couldn’t find at home. Case and point, the arcade version of Pac-Man was bright, colorful, and featured, for its time, complex audio. Around the same time, gamers only had access to the inferior version of Pac-Man on the Atari 2600. Try as it might have, the latter simply couldn’t hold a candle to what arcades provided. It would take several years for home consoles to provide comparative experiences.

Arcades were also successful at fostering social interaction. Picture this: you’re playing a beat-em-up game at an arcade during the 90s. As you’re progressing, another player jumps in. You look to your side and you see that another person just joined you in your adventure. There was nothing quite like fighting to the death in “Street Fighter” or pushing through Springfield in “The Simpsons” with a total stranger. Arcades fostered a sense of community, as short-term as it might have been, which made playing games that much more enjoyable.

Without question, arcades were popular, but their importance diminished over time. This isn’t to say that they are completely extinct, but they aren’t nearly as prevalent as they were in decades past. One of the reasons for this is the continued improvement of home consoles. As the power of these consoles grew, the reasons to frequent arcades lessened. Why would someone travel to a mall or park to go to an arcade, pay several dollars in quarters, when they could receive similar or even better experiences at home?

It’s also worth noting that arcade machines aren’t cheap. When they couldn’t pay for themselves via user interaction, it made less sense to maintain them. Speaking of which, depending on the age of a cabinet, maintenance can be next to impossible. If one part breaks, it can be a challenge to find a replacement, if one even still exists. As stated earlier, arcades have since become more of a niche interest. Nonetheless, their importance to gaming can’t be ignored. This is true when it comes to wrestling video games, too. In terms of these titles, there are two memorable examples worth covering.

When it comes to wrestling video games during the arcade days, this is perhaps the most obvious. This past July, when I discussed wrestling games on the Super Nintendo and Sega Genesis, this was one of the stand-outs. Its realistic art style in tandem with creative offense made it a memorable, if not difficult, wrestling video game. The true arcade experience stays true to form, so for those looking for a more genuine version of this mid-90s classic, you can’t get much closer than this.

Admittedly, “WWF WrestleMania: The Arcade Game” doesn’t feature the strongest roster. With only eight characters, players had slim pickings to choose from. However, the stars they selected were popular during their time, including Bret Hart, The Undertaker, Razor Ramon, and Shawn Michaels. Furthermore, the game featured two single-player modes: Intercontinental Championship and WWF Championship. These matches pit players in handicap matches and it was in the latter where their skills were truly tested.

“WWF WrestleMania: The Arcade Game” was ported to multiple consoles following its initial release. In addition to the SNES and Genesis, versions of the game can be found on Sega Saturn, 32X, Sony PlayStation, and even the PC. Regardless of the version you choose, it’s important to know what you’re getting into. This is an older arcade-style game that packs a surprising amount of challenge. It may not be for everyone, but even for historical purposes, it’s worth checking out. 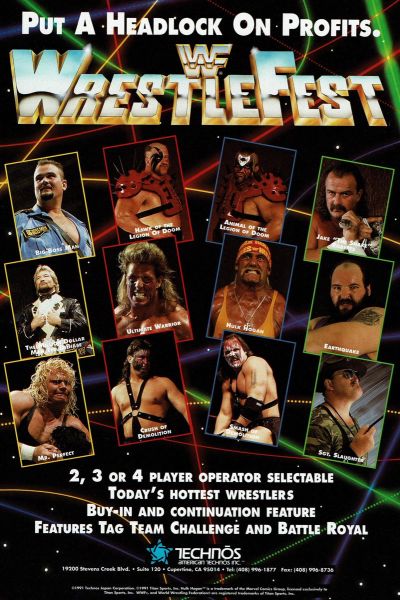 “WWF WrestleMania: The Arcade Game” became available on a multitude of platforms. With that said, what about wrestling arcade games that never left their roots? This is one of the reasons why many titles, wrestling-related and otherwise, have been lost to time. Without an understanding of modern-day emulation, many games simply can’t be experienced anymore. However, for those that have the technical know-how, or access in general, “WWF WrestleFest” from 1991, developed by Technos and THQ, is worth experiencing.

“WWF WrestleFest” was a sequel to “WWF Superstars,” but it was the former that became the more beloved title in hindsight. Not only did it include a total of 10 wrestlers, from Hulk Hogan to Mr. Perfect to Jake “The Snake” Roberts, but it featured genuine audio voice samples as well. This made the matches feel that much greater. Speaking of matches, the gameplay was simple but effective. Players would have to use a combination of grapples and strikes to take the advantage. These would be put into the test in other modes, including the tournament-style Saturday Night’s Main Event.

Simply, “WWF WrestleFest” looked and played the part. Its colorful, cartoony presentation complemented the image of the World Wrestling Federation at the time. The gameplay was simple enough for anyone to pick up, though it took time to truly master. Over two decades later, in 2012, THQ released a modern sequel for iOS in the form of “WWE WrestleFest.” While it attempted to capture the magic of the original, it simply wasn’t up for the task. “WWF WrestleFest” is the arcade wrestling video game worth your time.

When it comes to wrestling video games during the arcade days, these are the two titles that are not only memorable but worth checking out. Whether you are familiar with these titles or are trying them for the first time, their importance can’t be ignored. They contributed to the success of arcades in their own ways. Next time, in our continued revisiting of wrestling video games, we will jump into the seventh generation of video games with the Nintendo Wii.

Check out past entries from the “Revisiting Wrestling Video Games” series!