AEW continues to put together strong cards for DARK and this week is no exception. Returning from injury, Austin Gunn will be back in action alongside dad Billy Gunn, as the Gunn Club take on the indie duo of Serpentico and Aaron Solow. Jack Evans will be in action for the first time since March against QT Marshall, the Butcher and Blade will take on Private Party, Abadon will face KiLynn King, Scorpio Sky and Will Hobbs will do battle, the Initiative will once again try for their first win against Joey Janela and Sonny Kiss, and Brian Pillman Jr. will team up with Griff Garrison to face FTR.

It’s a packed night of action as this week’s seven match card features a ton of returning names, both from the indies and the AEW roster, all ready to put in another set of impressive performances. Here’s a rundown of the card.

The Gunn Club vs Aaron Solow and Serpentico 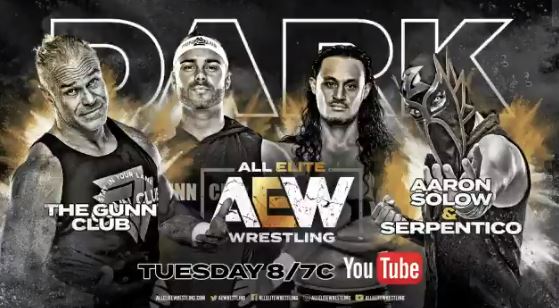 Set to return from an injury that has had him sidelined for much of the year, the 25-year Austin Gunn will be back in action as the Gunn Club is set for their third match of 2020. Joined by his father, the legendary WWE Hall of Famer, Billy Gunn, the Gunn Club has made two appearances this year and are undefeated in tag team action. They will be favored to win again on Tuesday, which will be the duo’s first match as a team since January.

The Gunns will face a tough team however as AEW DARK staple, Serpentico, teams up with recent rising star, Aaron Solow. Both Solow and Serpentico have found success in the independent scene and within AEW. While their win-loss records don’t exactly show it, both Solow and Serpentico have put in top-level performances when they’ve appeared on DARK. Tuesday will mark Solow’s third week in a row on DARK as well as Serpentico’s 13th overall, which is more than any other wrestler this year. 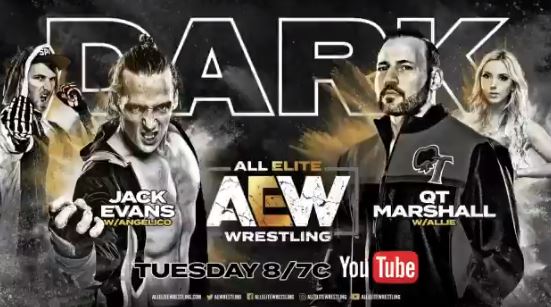 For the past several weeks, Jack Evans and tag team partner Angelico, have been appearing in vignettes on Being the Elite, suggesting the team is close to a return. Having last wrestled on DARK in March, defeating Brandon Cutler and Michael Nakazawa, The Hybrid2 has been out of action for the last few months. But now, the team is back and on Tuesday, the 38-year-old Jack Evans will wrestle his first singles match for AEW in 2020, and just his third ever such match in his AEW career.

Also returning after a brief absence, the 35-year-old QT Marshall is set to make his DARK return for the first time since May and his AEW return for the first time since June. 3-1 in singles matches on DARK this year, Marshall has had a front row seat to watch many of his Nightmare Factory students appear on the program and make the most of the opportunity. But now, it will be the teacher’s turn to get back in the ring and work off the rust.

Butcher and the Blade vs Private Party 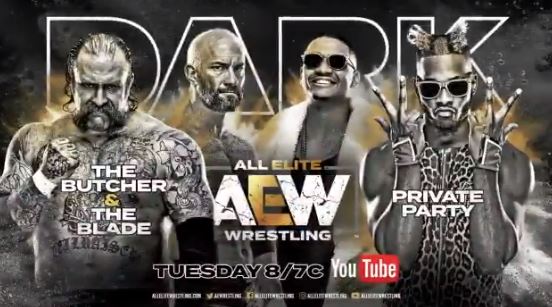 A tag team since 2017, Butcher and the Blade have wrestled 15 matches in AEW this year, which is more than most. Continuing to rise up the ranks of the tag team division, the duo of Pepper Parks and Andy Williams are 5-0 on DARK this year. While the team did just come away with a loss in their last match, a falls count anywhere affair against the Young Bucks, Parks and Williams have found success overall and are certainly a threat every time they step in a ring.

Somewhat their polar opposites, Private Party bring the high-flying offense compared to the brawling and ground-based style of Butcher and the Blade. But as they say, opposites attract and in wrestling, sometimes it is opposite styles that lead to the best matches. Surprisingly, this is actually the first time in AEW that these two teams will square up. A unit since 2015, the duo of Marq Quen and Isiah Kassidy have been one of AEW’s exciting young tag teams. They’ve enjoyed a great year as well, recently challenging for the tag team titles at Fyter Fest and not losing their first match on DARK until last week’s tag team triple threat. 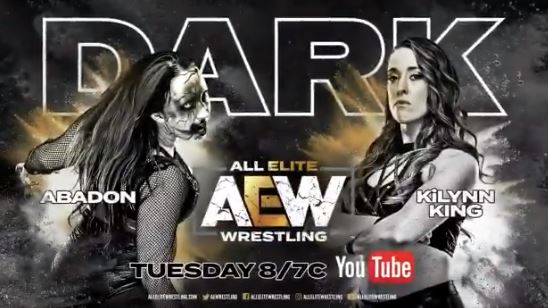 The latest woman to sign on the dotted line with AEW, Abadon has been a one-woman wrecking crew since her Dynamite debut a few months ago. Abadon’s AEW career actually began on DARK in March, but then, she was wrestling as enhancement talent. Now, she’s on the other side of things and as she’s shown in her appearances on both DARK and Dynamite thus far, she’s definitely someone AEW will look to push sooner rather than later. She’s still green but with a unique look and talent to boot, Abadon certainly has a bright future ahead of her.

Her opponent will be a name familiar to regular DARK viewers as the Team 3D Academy trainee, KiLynn King, is returning to the program for the seventh time, which is more than any other indie woman who has been featured. Much like Abadon, King is relatively new to wrestling with a little under three full years experience to her name. King made her AEW debut in May and has been a regular on DARK ever since, wrestling both in singles and tag team action. She’s an exciting prospect to watch and it will be intriguing to see her in action against Abadon.

Scorpio Sky vs Will Hobbs 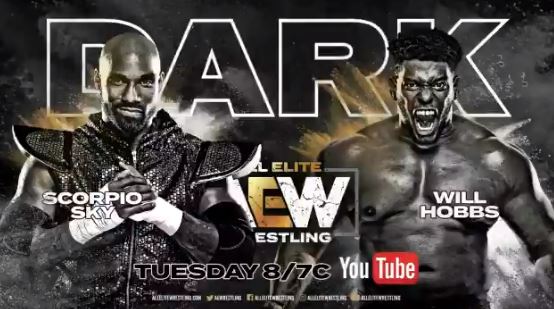 No AEW wrestler this year has made more appearances on DARK than Scorpio Sky, who is being built up for a main roster singles run now that he’s been distanced somewhat from SCU. Sky has wrestled 20 matches in AEW this year, which is more than most, with eight such matches being on DARK. In that time, he’s faced some of the top names to appear on the program including Robert Anthony, Serpentico, Lee Johnson, and Aaron Solow, in his debut. Sky has had the chance to have full-length matches each and every week and he’s looked great doing so.

A fellow native of the California indie scene, Will Hobbs has been enjoying a break out year outside of his home state, thanks to his AEW appearances. Set to make his fifth appearance this week, Hobbs has already made a name for himself within the promotion garnering a lot of buzz thanks to his tag team matches in particular, against the Dark Order. Hobbs has also wrestled Ricky Starks and Orange Cassidy in singles action, but no doubt his biggest match will be this week as he takes on the surging Sky.

The Initiative vs Sonny Kiss and Joey Janela 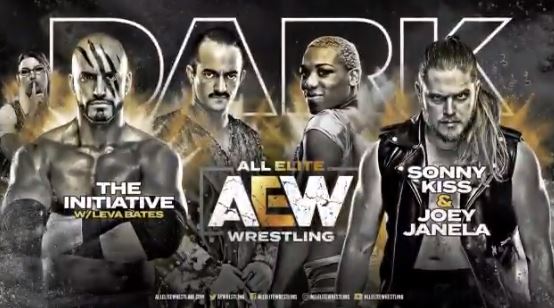 If wins were vowels, Brandon Cutler and Peter Avalon would be told that “there are no more vowels on the board.” These two continue to be an entertaining duo, especially on BTE and DARK, where they have gone from hating each other and debating who is the biggest loser in the company, to joining up as a team that just last week received a name. That means they are here to stay, win or lose, and with these two, it’s going to be lose.

From AEW’s losingest duo to one of its winningest of late, Sonny Kiss and Joey Janela are another somewhat thrown together tag team. But unlike the Initiative, Kiss and Janela have found success and fan support as the team has done nothing but win in their five DARK appearances thus far. Kiss and Janela have been exciting to watch and they make a great addition to AEW’s tag division, which is already stacked to the brim with talent. They’ll most likely keep their record intact as Kiss takes on Cutler, his own former tag team partner, following what has been months of the two going in totally opposite directions. 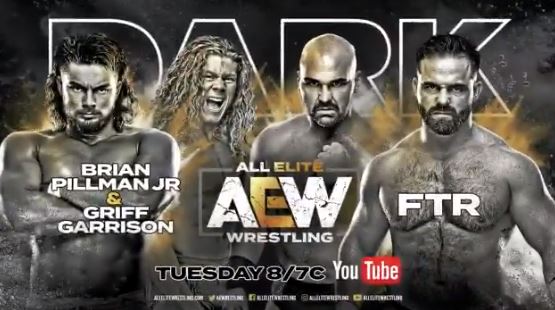 Move over Hollywood Blondes as there is a new duo in town and their names are Brian Pillman Jr. and Griff Garrison. Affectionately being referred to as the New Hollywood Blondes, an omage to the popular tag team that featured Pillman’s father and Stunning Steve Austin pre his stone cold days, Pillman Jr. and Garrison are making their debut as a team this week. With the best hair in AEW, both Pillman and Garrison have also shown to have some of the best matches thus far. Garrison has become a running gag on BTE and Pillman of course brings with him perhaps the biggest star power of any indie wrestler to appear on DARK. It will no doubt be exciting to see these two team together in what marks the first tag team action on DARK for both wrestlers.

Making their DARK debut just last week, FTR has been as advertised in their short time in AEW. Finding a natural connection with Hangman Page, one that perhaps suggests FTR will be headed towards a tag title match sooner rather than later, the duo of Dax Harwood and Cash Wheeler have brought their smash-mouth, old school style to Tuesday and Wednesday nights. A team since 2014, FTR made their debuts outside of WWE, on Dynamite in June, and have lost just one match since. However, that was an eight-man tag. In traditional tag team matches, FTR are an undefeated 4-0 with wins over the Lucha Brothers, SCU, the Initiative, and Butcher and the Blade.