When discussing the greatest women’s wrestlers in Japan today, room in the discussion must be made for Arisa Nakajima. Having started her career at a young age, the former SEAdLINNNG Beyond the Sea Champion built an incredible reputation. In fact, depending on who’s asked, Nakajima may just be the very best wrestler in the joshi puroresu scene today. How did she begin to build a path that would lead to such greatness?

As a child, Arisa Nakajima seldom followed wrestling. It wasn’t until she was older that, upon revisiting wrestling, she was influenced to pursue it. With the support of her parents, she began her training at the age of sixteen. She learned at the now-defunct AtoZ promotion, where she was taught by three-time Japanese Women Pro-Wrestling Project Tag Team Champion Sachie Abe. Nakajima made her debut for AtoZ in December of 2005. She faced fellow newcomer Mika Mizunama, who would retire only a few years later, in a winning effort. They would go on to wrestle each other multiple times in the future.

Following the closure of AtoZ in early 2006, Nakajima became a freelance wrestler. It wasn’t until April of that year that she debuted for JWP, her first “home promotion” of sorts. Early into her JWP run, she worked with the likes of Kaori Yoneyama and Command Bolshoi, the latter of whom became especially helpful during Nakajima’s formative years in wrestling. Nakajima appeared for other promotions, such as New All Japan Women’s Pro Wrestling and Ice Ribbon in August. Later that November, Nakajima was involved in a tournament to crown a new JWP Junior Champion. Besting Hanako Kobayashi in the first round, Hiroyo Matsumoto in the semifinals, and Aoi Kizuki in the finals, Nakajima won the JWP Junior Championship, marking her first-ever title victory.

Nakajima remained JWP Junior Champion heading into 2007. Later that April, she participated in her first tag team tournament, the Discover New Heroine Tag Team Tournament. Alongside then-JWP Openweight Champion Azumi Hyuga, she made it to the finals, falling to Misae Genki and Aya Yuuki. She defended the JWP Junior Championship, but in May, she added another title to her collection when she won JD Star Women’s Pro Wrestling‘s Princess of Pro Wrestling Championship. The two titles would be defended as one the following August when Nakajima triumphed over Kizuki. Nakajima reigned as champion until November, when she lost to Tyrannosaurus Okuda at a Sendai Girls event during an interpromotional program. Nonetheless, it was in 2007 that Nakajima was coming into her own. 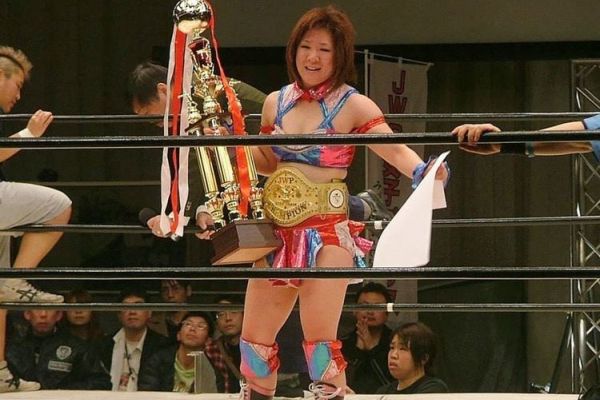 In addition to competing in a number one contender tournament for the JWP Openweight Championship in February of 2008, Nakajima continued to appear for other promotions. Such names included Ice Ribbon, as mentioned earlier, and Pro Wrestling WAVE. It wasn’t until June that Nakajima received retribution for her major loss the year prior. During JWP’s Osaka Pure Fire event, she bested Tyrannosaurus Okuda for the JWP Junior and Princess of Pro Wrestling Championships. She successfully held the titles until December, when she dropped them to Matsumoto at an IBUKI event.

The Departure and Return of Arisa Nakajima

Nakajima continued to wrestle consistently until April of 2009, when she parted ways with JWP and pro wrestling entirely. According to her interview on The Joshi Pod, Nakajima desired to live a normal adult life. She was only twenty years old at the time but decided to take a sabbatical from the sport she devoted herself to since 2005. During her break, Nakajima didn’t follow wrestling. The break in question lasted two and a half years until she made a surprise JWP appearance in December of 2011. She announced that she was back and would be making her in-ring return the following year.

Nakajima returned to the ring, after over three years, on April 22, 2012, at JWP’s 20th Anniversary show. She teamed with former trainer and Hysteric Babe partner Abe in a losing effort against Misaki Ohata and Hanako Nakamori in a losing effort. Nakajima went on to team with Manami Katsu, even challenging Yoneyama and Emi Sakura for tag team gold in May. During that same month, Nakajima debuted for REINA X WORLD, working with Zeuxis and La Malcriada.

It wasn’t until the summer when Nakajima’s luck changed for the better. In August, she teamed with Bolshoi to finally unseat Gatoh Move Pro Wrestling‘s Yoneyama and Sakura for the JWP Tag Team and Daily Sports Tag Team Championships. Nakajima and Bolshoi would also represent their promotion under JWP Seikigun. This clash of factions would lead to one of Nakajima’s biggest matches the following December, when she bested Sakura to win her first JWP Openweight Championship. This violent affair only bolstered Nakajima’s reputation.

2013 started on a rocky note for Nakajima, as she and Bolshoi lost their titles to Tsubasa Kuragaki and Kayoko Haruyama in January. In terms of singles success, Nakajima defended the JWP Openweight Championship in the months that followed. She also took part in the Catch the WAVE Tournament in May. She made it to the finals, where she ultimately lost to Ohata. In July, Nakajima faced her former partner Bolshoi in a match where the JWP Openweight and CMLL-REINA International Championships were on the line. Nakajima won the match, adding another title to her ever-growing resume. Only one month later, Nakajima’s momentum was derailed by Kana, the future Asuka of WWE. Kana won the JWP Openweight Championship, which led to a downward spiral for Nakajima.

Arisa Nakajima Turns to the Dark Side

Following the aforementioned loss to Kana, Nakajima’s cheerful demeanor diminished. She also found herself struggling to pick up victories, which didn’t help her psyche. To compound matters, she suffered a dislocated shoulder in September, which kept her out of action until October. During the latter month, at a World Woman Pro-Wrestling Diana match, she turned on partner Kyoko Inoue. Afterward, Nakajima aligned herself with Mask de Sun, Yumiko Hotta, and the Bousou-gun stable as a whole. This turn would pay off nicely, as Nakajima would face Kana in a winning effort, reclaiming the JWP Openweight Championship. She would also go on to face then-World of Stardom Champion Io Shirai in a thirty-minute draw. Both bouts were incredibly well-received by fans and critics. 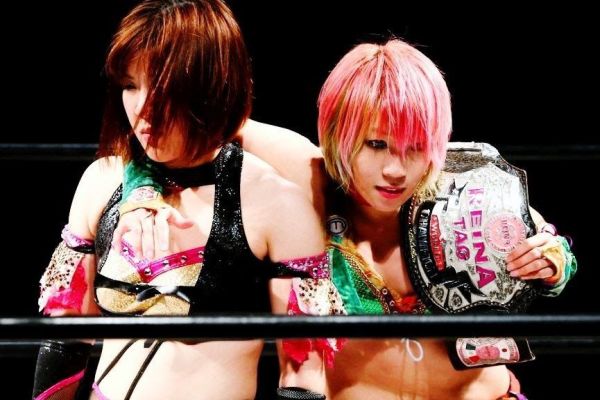 Despite their issues, Nakajima and Kana entered JWP’s Tag League the Best Tournament in January of 2014. Said issues aside, they performed well, though they failed to make it to the finals. Throughout the rest of the year, Nakajima was a dominant JWP Openweight Champion, defeating the likes of Kyoko Kimura, Leon, and DASH Chisako along the way. The following November, Nakajima and Kana’s strange partnership yielded big returns when they won a tournament to become the new REINA World Tag Team Champions. These two were proof that adversity made strange bedfellows.

The Formation of Best Friends

Though she ended 2014 on a high note, early 2015 presented different challenges for Arisa Nakajima. In February, after only a few short months as REINA World Tag Team Champions, Nakajima and Kana dropped the titles to Syuri and Hikaru Shida. In April, Nakajima was defeated by Kayako Haruyama for the JWP Openweight Championship. By June, however, Nakajima found herself in the tag team scene alongside Tsukasa Fujimoto. They formed the team Best Friends, which was an apt name given their close real-life friendship. Best Friends won the International Ribbon Tag Team Championship from Haruyama and Kizuki in October. By the end of the year, they would claim the JWP Tag Team and Daily Sports Tag Team Championships as well. In short, Best Friends were on a roll. 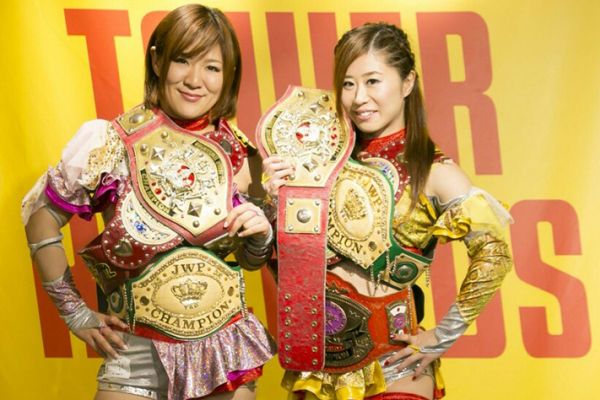 Nakajima remained in Japan throughout the first half of 2016, even claiming the JWP Openweight Championship for the third time in April. In May, she traveled to the United States for the first time when she was invited to compete for SHIMMER Women Athletes. She picked up a few wins over promotion regulars and even competed for the SHIMMER Championship against Madison Eagles. Back in Japan, Nakajima found herself without championships, as she lost her tag team accolades during the summer and fall. She would also lose the JWP Openweight Championship to Kimura in October. Nakajima rebounded the following November in a Street Fight, claiming her record-setting fourth JWP Openweight Championship in the process. Aside from Hyuga, Nakajima shares the record for most reigns with the title. By the end of 2016, she would part ways with JWP.

In January of 2017, Nakajima wrestled her first post-JWP match at a SEAdLINNNG event. She faced the latter promotion’s founder, Nanae Takahashi, in a losing effort. Nonetheless, Nakajima was driven to defeat Takahashi. This led to her joining SEAdLINNNG as a regular. She also shows for other promotions, including Ice Ribbon, where she regularly teamed with Fujimoto. Best Friends proved incredibly successful in Ice Ribbon, picking up victories over the likes of Maika Ozaki and Kyuri.

Nakajima’s freelance endeavors continued into 2018. In the spring, she competed in that year’s Catch the WAVE Tournament, where she won seven points in the Violence Block. Despite this, she failed to move on to the finals. In SEAdLINNNG, she remained focused on defeating Takahashi. Nakajima challenged her for the vacant Beyond the Sea Championship in a tournament, but despite her best efforts, she couldn’t unseat the promoter. Though she struggled, success awaited Nakajima in SEAdLINNNG. By the end of the year, she teamed with Ayame Sasamura to defeat Rina Yamashita and Yoshiko for the Beyond the Sea Tag Team Championship.

Becoming the Beyond the Sea Champion

Arisa Nakajima would remain in the Beyond the Sea Tag Team Championship scene until April of 2019. Despite her success in tag team wrestling, given her solo talent, it was clear she could do much more. In September, Nakajima finally won the Beyond the Sea Championship by defeating Takumi Iroha. Nakajima was a formidable champion, successfully defending it against the likes of Sasamura and Takahashi, the latter of whom she finally bested in an emotional Hair vs. Hair Match.

To say that 2020 shook the wrestling world would be an understatement. When the COVID-19 pandemic hit, it created a shockwave through the athletic world, wrestling included. Nakajima wrestled until March of that year and wouldn’t work a traditional match until the following May. That month, she successfully defended the SEAdLINNNG Beyond the Sea Championship against ASUKA. The following month, despite a valiant effort from the champion, Nakajima dropped the title to Yoshiko. If her talent and drive are indicative, don’t expect this to be the final time Nakajima holds the Beyond the Sea Championship.

What Does the Future Hold?

As stated earlier, the argument can be made that Arisa Nakajima is the best joshi wrestler in the game today. Given her track record, it’s easy to see why. From Kana to Takahashi to ASUKA and beyond, Nakajima has been able to build an incredible reputation for herself. She has been a force to be reckoned with in Japan, but once the situation allows, she may find herself back in the United States to show American fans why said reputation persists. Simply put, she is a talent that can’t be denied.

Check out past Joshi Watches and discover more stars from Japan!