Game Changer Wrestling is back in full swing after making their return to live wrestling last month with The Wrld on GCW 2 (which also marked their Indiana debut), but this weekend they return home to New Jersey with a huge two-night homecoming spectacle on the historic Garden Pier on the Atlantic City boardwalk, with both cards shaping up to showcase some of GCW’s best stars, with a smattering of young stars on the rise, and some pretty wild GCW debuts. Both nights are airing live on FITE.tv, with Part 1 kicking off on Saturday, July 25, at 5pm EST. Each night is $13.99US or you can get a Weekend Pack for only $19.99US. 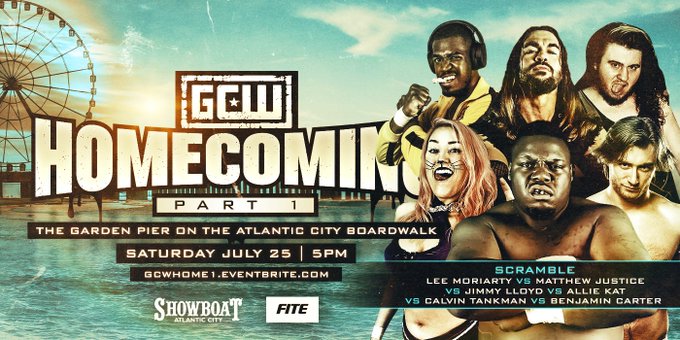 Another great scramble featuring some of GCW’s regular stars and hot new prospects. Lee Moriarty made his GCW debut last month, defeating Tre Lemar in a stunning debut. A 5-year pro, Moriarty has been making waves with Pennsylvania’s RYSE Wrestling, as well as GCW, Absolute Intense Wrestling (AIW), CHIKARA, Bizarro Lucha, Paradigm Pro Wrestling, and many more. Matthew Justice has made a huge name for himself over the past two years after an impressive 14-year career. He’s the reigning AIW Absolute and AIW Intense Champion and continues to reak havoc in the likes of GCW, Beyond Wrestling, ICW No Holds Barred, and more. “The Different Boy” Jimmy Lloyd has gone from being an early GCW project to now being one of the company’s most dependable performers, who can work with any style. Allie Kat was about to take a hiatus from pro wrestling until GCW came along last year, and now she’s not only come into her own as one of the top rising stars in the game but an invaluable member of GCW’s roster. Calvin Tankman has been a mainstay with IWA Mid South since 2016, and a former IWA Mid South Heavyweight Champion. Tankman has been a wrecking crew throughout the US indies, with the likes of GCW, AIW, EMERGE Wrestling, and Indiana’s PPW and Bizarro Lucha, where he’s the current reigning BL Luchaversal Champion and recently signed with Major League Wrestling (MLW). Benjamin Carter, who’s turning heads in the US with the likes of ACTION Wrestling, AAW Pro, Scenic City, SCW Pro, and others is also scheduled. Keep your eyes on Carter, as he’s a future star in the making. 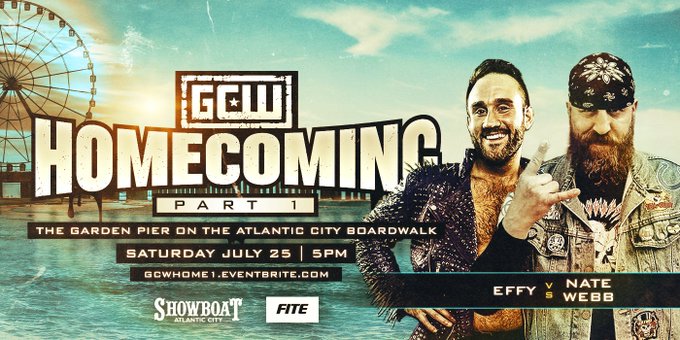 EFFY has only been a part of the GCW family for just over a year, making his debut at Joey Janela’s Spring Break 3 in The Greatest Clusterf**k over WrestleMania Week, before making his singles debut against Orange Cassidy at GCW Lights Out a year ago this week in Nashville. Since then, EFFY has shown that he’s more than a charismatic showman and has gone toe to toe with some of GCW’s toughest competitors in Nick Gage, Chris Dickinson, SHLAK, Mance Warner, and Eddie Kingston. He continues to take on the hardcore veterans on Saturday when he faces “Spyder” Nate Webb, a former 2x IWA Mid-South Junior Heavyweight Champion who has been a force on the hardcore scene 1999. Webb has recently become an internet cooking show star on IWTV with “Nate Webb’s Dirtbag Kitchen”, but don’t let his transition to the kitchen as a sign he’s slowing down – this man can still fight with the best of them. 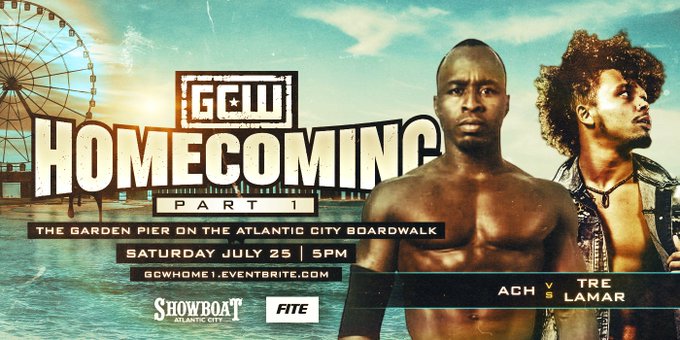 The first huge GCW debut on Saturday comes in the form of former NXT Superstar and indie megastar ACH. ACH went from a rising star in the Texas indies at the end of the 2000s into one of Ring of Honor‘s brightest new stars when he joined ROH in 2012, where he competed until 2016. He continued to become of the top stars in the US indies, competing for the likes of Pro Wrestling Guerrilla (PWG), AAW Pro, AIW, and more, as well as heading to Japan to compete for both New Japan Pro Wrestling and Pro Wrestling NOAH. He even headed to Europe, fighting for Germany’s Westside Xtreme Wrestling (wXw), England’s Revolution Pro (RevPro), and Ireland’s Over the Top (OTT) Wrestling. He briefly worked for Major League Wrestling (MLW) before his short stint in WWE that ended abruptly in late 2019. He returned to the Texas indies and MLW briefly, but this Saturday marks his official debut with GCW, and it’s against one of the bright new stars GCW has been showcasing in Tre Lemar. A trainee of NXT’s Johnny Gargano and Candice Larae, Tre Lamar has exploded in the Midwest, where’s also in the Blood Diamond stable alongside Jake Lander and Kobe Durst and 40 Acres with AJ Gray and PB Smooth. The 22-year old is a regular with AIW, IWA Mid South, Black Label Pro, where he’s a former BLP Tag Team Champion with Lander. He made his GCW debut last month in Indiana. 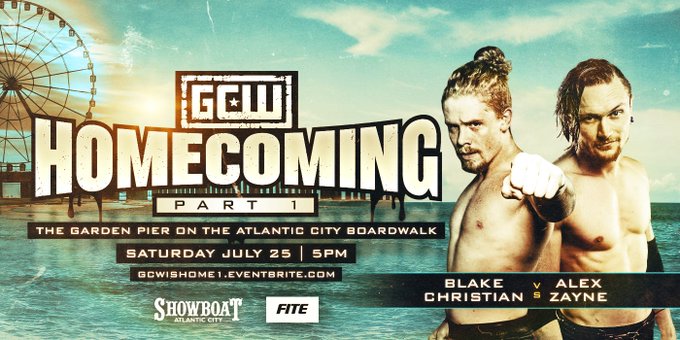 Pro wrestling is full of legendary rivalries, such as Bret Hart vs. Shawn Michaels, Hulk Hogan vs. Andre the Giant, and Sting vs. Ric Flair, but in the US indies over the past year, very few have come close to that of Alex Zayne vs. Blake Christian. Both men made their GCW debuts a year ago in July and since then, both of these innovative high flyers have captured the hearts and imaginations of the indie wrestling community. The two would first lock-up in singles action in August at GCW’s return to the West Coast for Joey Janela’s Escape From LA, which got both of them booked in PWG as part of the non-tournament section of Battles of Los Angeles that September. The two have been seemingly inseparable since then, appearing mostly in multi-man matches, from tag team to Scrambles. Their last singles one-on-one was last September on the second night of Black Label Pro‘s Turbo Graps 16 tournament. The two are 1-1 against each other, so this Saturday they’ll have the rubber match (which was originally slated for a 30-minute Iron Man Match in Synergy Pro last month but had to pull out of due to quarantine). Two of the US indies’ most innovative high-flyers, this match will be a joyride of jaw-dropping GIFs just waiting to go viral. 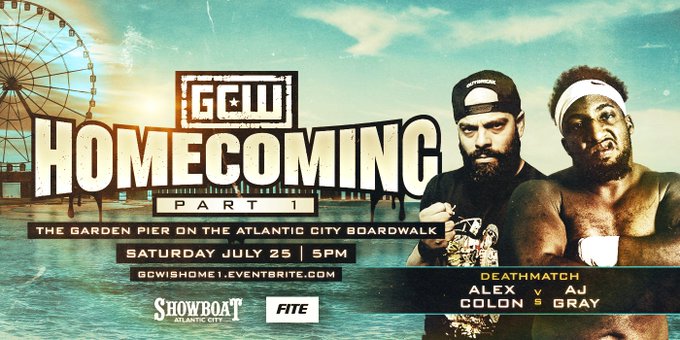 Alex Colon has been one of GCW’s MVPs over the past years, ever since the regular for Rockstar Pro and Combat Zone Wrestling (CZW) made his GCW debut in 2017. A skilled technical wrestler, he’s equally at home in the deathmatch circuit, as a former 2x Hardcore Hustle Organization (H2O) Heavyweight Champion and the winner of last year’s GCW Tournament of Survival and a finalist in last fall’s Nick Gage Invitational. His deathmatch opponent on Saturday is another man that has become an anchor in GCW over the past year in AJ Gray. Gray became the man who ended Nick Gage’s 722-day reign as GCW World Champion last December (before being robbed by Rickey Shane Page) and Gray’s dominance has spread across the board in the US indies, where he’s the reigning Crown of Glory Champion in Glory Pro and continues to work for the likes of Beyond Wrestling, AIW, Black Label Pro, Paradigm Pro, and many others. Gray hits hard but Colon has the deathmatch experience, but either way, this will be a helluva fight. 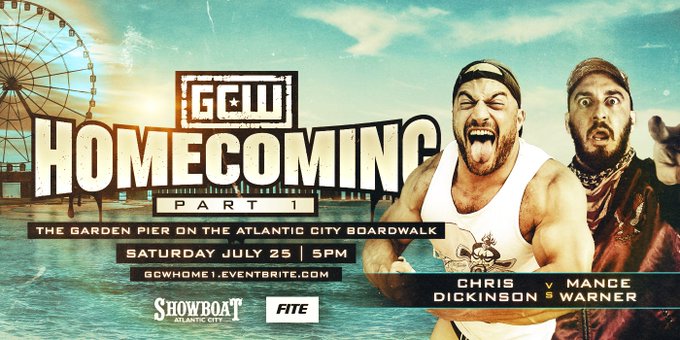 Both of these men are two of the most popular names in the US indies and have been a part of GCW’s backbone for years. Both are incredibly tough and will take on any opponent, and neither are afraid to lose a little blood for the sake of the fight. Surprisingly, this is the first time that both Chris Dickinson and Mance Warner have faced off in a singles match, only competing with each other once before in a four-way match in May of 2019 with Limitless Wrestling. Dickinson was arguably the MVP of the US indies in 2019 with a monstrous run in GCW, Beyond Wrestling, and others, while Warner continues to shine with MLW and other indies. This will be as stiff a fight as you could imagine and expect both men to give it their all from bell to bell. 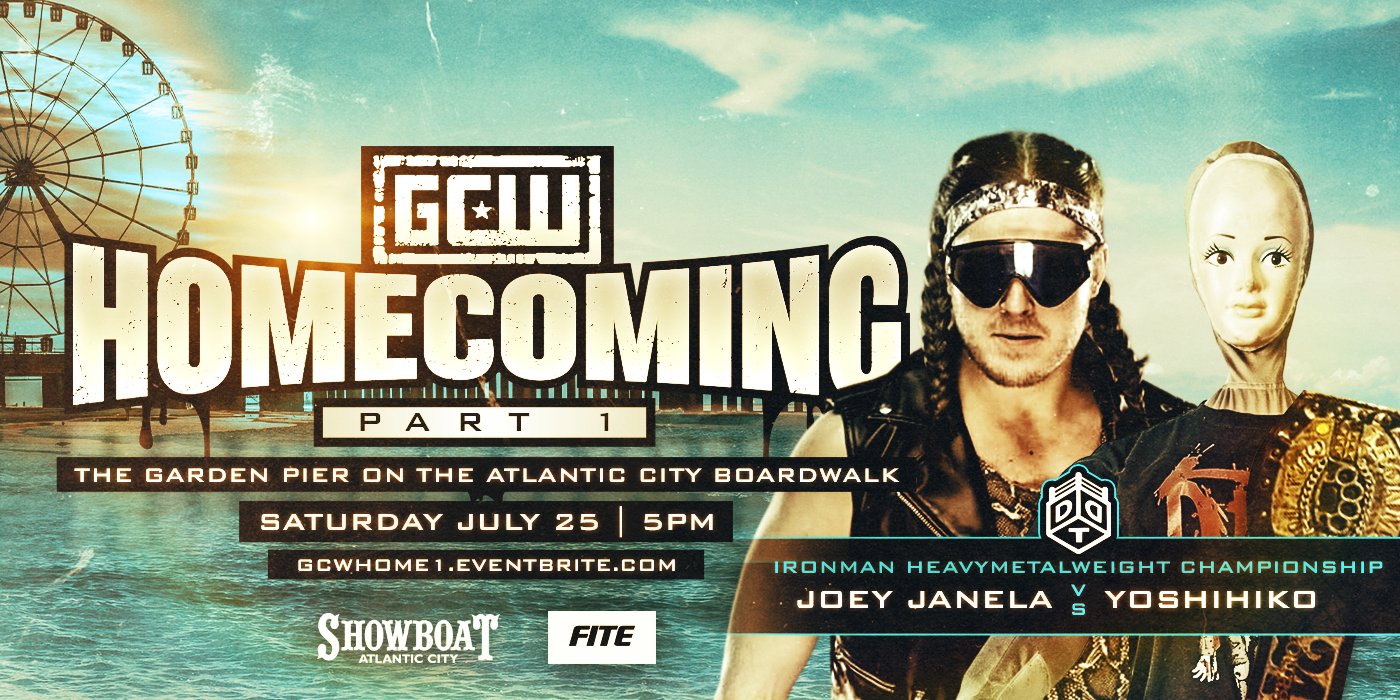 Japanese sensation (and yes, a blow-up sex doll) Yoshihiko has arrived in the US and is set to defend his DDT Pro Ironman Heavymetalweight Championship on Saturday when he faces off against a longtime GCW star and All Elite Wrestling (AEW)‘s Joey Janela. Janela is a master of comedic matches, including ones against The Invisible Man or his social distancing match with Jimmy Lloyd, but on Saturday Janela will go one on one with a Japanese legend! 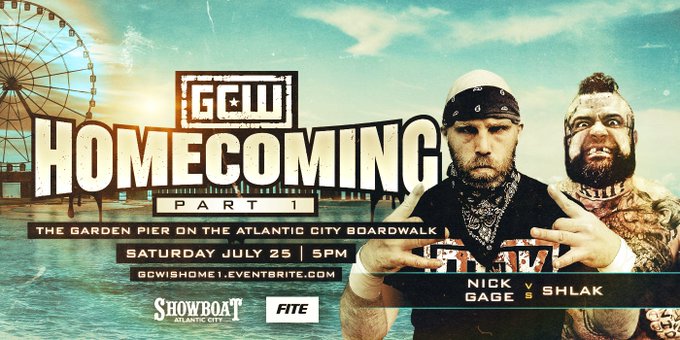 Ever since losing his prized GCW World title to AJ Gray last December, Nick Gage has been fighting his way into getting back into contention against current champ Rickey Shane Page, who made most of 2019 a living hell for the leader of the MDK gang. He lost his first attempt at reclaiming the title this past February at GCW Run Rickey Run, and then lost in the quarterfinals of the GCW Acid Cup 2 against Jordan Oliver. He picked up a win at GCW Wrld on GCW Part 2 over Nate Webb, but on Saturday he goes one on one against one of GCW’s resident monster machines in the form of SHLAK. SHLAK is a deathmatch beast who is seemingly immune to pain and that plays well into Gage’s wheelhouse, who will do just about anything to secure the win. 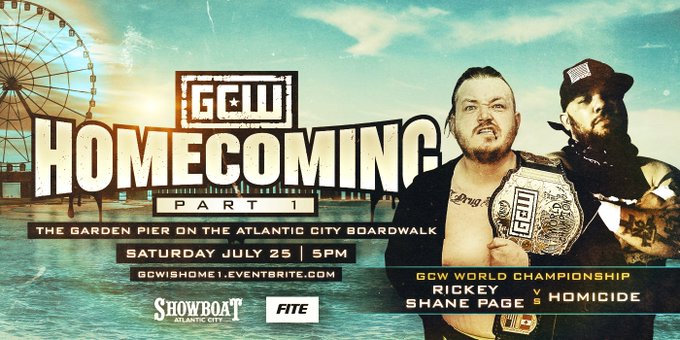 GCW World Champion Rickey Shane Page is set for his second title defense of the GCW World title on Saturday, after the pandemic slowed down his ability to do so, but he’s still approaching 230-days as the top dog in the GCW yard. His title defense on Saturday won’t be any easier than his last one against Nick Gage, as this time he’s facing an absolute legend of the US indies in Homicide. A former World Champion with Ring of Honor, a staple of TNA/IMPACT Wrestling as part of the original LAX, and a longtime competitor who has competed for most major indies in the US, Homicide is still as tough as he was 20 years ago, but now he’s smarter. A dangerous combination that could see Homicide win his next World Championship in Atlantic City, New Jersey.

Stay tuned to the Last Word on Pro Wrestling for more on this and other stories from around the world of wrestling, as they develop. You can always count on LWOPW to be on top of the major news in the wrestling world, as well as to provide you with analysis, previews, videos, interviews, and editorials on the wrestling world. GCW Homecoming Nights 1 & 2 will air live on FITE.tv, but you can also watch back catalog on IndependentWrestling.tv (IWTV).