Last Word on Pro Wrestling’s latest series, War of the Words, explores the art and impact of the promo by looking back through the archives. This series will examine all kinds of promos, from the most memorable or ones that have been overlooked and are underrated, showing the background of the promo, the promo itself, the aftermath of the promo, and what came from it. The most recent installment looks back at Roman Reigns’ short but effective promo following his win vs. Undertaker at WrestleMania 33.

Roman Reigns has been the most polarizing individual in all of pro wrestling since 2015 when he main evented his first WrestleMania. It was that point when many knew he was going to be the center of the WWE for a long time coming and that angered a lot of people. In 2017, he had one of the biggest matches and moments of his career when he faced The Undertaker at WrestleMania 33 to show who’s yard the WWE was. We take a look back at the feud and how it all led to his perfectly timed promo the night after WrestleMania 33 and what transpired from it.

Background: Who’s Yard Is It?

At the 2017 Royal Rumble, Roman Reigns competed against Kevin Owens for the Universal Championship in one of the best matches of that entire year. Owens managed to walk out with the win and seemingly left Reigns without a surefire WrestleMania match for the first time in three years. On the other hand, The Undertaker was entering the Royal Rumble for the first time since 2009. It was a moment of excitement for the fans and a chance for The Undertaker to go to WrestleMania for a championship match yet again. He was clearing people out as he entered at No. 29. He eliminated Goldberg, The Miz, and Baron Corbin. When the 90 seconds were up for No. 30, things started to make sense again.

Roman Reigns entered to some of the loudest boos in his career as the fans in San Antonio couldn’t believe the opportunity earlier in the night to fight for the Universal Championship wasn’t enough, but No. 30 had to follow for him. As Reigns looked eye to eye with The Undertaker, it was even more clear what was coming in his future. Reigns would eliminate “The Deadman” and stare him down, setting up a feud in the process without even speaking.

For the lead up to their big match, these two would debate who’s yard the WWE was now. Back then, The Undertaker had stood tall as the locker room leader and owner of the “yard” for 27 years and had no part of him ready to let it go. Reigns, the new unquestioned locker room leader, wanted to show his soon to be opponent that it was his time now. His yard now. The winner of the WrestleMania 33 main event would certainly make the claim that it was indeed their yard.

What went down in their match was something that made it abundantly clear who’s yard it was. The Undertaker didn’t belong in there with the likes of “The Big Dog” anymore. That’s the truth. And when the match came to an end with Roman Reigns standing tall over “The Deadman,” it was certain that it was Reigns’ yard moving forward. The final imagery of Reigns provided this new villain or anti-hero unlike any other. And to further that story, it had seemed it was the end for The Undertaker as well. It was a passing of the torch, followed by a promo that should have set up a great future for Roman Reigns. 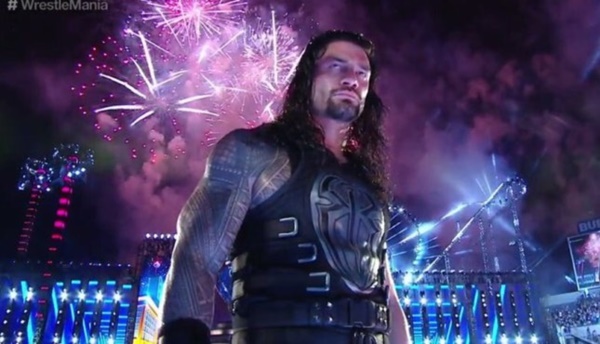 The Raw After Mania has become its own special event year after year and the night following WrestleMania 33 was another example of that. Following a night where many believed The Undertaker retired in the middle of the ring at the hands of Roman Reigns, it was almost like a warzone for “The Big Dog.” So, instead of waiting all night with the fans chanting “Undertaker” and “Roman sucks” as loud as anyone could hear, the music of Reigns hit to kick off the show, and the boos were at an all-time high. As Reigns walked down the ramp and got into the ring. Reigns, the villain he was to the crowd, simply soaked it all in.

Reigns stood there for a near two minutes with a smirk on his face, taking in the crowds hatred of him before dropping the perfect single sentence promo. Striking a chord with the fans and everyone at home that was heartbroken by the possible end of The Undertaker and the hate that filled them for Roman Reigns.

“This is my yard now”

And he dropped the microphone and walked away. So simple. So effective.

To no one’s surprise all these years later, the WWE mishandled Roman Reigns beyond belief following his win over The Undertaker. With that win, they had an opportunity to crown him the next great heel of the company or a possible anti-hero who doesn’t care about anyone but himself. Instead, he went back to being dry, mistreated Roman Reigns from before his feud with The Undertaker that the fans were sick of. And even more so after that big win, he lost a lot of key matches only hurting him more. It was as if they were scared to pull the trigger and crown him, but also insisted on him being the main babyface.

He entered a feud with Braun Strowman that did more for Strowman than him in every single way. Reigns then lost a huge match at SummerSlam that year to become the Universal Champion. After that, he was destroyed on the microphone by John Cena prior to their match at No Mercy, where Reigns walked out as the winner. He finished that year as the Intercontinental Champion. But that reign was only a two month one as he lost it at Raw 25.

And the reason for this mishandling? Because reportedly Vince McMahon had the plan a year in advance for Brock Lesnar to remain Universal Champion for a year and Roman Reigns would face him at WrestleMania 34 in the main event and get his crowning moment yet again. Instead of giving Reigns the chance to experience the first character change of his career and be that pompous, yet confident heel that ran through the old man at WrestleMania and confidently told the world that the WWE was his now, they went with him being same old, clean-cut Reigns.

This, more than possibly any run in his career, is what left a bad taste in the fans’ month when it came to Roman Reigns. He should have been treated as nothing but a megastar from the word go. What he brings on the microphone when he can be himself and in the ring is what makes Reigns a truly great talent. It’s too bad his legacy may be remembered more by what the fans thought of him instead of what he could have been following this perfect promo following the biggest win of his career — against The Undertaker at WrestleMania.

It’s a promo where you will always think back and ask what could have been.