ICW No Holds Barred (ICW NHB), formerly ICW New York, continues with their Deathmatch Drive-In series they began last month with Deathmatch Drive-In 2 on Saturday, July 4. It features some of the top deathmatch wrestlers in the US, with a few up-and-comers looking to make their mark. You can catch the entire event streaming live on IndependentWrestling.tv (IWTV) at 8pm EDT. 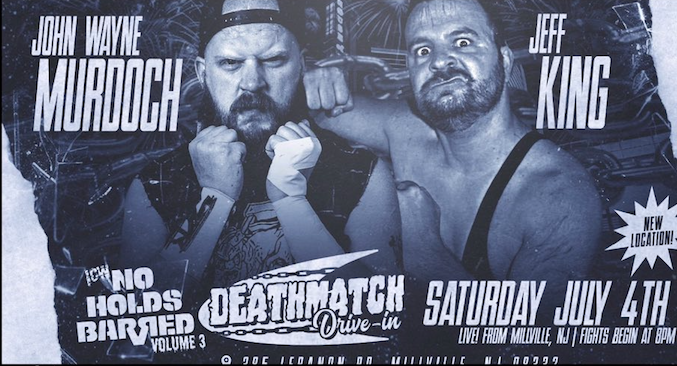 John Wayne Murdoch is no stranger to violence, both as a singles wrestler and in tag team action with The Rejects alongside Reed Bentley. Murdoch is a 5x IWA Mid-South Heavyweight Champion and has held tag team gold with The Rejects in Game Changer Wrestling (GCW), IWA Mid South, and Paradigm Pro Wrestling (PPW), and won the IWA-MS 2016 King of the Deathmatches Tournament. Michigan’s Jeff King is an old school deathmatch competitor who’s entering his 20th year on the circuit. He’s currently a regular with Detroit’s Horror Slam, but also competes for GCW, Hardcore Hustle Organization (H2O), and IWA M-S amongst others. This one will be bloody. 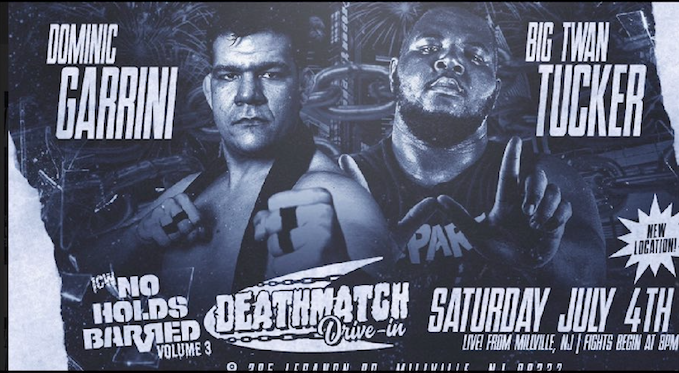 While this one may not be the bloodiest fight on the cards, it’s a solid showcase of two Ohio natives who are still on the rise in the US indies. Dominic Garrini was part of Catch Point briefly in EVOLVE Wrestling, but he’s been a regular with Ohio’s Absolute Intense Wrestling (AIW) for some time. While he’s made a name for himself the past year as well alongside Kevin Ku in Violence is Forever (formerly Sadkampf), he’s a technical machine and is signed to Major League Wrestling (MLW) as part of Tom Lawlor’s team. Big Twan Tucker has been an AIW regular for years now, and a student of Johnny Gargano. While AIW fans are well versed in Big Twan’s capabilities, he’s found some mainstream attention with some appearances in NXT alongside his mentor last year. A big man with surprising agility, this should be a great fight.

Eddy Only vs. Tim Donst 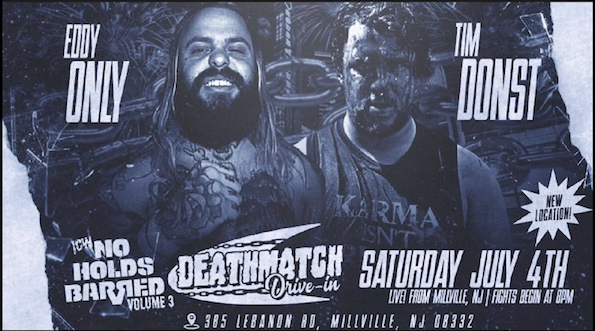 Eddy Only is another product from AIW, where he’s part of the large stable The Production. A regular competitor with IWA Mid South as well, he joined GCW last year as a member of Rickey Shane Page‘s new faction, 44OH. He’s colliding with arguably AIW’s MVP of the past decade in Tim Donst, a 3x AIW Absolute Champion and AIW Intense Champion, who has the grit to do whatever it takes to win a match. 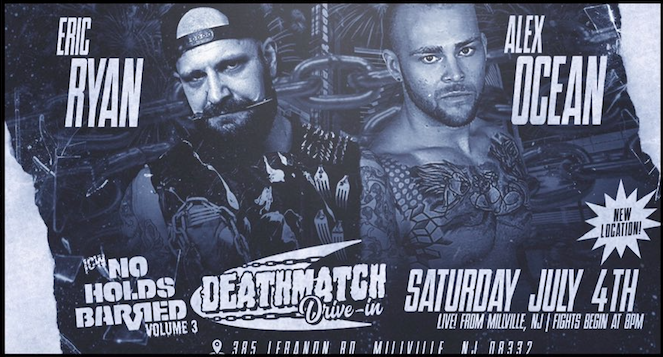 Eric Ryan has also been an AIW staple for well over a decade but really got his deathmatch credentials in the past few years with GCW. A solid ring grappler in his own right, Ryan can dish out the violence just as effortlessly. He’s taking on one of the most exciting young prospects out of the Florida indie scene in Alex Ocean, a regular with Coastal Championship Wrestling (CCW). But don’t think he doesn’t know his way around a match as violent as the deathmatch – last year he spent some time in Mexico with Desastre Total Ultraviolento (DTU), one of Mexico’s most violent promotions, and last July made his ICW NHB debut against Markus Crane for the Unsanctioned Pro Hardcore title. This will be another gut check test for the young Ocean, but he’s up for the challenge. 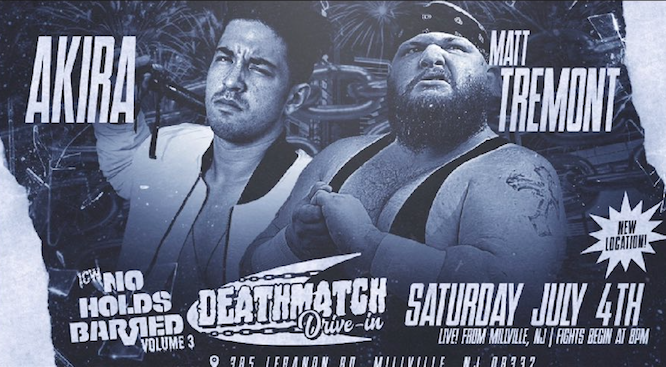 Akira has many nicknames – The Modern-Day Warrior, The Deathmatch Samurai, El Arma Exotica/The Exotic Weapon. But the young star earned “Breakout Star” following his ICW NHB debut last month at the first Deathmatch Drive-In, fighting The Rejects’ Reed Bentley. He’s only entering his third year as a pro, but the youngster from Indiana is ready to explode nationally. He’s got a huge obstacle in his way, though, in former Combat Zone Wrestling (CZW) and GCW World Heavyweight Champion “The Bulldozer” Matt Tremont, one of the true icons of deathmatch wrestling in the past decade. While Tremont may have the size and experience advantage, Akira is far more athletic and has the heart of youth to power him. Should be a great showcase for the young star’s abilities. 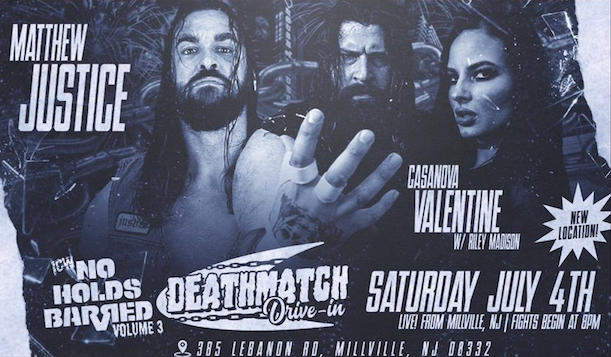 Matthew Justice is another AIW regular – as well as the reigning AIW Absolute and Intense Champion – who has become a hot commodity in the US indies over the past year or so. A combination of power, speed, and reckless abandon, Justice is a thrill maker and pain dealer. He’s going into war with another man who has seen his stock rise considerably over the past year in New York City’s Casanova Valentine, a grim menacing warrior who fights out of New York Wrestling Connection (NYWC) and Unsanctioned Pro, where he’s a former 3x Unsanctioned Pro Hardcore Champion. Two big men who aren’t afraid to bleed, this one will be an earth mover. 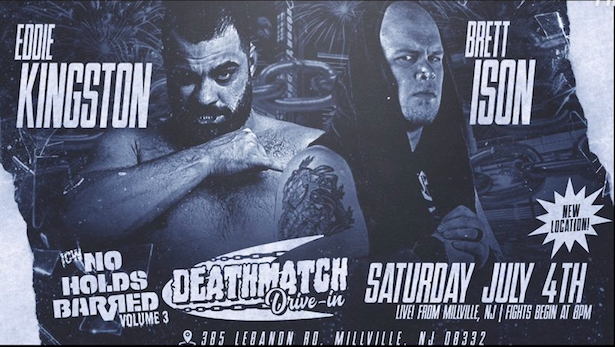 The past meets the present. Eddie Kingston is a legend in professional wrestling, from regular wrestling to hardcore. Nearly 18 years in the business and he’s won gold nearly everywhere, from the CHIKARA Grand Champion (for 924-days!) to CZW World Champion to IWA-MS Heavyweight Champion to 2x AAW Heavyweight Champion, he’s wrestled the best and proven he’s the best. The hard-hitting truth-talking bruiser is facing a young man who’s become a big star in the Southern wrestling circuits and is looking to go national in the form of Kentucky’s “Pitbull”, Brett Ison. Ison is a dominant force in Southern Underground Pro (SUP), where he held the SUP Bonestorm Championship for 336-days, and has also branched into St. Louis Anarchy, Paradigm Pro Wrestling, GCW, and ACTION Wrestling amongst others. Ison is a set of fists worth paying attention to and this one is going to be an absolute slugfest.

Stay tuned to the Last Word on Pro Wrestling for more on this and other stories from around the world of wrestling, as they develop. You can always count on LWOPW to be on top of the major news in the wrestling world, as well as to provide you with analysis, previews, videos, interviews, and editorials on the wrestling world. ICW No Holds Barred, Vol. 3: Deathmatch Drive-In 2 will be airing live on IndieWrestling.tv.