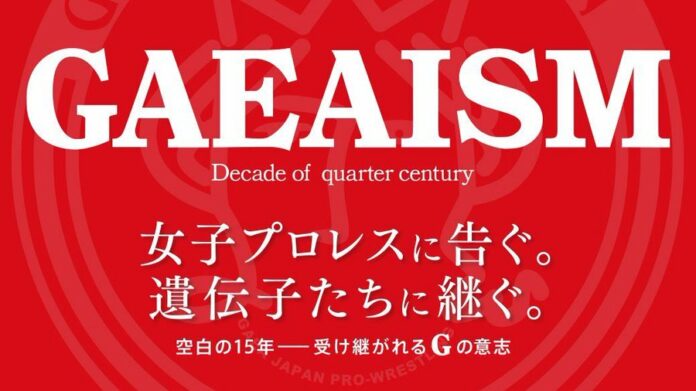 It was announced during a press conference that GAEA Japan would return for the first time in fifteen years as Chigusa Nagayo and Meiko Satomura celebrate the company’s 25th anniversary.  Most fans only know of All Japan Women’s Pro Wrestling (AJW) from the 90’s Joshi era but there were other companies active at the time.  One of these would be GAEA Japan, set up by the legendary Chigusa Nagayo as she came out of retirement to become the face of GAEA.

GAEA Japan would become notable as the space for the Crush Gals (Nagayo & Lioness Asuka) to return, both as rivals and as a tag team.  The return of the Crush Gals would be the biggest draw of the company as Nagayo and Asuka were two of the biggest stars to ever come out of AJW.  GAEA will also be remembered for producing Meiko Satomura who would take over for Nagayo as the company ace and would defeat Nagayo in the final GAEA match ever.

Nagayo and Satomura are reuniting to run this GAEA Japan return show with Nagayo’s Marvelous and Satomura’s Sendai Girls both providing talent for the event.  Two matches are announced so far, the first being Nagayo teaming with Satomura and Sakura Hirota to take on KAORU, Chiyako Nagashima, and Hisae Uematsu in a match representing GAEA’s past.  In the main event, Nagayo’s protege Takumi Iroha will take on Satomura’s protege Chihiro Hashimoto in a match representing the future of Joshi and the ongoing spirit of GAEAism.

The event takes place in Korakuen Hall on April 15th 2020.