Oregon’s Prestige Wrestling emerged in 2017 as a new promotion in the US Pacific Northwest indie scene, and by late 2018 they were available on IndependentWrestling.tv with their frequent events. Prestige returns to the Roseland Theater in Portland, Oregon this Sunday, live on IWTV, with Roseland, a top-notch card featuring some of the premier talents in the US indie scene appearing on one card. It airs on Sunday night at 7pm PDT (10pm EST).

Alex Zayne vs. Adrian Quest vs. Jaiden vs. Andrew Bennett vs. Tyler Bateman vs. Mike Santiago

A solid six-man match showcasing some of the best of the West Coast with some top US national stars. Alex Zayne has blown up in 2019 since his Game Changer Wrestling (GCW) debut this past July, and his daredevil athleticism is now being booked all over the country, including last weekend’s PWG Battle of Los Angeles. Adrian Quest is a long-time veteran of California’s Empire Wrestling Federation (EWF). At only 20-years old, Jaiden is the future of the Pacific Northwest scene. A chance to showcase himself against five other top talents is a perfect platform for him. Andrew Everett is on a redemption run on the indies following injuries and his departure from IMPACT last year and is reminding many crowds just how good he can be. Tyler Bateman is another of the top stars on the West Coast indies who has been breaking into the Eastern scenes, including occasionally running with The Butcher & The Blade. Mike Santiago is normally seen in tag team action, as he’s one half of Amerikan Gunz, one of the most successful tag teams on the West Coast the past few years, especially in the Pacific Northwest, where they’re 5x West Coast Wrestling Connection (WCWC) Tag Team Champions, as well as former champs with DEFY Wrestling and DOA.

A Japanese legend, Kikutaro is now US-based and resides on the US West Coast in Las Vegas, Nevada. He’s become a regular on the West Coast scene (and the rest of the US) and he’s legendary comedic combat style heads to Portland on Sunday. He’s facing Ethan HD, the other half of Amerikan Gunz (his partner Mike Santiago is going solo in the 6-man match elsewhere on the card).

Former ECW World Champion and WWE Superstar Rhyno is making his return to the US indies, including returning to IMPACT Wrestling where he’s a former World Champion. He’s at Prestige Wrestling on Sunday night, where the “Man Beast” will face off against Bull James in a rematch five years in the waiting. Back in 2014, both Rhyno and Bull – then known as Bull Dempsey – were regulars with NXT and on a May 2014 episode of NXT fought each other in singles competition. The young Bull was no match for the Rhyno. But since leaving WWE in 2016, Bull James has found a solid run in the US indies and will love to show Rhyno what he’s learned since they last collided five years ago.

Two entrants from this year’s PWG Battle of Los Angeles head north to Portland to face off on Sunday night, in Mexico’s Puma King and Tony Deppen, one of the US indie scene’s best-kept secrets. Both men lost their first-round match-ups – Deppen to AEW’s Pentagon Jr. and Puma King to the eventual winner, Bandido – so they’ll both have a lot to prove on Sunday after early BOLA exits.

A year ago, Mance Warner was bubbling under in the Midwest hardcore scene, and now he’s a former Combat Zone Wrestling (CZW) World Champion, a regular with Major League Wrestling (MLW), and an exploding star on the US indies coast to coast. An unrivaled reckless abandon, Warner can have hard-hitting brawls or bloody deathmatches with ease. On Sunday, it will be the latter, as he faces one of the wildmen of the Pacific Northwest indies. “The Devil Himself” Drexl has been a part of the Pacific Northwest indie landscape since the late 2000s, with over a decade of service with another Portland indie, Don’t Own Anyone (DOA) Pro Wrestling. He’s also a regular servant of destruction across the border in Vancouver, Canada with Elite Canadian Championship Wrestling (ECCW), as well as Seattle’s DEFY Wrestling. This will be a bloodbath.

“The Crown Prince of Lethargy” and one of the newest stars with All Elite Wrestling (AEW), Orange Cassidy continues his indie winddown with a Pacific Northwest stop in Portland to face off against someone used to more aggressive and faster opponents. He’s facing off against former IMPACT Knockouts Champion Su Yung, known more for her hardcore matches on the indies.

While Warner vs. Drexl may be the bloodiest match of the night, the hardest hitting will no doubt be the main event. Prestige Champion “Filthy” Tom Lawlor has transitioned from MMA to indie superstar, winning championships in MLW and Black Label Pro, as well as currently holding the Absolute Intense Wrestling (AIW) Absolute Championship. His title is on the line on Sunday against Chris Dickinson. “Dirty Daddy” was part of Doom Patrol and Catch Point for years, and for a while, people seemed to forget how much of a wrecking machine Dickinson was on his own. The past year he’s been reclaiming his legacy, in Beyond Wrestling, GCW, Bar Wrestling, Black Label Pro, and much more, showing that Dickinson’s time is finally upon us.

Stay tuned to the Last Word on Pro Wrestling for more on this and other stories from around the world of wrestling, as they develop. You can always count on LWOPW to be on top of the major news in the wrestling world, as well as to provide you with analysis, previews, videos, interviews, and editorials on the wrestling world. Prestige Wrestling Roseland will be airing live on IndieWrestling.tv on Sunday night at 6pm PDT (9pm EST) 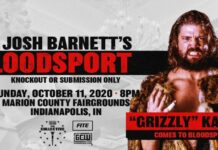 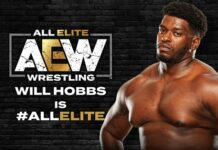