Earlier tonight, Casey Michael of Squared Circle Sirens, broke the news that Kacy Catanzaro was done with WWE due to a back injury she sustained and had been dealing with for quite a while. Casey would go on to detail that Kacy had a problem with her discs in her back and called it quits.

Kacy Catanzaro made her debut with match with the company when she faced Reina Gonzalez at the previous Mae Young Classic. After winning in her debut match, she would eventually lose to Rhea Ripley. Before her career with WWE, Kacy Catanzaro made her name well known all over the world by competing in the uber-popular show, “American Ninja Warrior”.

Kacy’s career thus far had her compete in 55 matches, consisting of matches in NXT, NXT UK, the Mae Young Classic and WWE specials such as “When Worlds Collide”, and the Royal Rumble Axxess event. 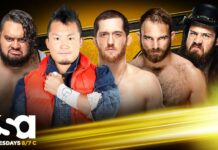