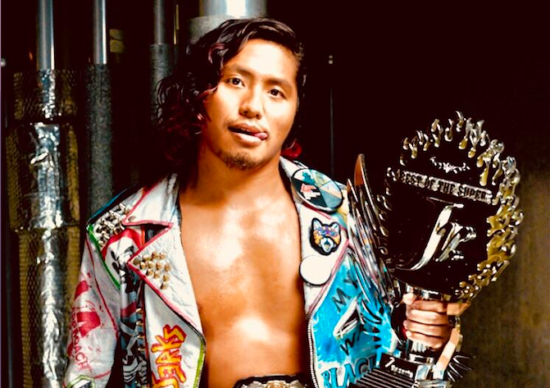 July 7, 2018 was supposed to be a monumental day for New Japan Pro Wrestling. Following a string of successful US shows in 2017 in the US, the NJPW G1 Special in San Francisco was supposed to be the next phase in the New Japan expansion into the US market. But instead, it’s best remembered as the night that IWGP Junior Heavyweight Champion Hiromu Takahashi broke his neck in a match against CMLL’s Dragon Lee.

In the weeks that followed, many feared the worst. That he may never walk again or at the very least, would be forced into early retirement from the ring. New Japan was still feeling the effects of the 2017 retirement of Katsuyori Shibata due to a headbutt gone wrong – to lose another star and one much younger than Shibata – would be a death sentence in the US media’s eyes. As Takahashi recovered from his surgery and began his rehabilitation, his recovery and improvements were followed by the Japanese media. In mid-February, Takahashi sent out a tweet, with resounding good news. He was at  “94.3% recovery”.

It was followed by reports from The Wrestling Observer Newsletter this week that stated that Takahashi was returning sooner than many expected and that he would be making a surprise appearance at an upcoming NJPW event to announce his return date. For what its worth, Hiromu has been actively retweeting all news in regards to this year’s Best of the Super Juniors 26, that begins in May, which would be an ideal platform to make his grand return on. There would be no better moment in 2019 that Takahashi winning back to back Super Juniors and reclaiming the IWGP Junior Heavyweight title he was forced to vacate due to injury.

The question is which event will he make his appearance to announce his return date? The G1 Supercard at Madison Square Garden on WrestleMania weekend may be the best option, as the mainstream media of the world will be on hand. But it isn’t the only option. In fact, it could be argued that that may be more of an ideal venue for his return match over the Super Juniors, perhaps in a rematch against the man who he faced last, Dragon Lee.

Which only leaves two options for his return announcement. He could appear on the opening or closing night of the New Japan Cup that starts this coming weekend, or more likely, he could appear this coming Wednesday at New Japan’s 47th Anniversary Show.  After all, his old foe Dragon Lee is set for action in a 10-man tag match. Regardless, its great news to hear that the 29-year old is able to return to the sport he loves and continue to entertain fans around the world.