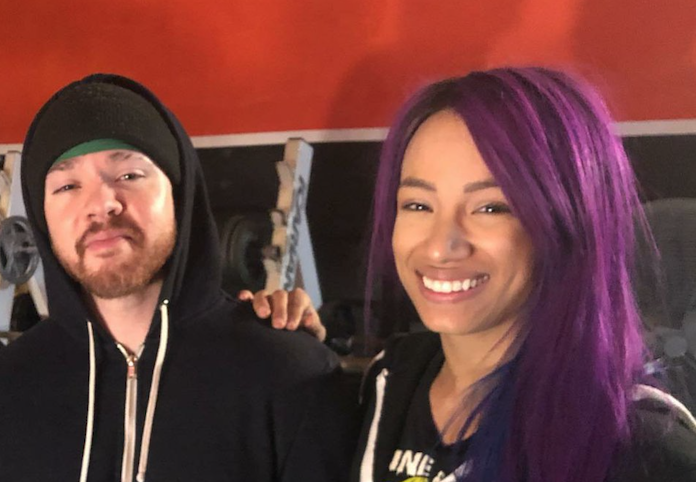 Today on the WWE’s Social Media platforms, the company released a training video of Sasha Banks preparing for her Royal Rumble showdown this Sunday against Raw Women’s Champion Ronda Rousey. To prepare for the former UFC Champions’ techniques, Sasha returned to the WWE Performance Center in Orlando and trained alongside 205 Live‘s Drew Gulak, NXT‘s Oney Lorcan and fellow WWE Superstar Charlotte Flair. But shortly into the journey, Sasha heads to Brooklyn, New York to meet up with her “guru”, indie legend Amazing Red, at the House of Glory (HOG) wrestling school. “Anytime I have any big matches, he is the guy that I go to,” Banks said. “He is my guru. He’s someone I go to and say ‘Is this possible?’ and he tells me ‘Yes’ or ‘No’. All my biggest matches, I’ve come to him.” For longtime fans of the US indie revolution of the past two decades – or longtime fans of TNA/IMPACT Wrestling – Amazing Red is someone they’re well acquainted with. But for those who are unfamiliar, he’s a look at the man Sasha Banks turns to as her most trusted wrestling strategist.

Originally from Puerto Rico, the man known as Amazing Red – real name Jonathan Figueroa – began training at the age of 16 in 1998, when he convinced former 2x ECW World Heavyweight Champion Mikey Whipwreck to train him at the infamous House of Hardcore school. He started out in local indies in the New York area, before heading back to Puerto Rico to work for Savio Vega‘s International Wrestling Association (IWA), one of the hottest promotions on the island. Originally wrestling as simply Red, it was Savio Vega that began adding adjectives to his name, before settling on “Amazing Red”.

By 2001, Amazing Red was an emerging star with Combat Zone Wrestling (CZW), while becoming one of the top prospects in the New York/New Jersey area with the likes of Jersey Championship Wrestling (JCW, now Game Changer Wrestling) and Impact Championship Wrestling (ICW New York). In early 2002, he caught the attention of new indie upstart Ring of Honor, where he faced the likes of Low Ki, Jay Briscoe, CM Punk and “The American Dragon” Bryan Danielson.

By the summer, he had also garnered the interest in another new promotion, Jeff Jarrett‘s Total Nonstop Action (TNA), debuting that July against Low-Ki. It didn’t take long for Amazing Red to captivate the audience and the management, and he was feuding for the X-Division Championship with former ECW World Champion Jerry Lynn and competing against another bright young star named AJ Styles. By 2003, he made his debut in Japan with All Japan Pro Wrestling (under the name Spriggan), while continuing to be a mainstay with both TNA and ROH. He would win tag team titles in TNA alongside Jerry Lynn as well as the X-Division Championship and in ROH would strike tag team gold with AJ Styles.

By 2005, he had left both TNA and Ring of Honor, branching out to new expanding indie regions, like IWA Mid South and New York Wrestling Connection (NYWC). But in 2006, he announced his retirement from pro wrestling following two matches in January and disappeared from the wrestling scene for nearly two years.

He made his return to pro wrestling in December of 2008 at Jersey All Pro Wrestling (JAPW) and in 2009, made his return to TNA. He lasted another three years with TNA, winning two more X-Division Championships, before once again departing the company in 2011.

Upon his departure, he opened up the House of Glory wrestling school in Brooklyn, New York, throwing their first show on May 5, 2012, entitled High Intensity. In the main event, Amazing Red defeated Brian Kendrick, on a card that featured such current stars as Jay Lethal, Eddie Kingston, and an exciting emerging tag team known as The Young Bucks. As he slowly built up his own HOG from simply a school into a new New York indie promotion, he continued to work the likes of NYWC, Victory Pro Wrestling (VPW) and even a return to Ring of Honor for the first time in eight years, at the ROH 10th Anniversary Show, where he teamed with current 205 Live star TJP against Michael Elgin and Roderick Strong.

Since then, Amazing Red has primarily kept to himself, running House of Glory (the school and the promotion). He picks and chooses his matches now, usually a handful or so a year, and mostly in a HOG ring. So if you happen to see the name Amazing Red pop up on a show near you, it’s worth the time to check it out. One of the most gifted and entertaining pioneers of the US indie scene, Amazing Red is not only a guru to WWE Superstar Sasha Banks, but to the entire US indie scene as we know it today.