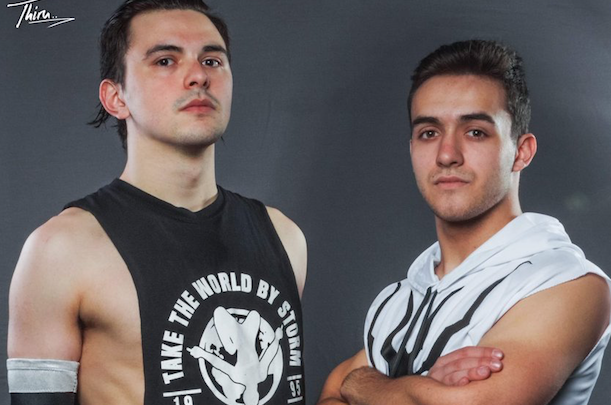 Spanish supernovas Anonymous Kid (A-Kid) and Carlos Romo are heading to the United Kingdom. Today Carlos Romo, formerly known as Adam Chase, announced his departure from Spain, the country they help built a wrestling scene, and will officially accept booking from the booming UK wrestling scene. The pair of Spaniards has been on fire lately, with opportunities in the United States, Germany and the UK arriving for the promising stars. A-Kid had announced his move late in 2018.

From Spain to All of Europe

A-Kid came to prominence with his incredible matches against NXT North American Champion Ricochet and Zack Sabre Jr. With the latter, A-Kid earned a rare five-star match from Dave Meltzer. Known as Anonymous Kid, he alongside Carlos Romo developed the wrestling school/promotion known as White Wolf Wrestling, which exploded in Spain and had a soldout in their first paid show ever last year.

Carlos Romo is also a promising star. He started to gain recognition by tagging with A-Kid and having solid appearances in PROGRESS Wrestling, Rev Pro and ATTACK! Pro Wrestling. He was known first as Adam Chase, but he changed his name because he wanted a better representation of his country and his name was the first step.

Together, Romo and Kid exploded in CHIKARA, competing in the King of Trios tournament against British Strong Style and later getting invitations from Revolution Pro Wrestling and Progress. The pair also elevated Triple W, making wrestling a hot business in a country not known for it. From A-Kid’s 5 Star Match and Romo’s perseverance, companies like Over the Top Wrestling, Fight Club Pro, Frontline Wrestling and wXw in Germany started to call. Last week, the Triple W team released their match against British Strong Style in Spain and had everybody raving about it. Moreover, their latest match against the Lucha Brothers (Pentagon Jr. & Rey Fenix) in America had the crowd throwing money on to the ring.

The move to the UK will benefit the hot duo. The British scene is hungry for them and being close to a territory that has shows every week can boost their experience and exposure. With companies like Rev Pro and Progress looking for more regulars appearances from them, is a no-brainer their move to the UK. Expect to see A-Kid and Carlos Romo in America and other international places in 2019.