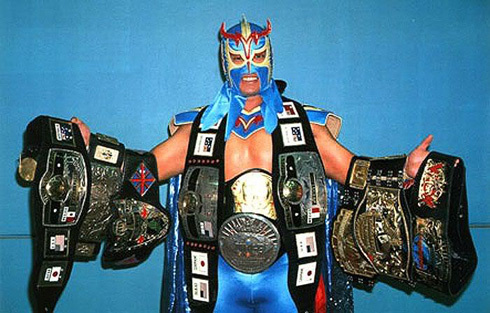 Ultimo Dragon was originally denied his chance at the J-Crown, when he was pinned by The Great Sasuke in a 14-minute affair in the J-Crown finals at G1 Climax ’96, but it wouldn’t be his last chance. On October 11, 1996, he would defeat Sasuke for the J-Crown at a Wrestle Association R (WAR) event, Osaka Crush Night. Along with his NWA World Middleweight Championship, which he’d won in late 1994, it brought his belt collection to nine titles. On December 29, 1996, he upped that total to his peak of 10, when he defeated Dean Malenko at WCW’s Starrcade ’96 for the WCW Cruiserweight Championship. Heading into 1997, Ultimo Dragon was now the most decorated champion in the world (and history).

THE J-CROWN CHAMPIONSHIP: THE COLLAPSE

In January of 1997, Ultimo Dragon lost the J-Crown Championship (and all of it’s eight belts) to the title’s creator, Jushin ‘Thunder’ Liger, at Wrestling World ’97 at the Tokyo Dome on January 4, 1997 (the precursor to what is now Wrestle Kingdom). Liger defended the J-Crown, but on June 6 of that year, he lost the WAR International Junior Heavyweight Championship to Yuji Yasuraoka at a WAR event, dropping the J-Crown down to seven titles. A month later, Liger lost the now septuple J-Crown titles to El Samurai, who then lost it himself to Shinjiro Otani in August. Otani would be the last holder of the J-Crown Championship. In November of 1997, the WWF decided to reactivate it’s Light Heavyweight division and needed to recall the original belt that was still being defended in Japan, effectively withdrawing the WWF Light Heavyweight title from the J-Crown, reducing it one more to only six belts. Otani decided to dissolve the belt, keeping only the IWGP Junior Heavyweight title and vacating the remaining five championships back to their respective promotions.

CAN AUSTIN ARIES BEAT THE RECORD

He’s got six titles, but can Austin Aries realistically hit ten belts (or eleven to break the record), before the storyline wears thin and the belts start to get returned to their home promotions? Aries has already shown up in Ring of Honor to challenge for the ROH Television title, so there’s a potential seventh. Now feuding with Lucha Underground Champion Pentagon Jr. in upcoming Impact tapings, could Aries have possibly been a part of the top secret tapings for Lucha Underground’s Season Four and challenged (and won) the title? With Aries working closely with Impact, and appearing for two Impact-friendly indies in Canada, Border City Wrestling (BCW) in Windsor and Destiny World Wrestling (DWW), could he add their top two titles (Impact’s Kongo Kong is the BCW Can-Am Heavyweight Champion, although WWE UK Champion Pete Dunne is DWW’s current reigning Champion). Austin Aries has also appeared for MLW (who just got a television contract) and House of Hardcore (who just crowned their inaugural HOH Internet Championship), adding two more possible belts of contention. And with Nick Aldis touring the globe on his Ten Pounds of Gold journey defending the NWA World Heavyweight Championship, is that something that Aries could challenge for and potentially add to his collection? The record is well within his grasp, with enough potential titles within reach that by the end of 2018, Austin Aries could actually tie – or potentially beat – Ultimo Dragon’s ten belt record.