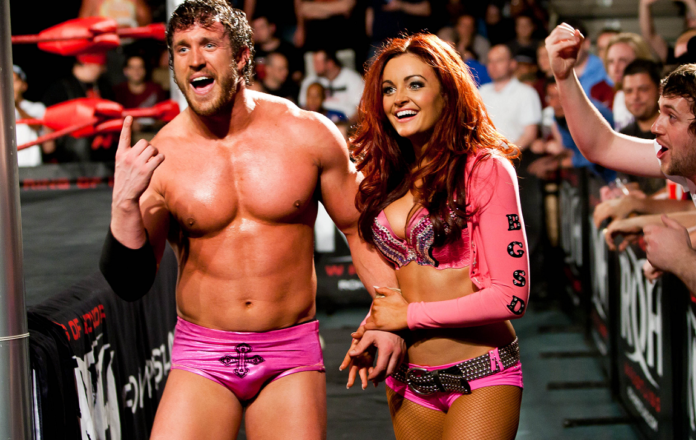 McKenna first broke the news a few days ago that both Maria and Bennett were backstage the past two weeks at Smackdown Live, after being quiet on the scene since leaving Impact Wrestling on March 1st (along with recent WWE returnees The Hardy Boyz and Drew McIntyre).

It was reported earlier today that both Maria Kanellis and her real life husband, Mike Bennett, had indeed signed with the WWE and will debuting on the main roster instead of going through NXT. The thinking is that Smackdown Live could use the addition of strong heel characters and the pairing could add to the next season of Total Divas now that Paige and Eva Marie are most likely finished with the show.

Maria Kanellis is the most familiar name to WWE fans, as she had a six-year run with the company between 2004 and 2010. A 2004 Divas Search contestant, Kanellis finished 5th in the competition, but was still signed by the WWE to a contract. During her 6-year stay in WWE, she was involved with many big angles with the company and was one of the last Divas to appear for Playboy, with a cover feature in 2008. She was released from the company in 2010 and within a year, re-emerged in Ring of Honor, accompanying her new boyfriend, Mike Bennett of the faction, The Kingdom.

Mike Bennett has been wrestling since 2002 and prior to joining ROH in 2008, he cut his teeth in New England Championship Wrestling (NEW) and Top Rope Promotions (TRP), while also wrestling dark matches for the WWE and Impact Wrestling. In 2014, Bennett and Maria (the two were married in October of that year) formed The Kingdom, alongside Matt Hardy and Adam Cole. Hardy was eventually replaced with Matt Taven, until Bennett and Kanellis left ROH in December of 2015 (Cole eventually left and Taven has since continued the Kingdom with TK O’Ryan and Vinny Marseglia).

Bennett and Kanellis debuted in Impact Wrestling several weeks later, with Bennett using the moniker “The Miracle”. Maria would go on to become the head of the Impact Knockouts Division, forming a heel cabinet including Sienna, Laurel Van Ness and apprentice Allie, scoring herself a Knockouts title in the process. When Anthem took over ownership of Impact Wrestling earlier this year, Kanellis and Bennett both made the decision to leave, alongside other Impact stars like Matt and Jeff Hardy, Jade and Drew Galloway.

It now seems that Maria has headed “home” to the WWE along with her husband, with their debut on Smackdown Live coming sooner than later (possibly even tonight).