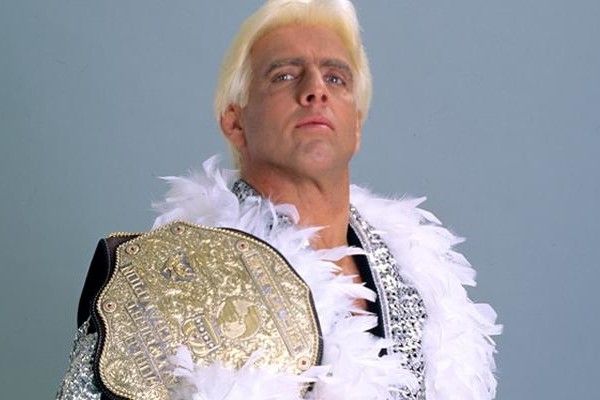 Okay. That title was a tad misleading. First, it’s not about the World Heavyweight Championship belt lovingly known as “Big Gold” – you know, the one that was used in WCW and later in WWE as their own separate World Heavyweight title. But it sounds so warm and fuzzy. And secondly, it’s exclusively World Heavyweight Championships (or the top World Championship belt for each promotion). Lastly, the requirements are the major promotions that have somewhat recognized a World Champion. So Cousin Billy’s Backyard XXXtreme Wrestling‘s Alabama World Championship is not considered, even if Flaming Frankie Starr won it 27 times. But with the recent tying of Ric Flair‘s record 16 World titles by John Cena and Randy Orton‘s 13th World title win at WrestleMania 33, it seemed like a good time to look at just who the most decorate World Champions in professional wrestling are. Not by promotion, but by promotions. As in, their combined totals from multiple promotions. For the record, the promotions considered for this are as follows: WWE (including WWWF and WWF), WCW, NWA (both prior to and after the WCW), TNA, Ring of Honor, NJPW (IWGP), AJPW, CMLL and AAA. There are arguments for others, but for now, we’re keeping it to those, as they all have been defended elsewhere globally than just the home country of the promotion.

With that in mind, there are two asterisks. They are not on this list, despite their enormous amount of world titles, because their “World” title was never defended outside of their regional territory (or much beyond).

While it’s true Verne Gagne spent a lot of time in Japan early in his career, it wasn’t to defend his AWA World Championship. Nearly 100% of Gagne’s title defences were held within Minnesota and the surrounding territory of the AWA’s reach.

Dick The Bruiser was a 13-time World Heavyweight Champion in his own WWA (World Wrestling Association), based out of Indianapolis. Like many of the territories regional World Champions, The Bruiser rarely defended outside of Indiana.

Fritz Von Erich was a 20-time World Champion for his own WCCW in Texas, but much like his son after him, rarely defended outside of the Southern states.

Jerry “The King” Lawler is a 28-time USWA Unified World Champion – the kayfabe unification of the AWA World title and the WCCW World title. Lawler was the reigning AWA World Champion in 1989 and during that reign he defeated Kerry Von Erich for the WCCW World Heavyweight Championship. This created the USWA Unified World title (which AWA withdrew their title from), which Lawler held 28 times. But Lawler only left Memphis on two occasions to defend the belt, so it can hardly be classified as a true World title.

Closing In On The Top 10

AJ Styles he has the best shot of entering the Top 10 by next year. Whether he wins another World title in the WWE (which is highly likely) or he returns to Japan or ROH (where it’s also entirely likely he would win at least one), Styles is the only active wrestler on the list not called John Cena and Randy Orton, so is definitely close to striking distance.

The Top 10 Most Decorated World Champions in Professional Wrestling

In the case of tie breakers, the man with the most diversity in his promotional accomplishments will be ranked first. It’s far more impressive to win the favours of multiple promotions to anoint you World Champion, than having one company keep handing you Employee of the Month (yeah, I’m looking at you, John Cena). So without further adieu, here’s your Top 10 Most Decorated World Champions in Professional Wrestling.

Okay, technically all 10 of The Rock’s World titles fall under WWE jurisdiction, because his two WCW World Heavyweight title wins came during the WCW Invasion angle. But he’s still a 10-time World Champion, defending it in the US, Canada, Europe and beyond.

Jarrett was a perennial mid-card stud in the WWF (his six IC reigns ties him at #2 of all time with The Miz and Rob Van Dam, behind Chris Jericho’s record of 9), but when he went to WCW in the late 1990’s, he suddenly became World Champion material. Ol’ Slap Nutz won Big Gold four times before WCW folded. As the focal point of his own upstar TNA, he would win the NWA World Heavyweight Championship 6 times.

Sadly, this number would most likely be much higher if injury didn’t cut his career short in 2011.

Hogan won five titles in WWF before jumping to WCW where he claimed six more. He returned to the WWE in the early 2000’s, where he collected his final World Championship.

Angle was a 6-time World Champion under the WWE banner (one of them the WCW title during the Invasion angle), before he left the WWE for TNA. He was the inaugural TNA World Heavyweight Champion and would win it five more times before leaving the promotion last year. While it’s possible he could have one more reign left in him (hey, if Goldberg can do it, so can Kurt), but chances are his injuries will prevent WWE from heading that route.

The face of WCW throughout the 90’s, Sting balked at joining the WWE following WCW’ demise and instead went to TNA, where he captured 5 World titles (1 NWA World Heavyweight and 4 TNA World Heavyweight) in his 11-year stint with Impact Wrestling.

Randy Orton has been a steady workhorse since his 2002 debut and he collected his 13th WWE World title this past Sunday at WrestleMania 33. Will he surpass his mentor from Evolution, Triple H, before he calls it a career?

The King of Kings has amassed a staggering 14 World Championships over his career. And while many will say it was a product of his marriage, most of Triple H’s title reigns were short lived and his championships were used more to give rubs to those they were pushing ahead of him. Still, 14 World titles is 14 World titles.

Cena still has lots in his tank, so it’s not unlikely that we’ll see Cena break Flair’s record in the next few years.

One of the most controversial records of all time, as the number varies depending on who you talk to. According to the WWE and NWA – the owners of the record books documenting his wins – Flair held the titles 16 times. Flair himself considers himself a 21-time World Champion, while other sources have him pegged as 25. The discrepancy comes from many title changes that local regional bookers did to put over local stars that were unsanctioned matches by the NWA (hence why NWA never acknowledged them).

Oddly enough, for contrast, here’s the Top 10 List of the World Champions with the longest amount of days with the title held. It’s a bit different isn’t it…