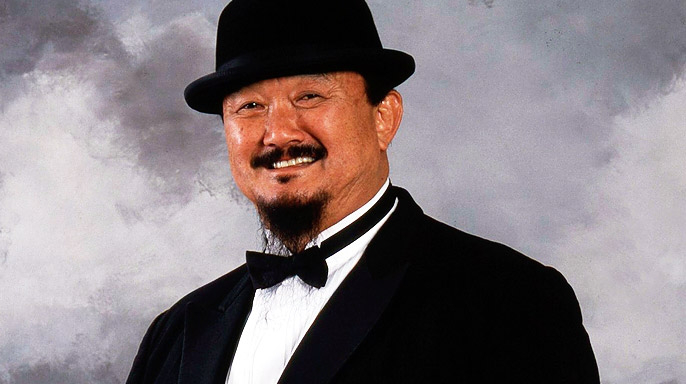 The world of professional wrestling was saddened today with the news that Harry Fujiwara, better known to the world of wrestling as Mr. Fuji, had passed away at the age of 82.

While perhaps best remembered as one of the WWF (and pro wrestling’s) most nefarious heel managers of all time, Mr. Fuji was a tremendous hand as a wrestler himself. Although billed his entire career as being from Japan, Fuji was actually an Asian-American, born in Honolulu, Hawaii in 1934. His wrestling career began, like many, in one of the vast NWA regional territories, beginning his home state Mid-Pacific Wrestling in 1964 as Mr. Fujiwara, alongside such legends as King Curtis Iaukea (whom he won the NWA Hawaiian Tag Titles in January of 1965) and “High Chief” Peter Maivia (The Rock‘s WWE Hall of Fame grandfather). He moved the NWA Pacific Northwest territory in Oregon, shortening his name to simply Mr. Fuji, where he captured the NWA Pacific Northwest Heavyweight Championship from Moondog Mayne in 1970, as well as four reigns as Pacific Northwest Tag Team champions, three of which with Haru Sasaki. By 1972, he was a full time performer for Vincent J. McMahon, Sr and the World Wide Wrestling Federation (WWWF, the precursor to WWF and WWE).

For two years, Fuji, alongside his partner Professor Toru Tanaka and manager The Grand Wizard, wreaked havoc on the WWWF, capturing WWWF World Tag Team gold from Sonny King and Chief Jay Strongbow in June of 1972, holding the belts for a stunning 337 days (a reign bested only by Demolition (468), New Day (371 and counting), and The Valiant Brothers (370)). They even fended off challengers from the combined team of WWWF World Champions Bruno Sammartino and Pedro Morales in their prime. After two runs as World Tag Team Champions, Fuji and his partner Tanaka left the WWWF to return to the NWA territories for a few years, winning gold wherever they went.

They returned to the WWWF in 1977, this time taking “Classie” Freddie Blassie on as their manager, once again winning World Tag Team gold by defeating long time rival Tony Garea and his new partner Larry Zybysko. The second run, while eventful, lasted shorter than the first, and soon they were back touring the world, wrestling in territories around the world.

Fuji would return once again, in 1981, to find the WWWF now the WWF and McMahon Sr.’s son, Vincent K. McMahon, more in control of the company and direction. Pairing up with Mr. Saito, and under the management of a heel Captain Lou Albano, they would win two more WWF World Tag Team titles, securing Fuji’s ranks as one of the WWF’s most prolific tag team specialists, with five championships. He soon drifted into singles territory, following a turn on his protegee Tiger Chung Lee, before retiring as an active wrestler in 1985.

Fuji had long been a master of ring psychology. His trademark move of throwing salt into his opponents eyes made him one of the world’s most effective heels. A man of few words, his actions spoke louder than anything his voice could muster. He carried that into his work as one of the top managers of the 1980’s Rock N’ Wrestling Era. Nicknamed “The Devious One”, Fuji was menacing in his silent gaze, and when it broke into a vicious scowl, it was frightening. Under his guidance, he managed Demolition (Ax & Smash) to their record setting 468 day reign as WWF World Tag Team Champions, as well as former Intercontinental champion The Magnificent Muraco, George “The Animal” Steele, Jim “The Anvil” Neidhart (whom he sold to Jimmy Hart to create the Hart Foundation), Killer Khan, Kamala, The Powers of Pain (Barbarian & Warlord), and The Orient Express (Pat Tanaka & Akio Saito). He retired from the wrestling industry in 1996, following another successful run in a partnership with his “spokesman” Jim Cornette, managing WWE Hall of Famer Yokozuna, both as a 2-time WWF World Champion and as a 2-time WWF World Tag Team Champion alongside Owen Hart.

Mr. Fuji was rightfully enshrined into the WWE Hall of Fame in 2012, where he was inducted by one of his many successful “clients”, Don Muraco.