The Kansas City Chiefs need help at wide receiver, and undrafted free agent Justyn Ross could be the unlikely man for the job. Even though Ross didn’t hear his name called during the 2022 NFL Draft, the Clemson product was widely considered one of the most talented receivers in the class and could be the latest steal by General Manager Brett Veach.

Following the trade of Tyreek Hill, the Kansas City Chiefs need somebody to step up at wide receiver. So far through OTA’s, that somebody has been Justyn Ross. The rookie had the catch of the day at training camp, and quarterback Patrick Mahomes was impressed by the rookie’s raw talent.

Speaking to reporters, Mahomes said that “[y]ou still see the talent, that’s the first thing. I mean you saw the catch on Twitter, but the way he catches the football out of the air, he snatches it. There are no drops or anything like that.”

Of course, success in OTA’s does not always transfer to the NFL field. Plenty of training camp darlings have turned into nothing more than NFL role players, but there is reason to believe that this hype is justified.

Early in his college career, Ross looked like one of the best young prospects in football. During his age-19 season, the Clemson product recorded 46 receptions on 76 targets for 1,000 yards and nine touchdowns. He followed this up by recording 66 receptions for 865 yards and eight touchdowns one year later. His film was just as impressive as his raw numbers, and at the time, most believed he was on pace to be a first- or second-round pick. 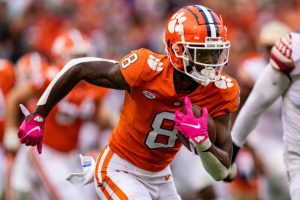 What Stands In His Way

The biggest hurdle for Justyn Ross is staying healthy. Ross missed the entire 2020 season after undergoing surgery for a neck and spine injury. While he did play in 2021, the fallout of said injury was so severe that every single team decided that his neck issues were too worrisome to justify a draft selection.

The NFL is a vicious game, and the physical nature of the sport means that every single player could suffer an injury at any given moment. That being said, it is clear that every team in the NFL believes that Ross carries significant risk and is one bad hit away from never being able to suit up again.

Even looking past the health issues, Ross still needs to learn Kansas City’s playbook and develop trust with Mahomes. Every rookie must undergo a similar journey, and Mahomes understands that struggle. Speaking to reporters, the quarterback said that learning the playbook is difficult for “every rookie when they come in. You don’t see that top talent that they can be until they learn and can just play fast. I think you’ve seen the splashes of how talented he can be and then you see times where he’s just barely off of what we wanted. And he learns from that and he doesn’t make that same mistake.”

Ultimately, Justyn Ross is no guarantee to even make the roster, much less turn into a significant contributor. However, that being said, the rookie has made a positive impression in OTA’s and, if he can stay healthy, could turn into a valuable asset on the most dangerous passing attack in football.