The Toronto Maple Leafs made quite a few depth moves this past deadline. They acquired players like Riley Nash, Nick Foligno, and David Rittich in the days leading up. One of the most peculiar additions to me was the addition of Ben Hutton. This is a low-risk addition that I love, but what role does he play? The Leafs of years past definitely would have needed the help on the blue line. But this season, the defence is more of a strength than ever for the Leafs. Let’s look at Ben Hutton’s role moving forward with the Toronto Maple Leafs.

How Ben Hutton Fits into the Toronto Maple Leafs Lineup

The acquisition of Hutton is a bit curious. You could almost say it’s… The Curious Case of Benjamin Hutton!

Anyways, I liked the trade for the Leafs, but was initially confused by it. I’ve written a lot about the Toronto Maple Leafs defencemen this year, like how good the Jake Muzzin trade has been, Justin Holl‘s emergence, or T.J. Brodie‘s stellar defensive performances. Then I saw this tweet.

If  Jake Muzzin goes down in the playoffs again, or even Justin Holl, the Leafs will have not only lost one of their key defensemen, but also a key penalty killer. And that’s where Ben Hutton shines.

More Than a Depth Acquisition

While I doubt anyone expects Hutton to be the player he was in 2019-20 with the LA Kings, he has been consistently great at 4v5, despite any struggles at even strength. 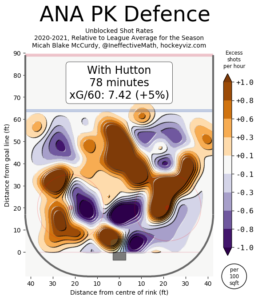 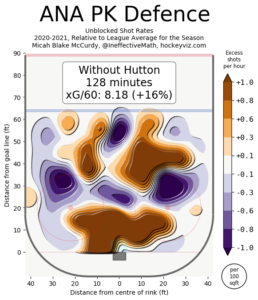 Ben Hutton severely improved the Anaheim Ducks penalty kill while he was there. Taking it from a terrible PK to a respectable one when he’s off the ice vs when he’s on (as seen above).

While he is almost certainly coming in and playing as the 7th defenceman, Hutton has a very clear player archetype to fill. If a defenceman like Morgan Rielly or Travis Dermott were to go down, I’d expect Rasmus Sandin to come in to fill that role (assuming he is healthy). Should a player like Jake Muzzin or Justin Holl get injured (Toronto’s two best penalty-killing defencemen), I’d expect Hutton to come in and help maintain Toronto’s incredible penalty kill.

What Hutton Can’t Do for the Leafs

I wouldn’t trust Hutton in major minutes at 5v5, even though I believe his on-ice offence has severely underperformed his expected. He fits in solidly at a bottom pair 5v5 role in sheltered minutes. The Leafs can rearrange the defence pairs as needed based on the injury to slot Hutton in there, but to put him in higher would be foolish at this point.

If he can prove that he is more like the version of himself we saw on the LA Kings rather than this year on the Ducks and in years past on the Canucks, he could earn more important 5v5 minutes. As it stands, however, I don’t see that happening. Ben Hutton is very good for what he is. And he is a penalty kill specialist with slightly below average numbers at 5v5.

The Leafs addressed a lot of depth this off-season. Rarely do playoff runs go as intended without any injuries. And it seems like Kyle Dubas learned that after losing Muzzin last off-season. While the Leafs defence is likely the best I’ve ever seen from this team, if there are just a couple of injuries to a few key players, it can go downhill quickly. While the loss will still be felt, going out and getting depth players that can address certain aspects of key injuries is incredibly thoughtful and takes some foresight.

It’s not just going out and getting depth defencemen, but rather identifying what types of depth defencemen they already have and the ones they need. As previously mentioned, Ben Hutton won’t be stepping in if Rielly goes down, as the Leafs already had Sandin. But if Muzzin goes down again, then they would be left with a Martin Marincin calibre player.

Leafs fans should be excited about this playoffs. Not only is this an incredible roster, but they now have the depth to deal with injuries this year.