Mike Babcock’s biggest failure as the Leafs head coach is perhaps scratching Justin Holl for 71 games during the 2018-19 season. The Leafs’ defence was not good. The Leafs had a player who had seen success at the AHL level and had been developed through the organization. Why not take more of a chance on Justin Holl? Yet, he sat in the press box for 71 out of 82 games that season.

Justin Holl and his Growing Role With the Toronto Maple Leafs

Under Sheldon Keefe, Holl has seen tremendous success. He has been put in a position to succeed, stapled next to Jake Muzzin on the second pair, and it has paid off. Holl has been the best penalty killer among Leafs defencemen this season and ranks 32nd in the NHL among defensemen in xGA/60 at short-handed. His skills also come through at 5v5. 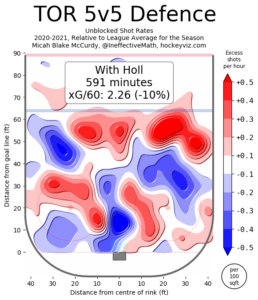 While not exceptional by any means, he has definitely solidified himself as a top 4 defenceman on the Leafs. He has been a part of this team’s major defence reform. The team, and its fanbase, has been looking for a “steady, calm, strong defensive” type defenceman ever since 2016-17. While they’ve added players like Jake Muzzin and T.J. Brodie, it turns out they’ve also had one developing right in their own system as well.

Justin Holl does a lot of things well. While he’s never going to make an excellent offensive play, or maybe won’t defend 2-on-1’s quite as well as Brodie does, he is a solid defenceman that oftentimes will make the correct play and will help your team on the ice.

After playing quite some time under Sheldon Keefe in the AHL with the Toronto Marlies, he knew what potential Holl had. Keeping him stapled next to Muzzin was a good plan. While the top pair has seen Rielly playing with Cody Ceci, Tyson Barrie, and now T.J. Brodie, and the bottom pair constantly rotating, the one pair Keefe has kept together is Holl and Muzzin.

Because of their extensive time together, Holl and Muzzin have been one of the team’s best defensive combos since Keefe took over. While in 2019-20, it seemed that Muzzin was carrying Holl, it was the opposite at the start of the 2020-21 season.

Holl has also been excellent in terms of shot assists, zone exits, and zone entries. This is something Muzzin is also incredible at. While his ability to defend against zone entries leaves something to be desired, this is an area that Muzzin can cover in. It’s this combination, how they are both excel at so many things while also covering for the other’s few weaknesses, that makes them such a great pair.

I’ve outlined how I think the Leafs should protect Holl in the expansion draft. If this does happen, a Muzzin-Holl pairing could be a Maple Leafs staple for a long time. Muzzin has another three years after this one, and Holl has another two. With the future of Morgan Rielly still up in the air, this could even be the Leafs’ top pairing moving forward.

Holl has had a tough path to the NHL. Crawling through the system, developing his skills to exactly what the team wants. Making his way through a coach that didn’t see anything in him. Now, he’s a top-four defenceman on the top team in the North Division.