TJ Brodie signed with the Toronto Maple Leafs prior to the 2020-21 season. This comes after the Leafs attempted to trade for him in the summer of 2019 for Nazem Kadri. TJ Brodie has been in the Leafs sights for quite some time. With the Toronto Maple Leafs 19 games into their season (approximately a third of the way through the season), it seems like the perfect time for a “way too early evaluation of TJ Brodie”. 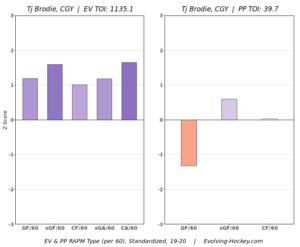 Data and visuals from evolving-hockey.com

As we can see, Brodie had strong results in Calgary last year. His defensive capabilities were strong. He would finally provide a competent defence partner for Morgan Rielly. The thought process was that his offence wouldn’t differ too much either, as Rielly could provide similar offensive support as Giordano did.

We aren’t just going to talk about what Brodie did well last season. This season, Brodie has done what has been expected of him. He has been on the ice to defend leads, compensate for Rielly’s defensive blunders (there’s been a lot), and even seen some time on the second powerplay unit.

In this section, I will be contrasting Brodie with Tyson Barrie a lot. They will be, whether fairly or unfairly, forever linked in my mind. When the Leafs couldn’t get Brodie, they got Barrie. The day Barrie walks, the Leafs replace his spot with Brodie.

Brodie on the power play is an interesting choice, but I think it’s a fantastic one. I wrote last year that one of the ways to fix the Leafs’ power-play was to stop taking point shots. Barrie was very guilty of this. On the power-play, the team should be getting the puck in close to dangerous areas and be taking high percentage shots. Shooting from the point on the power-play seems to just waste chances with low percentage shots. The point should be used as a passing outlet rather than as another shooter. Barrie would often shoot in these situations.

Brodie, on the other hand, is the complete opposite. 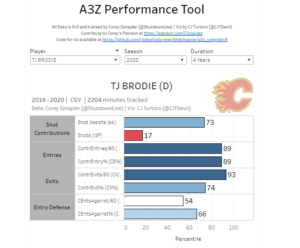 While the data shown above is at 5v5, I believe it can speak to the type of player TJ Brodie is. He is a pass-first, rarely shoot defenceman. So far this season, Brodie is tied (with Joe Thornton) for the least iCF at just two shot attempts (minimum 10 minutes played).

This is the most desirable quality I have for a defenceman after watching last season. He acts as a perfect fit on the second unit and could step into the first unit if need be.

This is the thing I have seen stick out the most about Brodie. He’s seen a lot of odd-man rush chances against. When in the position Brodie tends to go down a lot to block the passing lane.

This was quite the defensive play from TJ Brodie last night. #LeafsForever pic.twitter.com/kPFvViMHeR

Brodie might be the best odd-man rush defender of all time pic.twitter.com/ObXbsoe8Aa

They have all gone well thus far (he seems quite good at it), and the logic makes sense behind it. Take away the passing lane so the goalie can focus on the shooter. Taking away the royal road passes is key to keeping pucks out of the net in these situations. This is the ideal theory a defenceman should be looking at when defending these rushes.

My only concern is, in practice, if teams begin to pick up on these habits of Brodie (say, in a seven-game series when there’s more emphasis on reviewing tape of your opponents). I worry that players will begin to hold onto the puck, show a little patience, and wait Brodie out. This is a small concern, yet a concern nonetheless.

Overall, Brodie has been what the Leafs wanted defensively and a good fit on the second power-play unit. At 5v5 Brodie has a 54.16 xGF%. He has been good at denying zone entries:

Brodie shuts down McDavid and Rielly exits the zone pic.twitter.com/9prkWUTEuB

These zone entry denials have led to an excellent defensive impact at 5v5. 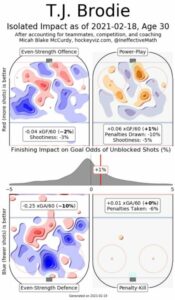 Data and visuals from hockeyviz.com

What Brodie has lacked this season is some sort of offensive presence at 5v5. While he could be relying on Morgan Rielly to generate the offence for him while he tends to defensive matters, or if he is still finding his groove, it hasn’t been where it was last season.

TJ Brodie has been an excellent addition to the Leafs, however, he still has room to improve. He has to compensate for the defensive inefficiencies of Rielly and has less than stellar impact offensively at 5v5. With time, I believe Brodie will continue to excel with the Leafs.