The 2018 NHL Entry Draft is almost upon us. The Philadelphia Flyers have many options at their disposal with two picks in the top 20 (14 & 19). Jonatan Berggren is a Swedish right winger who can definitely be categorized as speedy. Moreover, his game fits the modern NHL. Speed and creativity unleashed at the drop of a hat are right in his wheelhouse. Berggren is a great choice for the 19th overall pick. 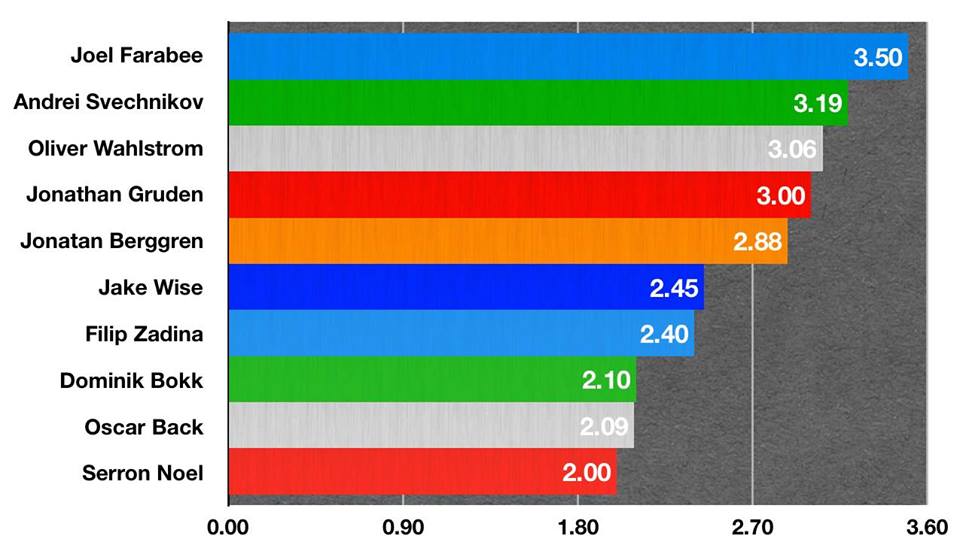 Jeremy Davis of CanucksArmy has presented his findings for 2018 NHL Draft prospects.   Berggren features quite heavily near the top of the leaderboard in most of Jeremy’s metrics. Estimated Primary Points Per 60 is no exception. Berggren’s ability to be a catalyst for his team’s offence is on full display here. The attacking nature of his play in the offensive zone lends itself to a high rate of offensive production at 5v5. There is a sense when watching him that with every possession, he is looking for any and every possible way to put the puck in the back of the net. 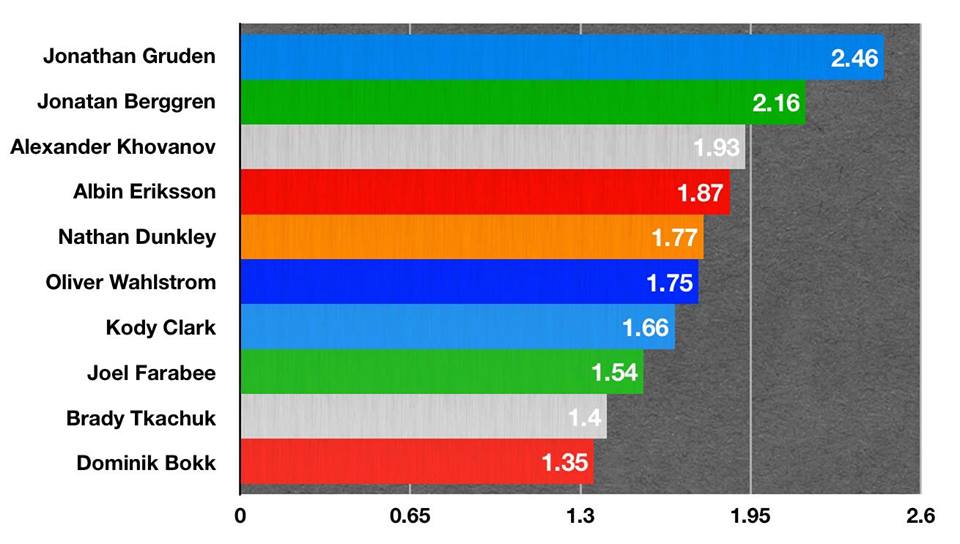 Berggren’s performance in this statistic highlights his play away from the puck. When his team unwittingly loses possession of the puck, he is one of the first players on the backcheck. Berggren will attack the puck carrier if he is in the vicinity during a change of possession. However, there are times when he can get lost puck watching in the defensive zone. This, in turn, allows his check to find the soft ice for some high-quality scoring chances. The aforementioned flaws in his defensive game were more pronounced during his stint in the SHL this season. Berggren certainly has room to grow defensively. His defensive deficiencies are most certainly fixable through coaching and more attention to detail. 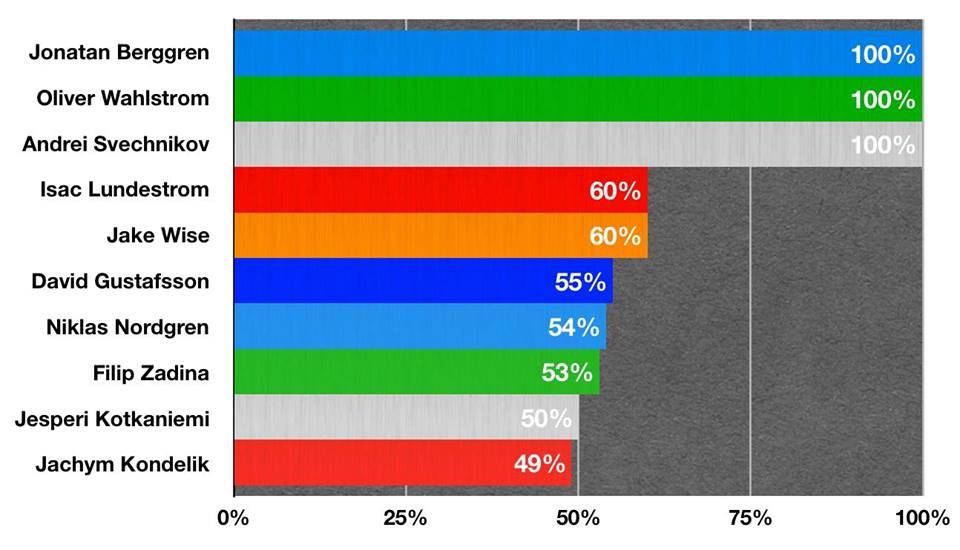 Jeremy Davis’ work describes XLS% as the likelihood that said players have to play 100 or more NHL games while under team control. Berggren’s likelihood to play at least 100 NHL games when measured against similar players in their draft year is astoundingly high. Furthermore, it would come as a bit of a shock if Berggren flamed out at the NHL level when taking this metric into perspective. 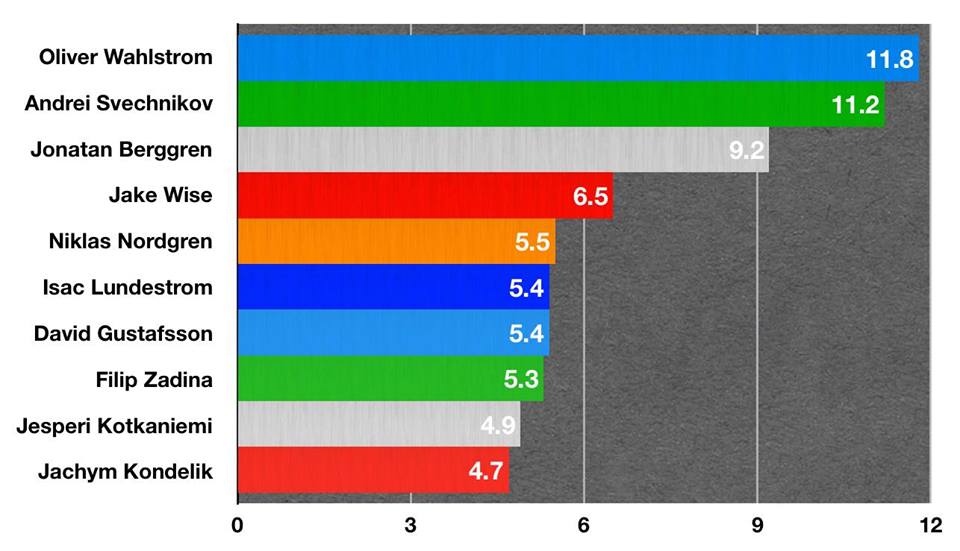 This statistic is an approximation of point shares per 82 games based on the prospect’s draft year production. Out of all the first year eligible forwards (as ranked by CanucksArmy), only Oliver Wahlstrom and Andrei Svechnikov grade out higher by approximate wins created. The value that Jonatan Berggren brings to his team, especially at the SuperElit level, was immense. In the future, as his game matures he will contribute more wins for his team in the SHL.

Berggren’s skating ability is top notch. There is little wasted movement in his stride that could possibly hinder his mechanics. Additionally, a lot of power is generated from his stride which allows him to get to full speed quickly. In like manner, Berggren’s vision is one of the best in this entire draft class. This skill helps him find openings in defensive coverage to exploit. Berggren’s high-level vision assists him when seeking open teammates. His first-rate passing prowess is also up there with the best among the top 2018 right winger prospects. The speedy winger’s passes tend to be on the tape and catch his teammates in stride. Comparatively, he can stickhandle in a phone booth. Berggren’s slick stickhandling can get him out of a jam and into a potential scoring opportunity quickly.

Furthermore, while his shot currently lacks power and velocity, it’s placement tends to be right on the mark. That’s an excellent starting point. Hockey sense is another skill that Berggren possesses in abundance. He has shown that he can anticipate play in order to know where to be on the ice at any given time. Consequently, Berggren has an innate understanding of when to speed up the game and when to slow it down.

Trying to do too much

Presently, Berggren can fall victim to trying to make something big happen out of every possession. Instead of just taking what is there (i.e. the simple play). It’s ideal to have a player who is constantly looking to create. Nonetheless, a less is more approach from time to time would do him a world of good. An example of this is when the speedy winger attempts to go through multiple defenders even though a teammate is nearby (& open). Fortunately, Berggren doesn’t do this very often.

Berggren clocks in at 5-foot-10 and 185 pounds according to EliteProspects. Currently, it can be a bit too easy to knock him off the puck in open ice or during board battles. Moving forward, it would behoove him to put on about 5 or 10lbs of muscle to supplement his frame for the professional ranks. The added mass would do him wonders in the corners, along the boards, and in open ice. Luckily for him, he doesn’t have to put on too much weight before he’s ready for the big leagues.

Jonatan Berggren has all of the makings of a top line winger in the NHL if his development goes smoothly. Adding weight, continued attention to detail away from the puck, and taking some more calculated risks with the puck should be key areas of focus for him. There is little doubt that the speedy Berggren could be an impact NHLer in the next 2-to-3 years.

Derek Neumeier of @DefendingBigD, @RecrutesHockey, and @FCHockey did some research on Berggren’s production and compared it to some current NHLers when they played in the SuperElit at 17 years old. Berggren had a better points-per-game rate in that league than: Nicklas Backstrom, William Karlsson, Viktor Arvidsson, Mika Zibanejad, Jakob Silfverberg, Gustav Nyquist, Elias Lindholm, Alexander Wennberg, Kevin Fiala, and Andre Burakovsky.