England sit atop Group B with four points heading into their final group-stage match. Next up, they face Wales, who are in a must-win situation following their 2-0 loss to Iran. Last Word on Sports predicts England’s lineup and looks at their recent form heading into this fixture.

How England Have Lined-Up Recently

Gareth Southgate has employed a 4-2-3-1 formation for the first two matches in the group stage. However, he is expected to go back to his favoured back-three system for the match against Wales. Southgate is a manager who does not like to tinker with his squad mid-tournament, but with certain injury boosts, he might look to give some of his key players a run, ahead of the knockouts.

Kyle Walker comes back into the starting lineup, which could see Kieran Trippier occupy the right wing-back spot. Elsewhere in midfield, Liverpool skipper Jordan Henderson replaces Mason Mount, who has not had the best of starts to the tournament. Teenager Jude Bellingham misses out due to the extra defender in the 3-4-3 formation. 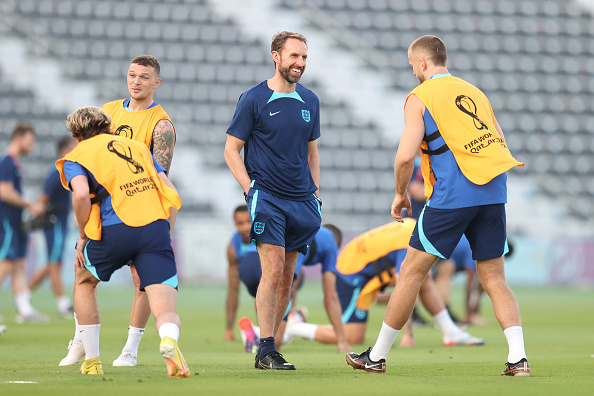 Harry Kane’s fitness remains a concern for Southgate. The Three Lions’ captain was not at his usual best and struggled to keep up with the pace of the game against the Americans. However, England received a major injury boost in the form of Leicester City’s James Maddison, who trained with the team earlier this week.

Gunners defender Ben White missed the training sessions on account of an illness. Despite this, Southgate has adequate cover in the defensive areas thanks to the returning Walker and Henderson. Former Leeds United man Kalvin Phillips is also available for selection and could get a few minutes on the pitch against the Welshmen.

England produced a lackluster performance against the USMNT which saw them concede more shots than they took. As is the case with any two countries that border each other, there is competitive rivalry when they come up against Gareth Bale’s Wales. “We know they have additional motivation to play against us, from what they are saying, so we have got to be prepared”, Southgate added ahead of the matchup.

The Three Lions would undoubtedly look to their wing-backs for creativity against the Welshmen. Trippier’s set-piece threat makes him England’s key man as was the case in the previous World Cup. England fans would also love to see Trent Alexander-Arnold get some minutes in that position. Henderson’s experience and leadership would come in handy as they aim to win the midfield battle over the likes of Aaron Ramsey and Harry Wilson.

Read More: Who are the favourites for the World Cup?

Kane is also known to drop deep and play a false-nine role which allows the wide players to cut inside the 18-yard box and have a shot on goal. When out of possession, England play a 5-4-1 system which aims to mitigate the threat of Wales’ wingbacks. Lastly, England are also equipped to deal with aerial threats, thanks to Harry Maguire and John Stones.

The predicted lineup in a 3-4-3 formation is as follows: