The 2021 Arizona Diamondbacks find themselves in a top-heavy division. Most pundits and fans alike feel that the NL West is a two-horse race between the Los Angeles Dodgers and San Diego Padres. It’s not hard to see why given how talent-heavy those rosters are. This means, however, that the Diamondbacks are getting overlooked, which recent history has shown to be in their favor.

A Contrast in Two Seasons

In 2019, the Arizona Diamondbacks turned some heads with an 85-77 record. This came after trading franchise icon Paul Goldschmidt to the St. Louis Cardinals in the off-season. Furthermore, they traded ace Zack Greinke to the Houston Astros at the trade deadline and played better. They were a few late-inning meltdowns from making the Wild Card game.

In the off-season, after some aging veterans left, the Diamondbacks made a few free agent signings to fill in some holes. One biggie came when they signed left-handed pitcher and 2014 World Series MVP Madison Bumgarner to an affordable multi-year deal. Another was right fielder Kole Calhoun, a local product whom they signed to a two-year deal. The final piece seemed to fall in place when they traded for All-Star center fielder Starling Marte. Expectations were high, and although they weren’t expected to win the division, they were certainly in discussions for a Wild Card berth.

Then March happened. After the long shutdown, the team returned, but their rhythm was severely disrupted. The season was one giant session of frustration. Nothing seemed to go right. They finished in last place but seemed to be in almost every single game. Players who had produced at a high rate in 2019 struggled in 2020. At the deadline, they unloaded Starling Marte, Robbie Ray, Archie Bradley, and the embattled Andrew Chafin.

In the 2020-21 offseason, the team mainly stood pat. Financial concerns kept them from spending much money, largely because there wasn’t much to spend. However, manager Torey Lovullo adamantly states that “this is a good baseball team.” They just didn’t have much go their way in 2020. So how 2021 goes depends on one question — which version of these players is the “real one” — 2019 or 2020?

This is especially true with the position players. Most of the veterans had their worst offensive season in years — or, in some cases, in their careers — in 2020. Some might say that 2019 was an outlier. However, 2020 was the goofiest year in the lives of almost everyone on this planet. While true that every player in the league had to deal with this, everyone has dealt with this disruption to their lives differently. In a sport so heavily based on mental focus, a major upheaval in routine can submarine a season in a hurry. Not only that, but the players heard over and over, “This is a sprint, not a marathon!” When things didn’t go well early on, they pressed, and it became a vicious cycle. Consequently, 2020 very easily could have been the outlier.

This is a position that is a prime example. Both Kelly and Vogt dropped significantly in production between 2019 and 2020. Kelly’s weighted on-base average (wOBA) fell 60 points, while Vogt’s plummeted by 96. In weighted runs above average (wRAA), Kelly went from 6.1 in 2019 to -4.4. Vogt dropped from 2.8 to -5.8. Defensively, when looking at Rtot (Total Zone Runs Above Average; in essence, how many runs a player saved versus the average player in the league at that position) Kelly went from 3 to -1.

This position will likely be a platoon, at least to begin the season. One member is veteran Asdrubal Cabrera — a World Series champion in 2019. The other is third-year utility man Josh Rojas, whose spring production has been so high that stories on him are almost overdone. Cabrera’s offensive reduction saw a .331 wOBA and 5.1 wRAA in 2019. In 2020, he slid to a .319 wOBA and -0.2 wRAA. Defensively, he had a Rtot of -1 runs saved in 2019, but that was spread over three positions. When looking solely at second base, he was +2. Cabrera did not play second base at all in 2020.

Rojas made his major league debut in 2019 after the Diamondbacks received him as part of the haul for Zack Greinke. His 2019 wOBA was .279, which translated to a -5.6 wRAA. He struggled in 2020, batting .180 with a .209 wOBA. That was good for -6.6 wRAA. However, due to his willingness to accept coaching and work on his swing, he has had a tremendous spring. If he can maintain that momentum, he could be one of the league’s biggest surprises in 2021.

UPDATE: Lovullo said Tuesday that when Cabrera and Eduardo Escobar are both in the lineup, Escobar will play second and Cabrera will play third. The coaching staff feels that the infield defense is stronger when they are playing those respective positions.

UPDATE: As mentioned above, when Asdrubal Cabrera is in the lineup, Escobar will play second and Cabrera will play third.

Defensively, Peralta put up great numbers in both seasons. In his 2019 Gold Glove campaign, his Rtot was 11 runs saved. This translated to 16 runs saved per 1,800 innings. In 2020, he saved 17 runs per 1,800 innings. Both the Diamondbacks and their fans have little to worry about in 2021 from the Freight Train.

Here is the biggest question mark as to which season was the outlier. Marte was off the charts in 2019, missing the batting title by one hit in the closest batting race in decades. He slashed .329/.389/.592 with 36 doubles, nine triples, 32 dingers, 92 RBI, and a .405 wOBA. That was good enough for a mind-boggling 46.0 wRAA. He did this while playing two positions well: he started the year at second base, where he had a Rtot per 1,800 of nine runs saved. His production earned him enough fan votes to start the All-Star Game for the National League. Due to teammate injuries, he ended the year in center field, where he had a Rtot per 1,800 of three runs saved. While the defensive numbers weren’t at an elite level, they were still quite good.

My, how the tables turned in 2020. His wOBA dropped like an anvil to .316. This translated to a wRAA value of (gulp) -0.7. The key for Marte, obviously, is to keep playing strong defense while bringing back his 2019 offense. Otherwise, his 2019 campaign could go down as one of the biggest flashes in the pan in recent memory.

Something strange about Calhoun is the disparity between his batting average and his on-base percentage. In 2019, he had a .232 average and .325 OBP; in 2020, it was .226 and .338. He is a player who walks a lot and strikes out a lot. When he does put the ball in play, he hits it hard but often suffers from Atom Ball Syndrome. Some of this is bad luck, but some of it also is getting game-planned by over shifts.

Regardless of the reasons, Calhoun is someone whose production the team will count heavily on if they are to have any success in 2021. 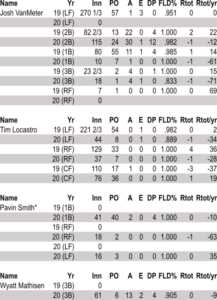 Josh VanMeter, Tim Locastro, Pavin Smith, and Wyatt Mathisen begin the year as reserves. VanMeter is a utility man who can play corner outfield or any infield position other than shortstop. Locastro, an outfielder, brings speed and a certain “peskiness” to the lineup. Smith can play any outfield position as well as first base. Mathisen is listed as an infielder but has only played third base in a regular-season game. Offensively, all of these players had a negative wRAA output in 2019; in 2020, only Locastro and Mathisen had a positive value.

Zac Gallen is the ace, but he will miss a few weeks due to a freak forearm injury. In his absence, the rotation is Madison Bumgarner (L), Merrill Kelly, Caleb Smith (L), Taylor Widener, and Luke Weaver. Some feel that when Gallen returns, Widener will leave the rotation. However, he has pitched better than Weaver recently. Unless Weaver stops hanging his breaking balls, he could easily be the pitcher who loses his spot when Gallen returns.

Widener has not had a major league start yet. The two remaining members of the rotation — well, two until Gallen returns — had a 2020 campaign that they would like to forget. Weaver hung too many breaking balls. As a result, his hits per nine climbed from 7.69 in 2019 to 10.9 in 2020. Home runs per nine more than doubled — 0.84 to 1.73. He also struggled with control, with his walks per nine going from 1.96 to 3.12. This all combined to send his WHIP from 1.073 to 1.558. His ERA-minus also jumped from 66 to 145. After a promising start to the 2019 season had been cut short by an injury, these struggles were both surprising and disappointing.

Bumgarner, in an even bigger surprise, had a back injury that plagued him before he even felt that something was wrong. Even the respectable numbers he posted after recovering were not enough to salvage a disastrous season. His hits per nine climbed from an already concerning 8.28 in 2019 to 10.15 in 2020. Home runs per nine more than doubled, going from 1.30 to 2.81. His WHIP shot up from 1.127 to 1.440, while his ERA-minus went from 92 to 143.

It goes without saying that the Diamondbacks need Weaver to return to his form from 2019. They also need their big-money free agent from two offseasons ago to pitch the way he did before he signed in Arizona.

This is the biggest area of concern on the entire squad. The only left-hander is Alex Young. Of the others, the only pitchers with more than three years of experience are Chris Devenski, Tyler Clippard, and Joakim Soria. Clippard went on the 60-day Injured List Monday, so he cannot pitch until Memorial Day at the earliest.

Inexperience is not the only area of concern. A bigger one looms — the lack of a ninth-inning shutdown guy, also known as a true closer. The three pitchers with the most experience are all either seventh- or eighth-inning setup men. Stefan Crichton was the closest thing the team had to a closer after the Bradley trade in 2020, but he is not ready to have the job full-time yet.

Taylor Clarke can be a long reliever who also spot-starts. Yoan Lopez, Riley Smith, and Kevin Ginkel are the middle relief options. Lopez and Ginkel had flashes of brilliance in 2019 but struggled mightily in 2020. Smith has pitched in a grand total of six major league games. Two of them were middle-leverage situations, and the remaining four were low-leverage. In other words, his appearances have come when the outcome of the game was not in question.