MINNEAPOLIS– The NCAA Tournament has provided the amphitheater for unlikely heroes to emerge. Players that did not capture the national attention before, would instantly become entrenched into March Madness lore. Lorenzo Charles of N.C. State, Keith Smart of Indiana, Luke Hancock of Louisville, or Grayson Allen of Duke, fit the mold of players who would become legends in the Final Four. It’s time to add Texas Tech’s Matt Mooney to that list.

In the National Semifinals against Michigan State, Texas Tech found their unlikely hero in Mooney. The two-time transfer would become unstoppable from beyond the arc, generating 22 points, 12 of which were from three. The adverse journey Mooney has been on will be worth it if he can follow up Saturday’s performance with a legendary one Monday night in the National Championship.

“I’m living the dream right now,” says Mooney. “We just want to be aggressive and have fun out there.”

The Journey to Texas Tech Was Long & Arduous for Matt Mooney

Matt Mooney never thought he’d be in the position he is now; playing for a National Championship. Much like his passionate, candid coach Chris Beard, Mooney had to undergo a journey with multiple obstacles, with no guarantees of basketball success.

Matt Mooney would grow up just outside of Chicago, in the small town of Wauconda. With a population of a little over 13,000 people, it’s the place where the dreams of success and prosperity are often overridden by crippling realities. In order for Mooney to play basketball just like his brother Joe, he had to make a sacrifice. To commute two hours a day to attend Notre Dame College Prep to learn the game from long-time NBA player Jim Les.

For the young guard, he thought attending a basketball prep school would give him the gateway ticket to playing the game in college. But few coaches paid attention to him. They labeled him as “tall and too skinny.” While the rest of the country was focused with five-star recruits like Jabari Parker, Air Force took a chance on Mooney. As a freshman, he struggled, only averaging 6.9 points per game. Along with the rigid culture, it prompted young Mooney to transfer to South Dakota, where he could play in a more competitive league than at Air Force.

After sitting out a season, Mooney showed signs of playing solid basketball. Averaging 18.7 points, 4.1 rebounds and 3.1 assists as a junior, the guard would be named to the First-Team Summit League for the second year in a row. But South Dakota failed to make the March Madness, despite Mooney’s 30 point performance in the Summit League Championship game.

It left Mooney at another critical juncture. Stay at South Dakota where he was thriving, or go to a school with a chance to compete in the NCAA Tournament. Enter Texas Tech, a school that ironically under Coach Beard promotes the structure and defense that made Mooney want to leave Air Force.

But the red shirt senior guard knew this opportunity could not be passed up. A year ago, Texas Tech lost in the Elite Eight. A program that was on the rise, led by star guard Jarrett Culver. And a coach in Chris Beard that stresses the importance of playing tough, physical defense and gelling players together.

“Coach Beard is really good at getting one-year guys and new guys gelling with
the guys from the previous year,” stated Mooney. “He did it at little rock and I’m sure he did it at other times in his career, and we are doing it again this year.”

Under Beard, Mooney not only became a prolific shooter, but he could also defend with ferocity. Averaging 11.2 points, 3.2 rebounds and 3.2 assists this season, Mooney shot an impressive 38.8 percent from beyond the arc. In Texas Tech’s losses this year, they shot 33 percent or less from beyond the arc. This is why the Red Raiders needed Mooney to step up in the Final Four National Semifinal.

Against Michigan State, Texas Tech would be playing one of the top defensive teams in the nation. The Red Raiders were well aware that Jarrett Culver would be taken out of the game, evidenced by his measly 3 of 12 from the field.

But in the second half, Mooney stepped up. He hit one three after another. Nothing the Spartans could do could stop Mooney from converting buckets from beyond the arc.

Mooney a Critical X-Factor Against Virginia in National Championship

“When he gets in that zone, it’s hard to stop him,” Jarrett Culver affirmed after Saturday’s win.

Texas Tech will face their toughest test yet in the Virginia Cavaliers, as they attempt to win their first National Championship in school history. In the past 16 games, Virginia’s offensive efficiency is over 120. And their defense, ranked fourth in the nation against defending the three (28.7 percent), allows only 88.8 points per 100 possessions. It will be critical for Texas Tech to maintain its defensive pressure, while moving the ball efficiently on offense.

But with the game on the line, it is safe to say that Texas Tech will rely on their experienced senior guard to make a big play. Mooney has answered the call throughout his career; when everyone doubted him, he stepped up and beat the odds with his performance on the court. Now, he has a chance on Monday night to solidify himself into Texas Tech basketball history with a performance for the ages.

‘Chase your dreams. Pursue your dreams,” says Mooney. “I never thought I’d be in this situation. I’ve had so many people along the way who have helped me out.” 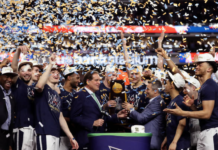 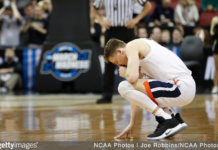 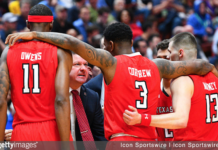