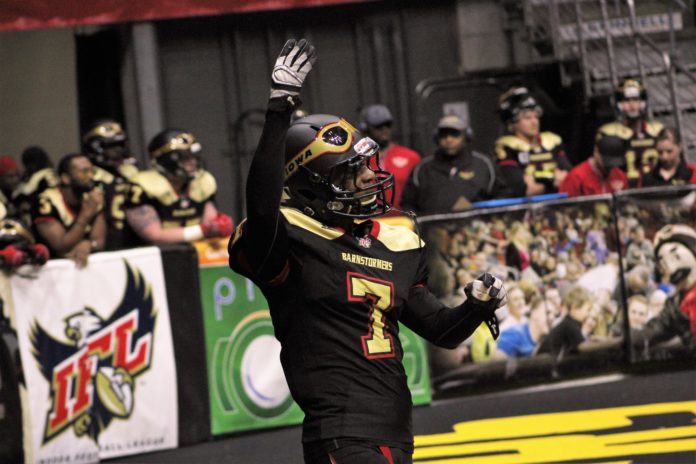 In an unexpectedly chippy game, the Iowa Barnstormers overcame a slow start to overtake the Cedar Rapids Titans 48-21 on Friday night at Wells Fargo Arena.

The Barnstormers improved to 7-2 on the season and earned their fourth straight win as they head into the home stretch of the season.

“Cedar Rapids is a good ball club,” coach Dixie Wooten said. “They came to play, we just had to make adjustments. [The slow start doesn’t alarm me]. We have cedar rapids out of the way, now we can focus on Arizona.”

On the first drive of the game, Iowa quarterback Drew Powell had a bad read and threw a pick six, which gave the Titans a 7-0 lead right off the bat.

On the ensuing possession, the Barnstormers drove down the field and eventually saw wide receiver Skyler Scott, who was making his debut, find the end zone.

“He’s big time,” coach Dixie Wooten said. “He only practiced one day, so he’s going to come in and play some good ball for us.”

Scott was called into Iowa to fill the empty roster spot left by Sheldon Augustine, who attended a Canadian Football League (CFL) tryout during Friday’s game.

With fellow receiver Johnny Duarte injured, Wooten’s hand was forced in bringing in a third player to accompany Brady Roland and Ryan Balentine.

Iowa would try to keep the momentum going on the next offensive drive, and ended up seeing running back Donavan Williams score his first touchdown of the night to help the team to a 14-7 lead.

“He made a few mistakes and got benched, but he came back and got his chance again and came in and played his butt off. I’m proud of him and can’t wait to see him next week.”

Iowa limped into the half with a slim 28-21 lead, but thanks to the help of the defense, the Barnstormers wouldn’t surrender any more points for the rest of the night.

However, the Barnstormers had to survive a scare early on in the fourth quarter.

While neither team put any points on the board in the final 9:41, Iowa saw its best defensive player in Bryce Enyard go down with an injury.

Although, it was clear Enyard’s injury wasn’t as serious as it could have been.

“I wanted to go back in,” Enyard said.

Enyard finished the game with one interception, bringing his total for the year to eight. He is four interceptions away from tying the IFL season record.

Iowa’s next game will come against first place Arizona, and it could very well determine where this year’s United Bowl championship game is held.

“I’m confident [we can win],” linebacker Zach Allen said. “We’ve been on the road the last couple games and we’ve been shutting out the opposing teams. I’m definitely confident.”

Indoor Football League Standings
As of May 11, 2018