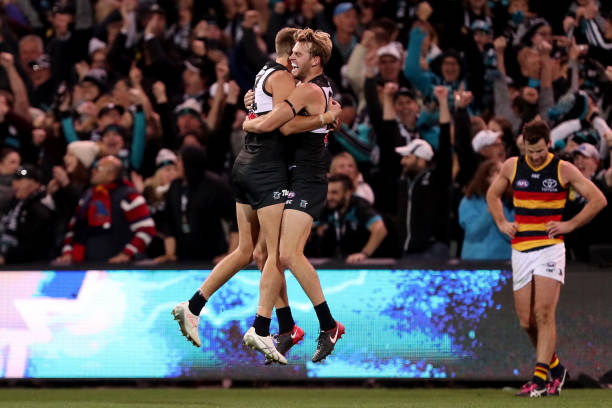 AFL Round 8 is in the books, and most of the games were tight contests decided in the final term. At this stage in the season, the top 8 tends to stay the same, so if you’re side is in, you should be pleased.

The game of the round saw Port Adelaide make a second half comeback to nip their rivals Adelaide by just 5 points, 95-90. The Power saw more of the footy and played a physical style that bothered Adelaide. Steven Motlop was the hero on the day, as he scored with just 21 seconds left to turn a one point defeat into a five point victory that returns Port Adelaide to the top 8. The Crows went up, slipped behind, then almost crawled back, and despite the pain of defeat, they can’t be that angry with their performance and their 5-3 record on the year.

The Difference maker for Port was Tom Rockliff, who returned with a bang, posting 31 disposals and 9 tackles. Robbie Gray kicked six goals, Paddy Ryder and Chad Wingard adding 4 more, while Justin Westhoff and Ollie Wines were both over 25 disposals.

Best on ground for the Crows were Rory Atkins and Rory Laird, Matt Crouch, and Eddie Betts, who kicked 3 goals, however they were lacking in the midfield engine room on the day.

The ladder leading Richmond Tigers were tested by a spirited North Melbourne side, but in the end they prevailed 82-72 despite trailing midway in the final term. North had their chances, but Richmond was generally on the front foot in the contest as Trent Cotchin, Bachar Houli, and Nick Vlastuin were among their disposal leaders. Josh Caddy kicked 4 goals, and Kane Lambert added 3 more, while Dustin Martin was tagged out of relevance by North standout Ben Jacobs.

The West Coast Eagles pulled away late to remain #2 on the ladder and sending a struggling GWS side tumbling further down the ladder after a crushing home loss. The Eagle, winners by a score of 86-61, were simply better in what was a relatively even contest at times. Jack Darling and Jake Waterman combined for seven goals, while Andrew Gaff, Elliot Yeo, and Jack Redden were again superior in the midfield.

Sydney earned a big win 79-71 at the MCG as they controlled the midfield and took a late lead, despite a significant disadvantage in inside 50 opportunities. Rising star Ben Ronke kicked 7 goals for Sydney, channeling his best Buddy Franklin impression, while Will Hayward added 3 more. Jake Lloyd, Luke Parker, and Isaac Heeney led the disposal count, while star Hawk Tom Mitchell was tagged effectively.

Without Mitchell firing, James Sicily and Shaun Burgoyne led the Hawthorn disposal count, while Jack Gunston and Luke Breust combined for 8 goals in a valiant effort. Neither side looked poor and it was a solid game, but Sydney will get confidence from the win.

Geelong led the entire contest against Collingwood, prevailing 66-45 after the Pies were a woeful 5.15 in front of the goal sticks. The contest was close otherwise but the Pies wasted their chances despite 30+ disposals for Steele Sidebottom, Jeremy Howe, Jack Crisp, and Adam Treloar, 40+ hitouts for Brodie Grundy, and a pair of goals from Tom Phillips. Gary Ablett and Patrick Dangerfield paired up well to led Geelong, while Sam Menegola kicked three pivotal goals for the Cats who sit top 4 in the ladder.

Melbourne Into the Top 8 With Gold Coast Win

Melbourne avoided blowing their opportunity against the Gold Coast Suns, breaking down the Gold Coast backline to win 146-77 on a 21.20 scoring effort. The Demons matched an inside 50 record as James Harmes and Clayton Oliver led disposals, and Tom McDonald, Jesse Hogan, and Mitch Hannan combined for 11 goals.

The struggling Suns were led by Jack Martin (4 goals), and Touk Miller (28 disposals) but they looked tired and lost against the Dees.

Carlton Gets First Win of the Season

The Essendon Bombers look finished as finals threat after losing to previously winless Carlton 91-78 on the weekend. The Bombers pitifully surrendered in the final term as Dale Thomas, Kade Simpson, Patrick Cripps, and Ed Curnow led a gritty Blues effort. Charlie Curnow kicking three goals. Dyson Heppell, Shaun McKernan, and Orazio Fantasia were among best on ground for Essendon, but the likes of Brendon Goddard and Zach Merrett were again a massive disappointment. Bombers fans will be looking for answers after a poor eight rounds of footy.

They weren’t facing a world beating side, but the Western Bulldogs got the job done to extend their winning streak 107-93 against Brisbane. The Lions kept the margin close despite being dominated on the stats sheet. The Dogs got 47 disposals from Jack Macrae, who has been special in recent weeks, Lachie Hunter added 33 more, while Marcus Bontempelli kicked 4 goals. With their leaders firing, the Dogs have a genuine chance to be a finals factor this season.

Dayne Zorko (24 disposals, 4 goals), and Charlie Cameron (3 goals) were standouts for the Lions, but they remain the only winless side in the AFL and are now alone at the bottom of the ladder.

Dockers Stand up At Home

Fremantle defended Optus Stadium with an 89-59 win against St. Kilda. The loss is the same old story for Saints fans,  as their woeful attack produced only one multi-goal scorer (Jade Gresham) and a whole lot of disappointing performances despite decent games from Jimmy Webster, Luke Dunstan, and debutante Ed Phillips.