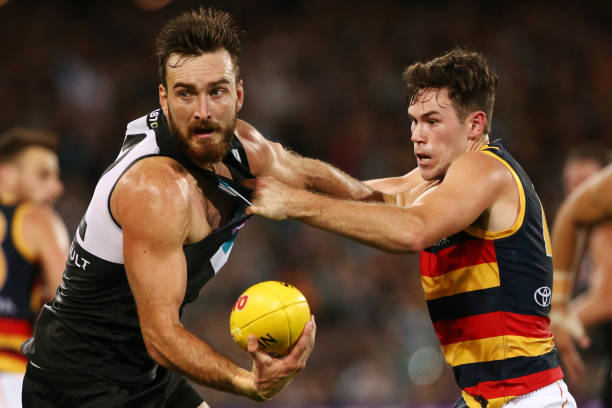 AFL Round 8 is upon us, it’s time to review each matchup and tip the winning side.

Hawthorn vs. Sydney (Friday at the MCG)

Hawthorn has won their last two, while Sydney has lost two of their last three and is playing away from home. The Hawks will have confidence with a three game winning streak against the Swans. Ricky Henderson and Will Langford slot in this week, while the Swans swap Dan Robinson and Tom McCartin for Robbie Fox and Harry Marsh. Sydney will need to find scoring after they were tagged and dogged by North last week, while Hawthorn will look to get Tom Mitchell and Jaeger O’Meara loose in the middle of the ground. This contest looks close, but I’ll tip Hawthorn at the MCG, with their James Sicily led backline making the difference. Hawthorn by 17

GWS is at home, and favored, but the Eagles are on fire at 6-1 and I expect them to get their revenge from last year where they suffered a double defeat. Luke Shuey and Nic Naitanui are major outs without a doubt, but GWS is not strong in the ruck, and they still have a hefty injury list of their own, even with key forward Jeremy Cameron returning, along with Rory Lobb (struggling Jon Patton gets axed). The Eagles have a winning formula right now, and I’d expect Shannon Hurn in the back, and Josh Kennedy up front to have big games and lead them to a win. West Coast by 24

Carlton vs. Essendon (Saturday at the MCG)

In 14 games these sides have won just two games between them (both by Essendon). Last year the h2h was split, but all the pressure is on the Bombers this time out, as a loss here would further ruin their confidence about making finals. Carlton is fully in rebuild mode and should be able to play a bit looser as Charlie Curnow returns (Levi Casboult is a key out). The Bombers lose struggling forward Joe Daniher and backman Andrew McGrath, while Orazio Fantasia returns. Carlton will hang close in this one, largely thanks to Patrick Cripps, but Essendon should have too much firepower to lose this one. Look for Cale Hooker to have a good game starting as a forward. Essendon by 17

Gold Coast Suns vs. Melbourne (Saturday at the Gabba)

The Suns are playing a home game in Brisbane against a Melbourne side that just got above .500 and wants to stay there the rest of the season. Gold Coast has won just 1 of their last 5 and they’ve struggled against the Dees in recent years. Steven May and Aaron Hall are major ins, while the Dees swap Christian Salem in for Jayden Hunt. Jesse Hogan and Clayton Oliver stand alone as best on ground in this one and I don’t see the Suns keeping up with Melbourne in this one. Melbourne by 38

Both teams are finals contenders through seven rounds, as they now face a Showdown test. The Crows have dominated Port as of late, and they are favorites to continue their winning ways. The Power do get some major reinforcements this week, with Chad Wingard, Tom Rockliff, Sam Powell-Pepper, and Tom Clurey slotting into their side for the likes of Dom Barry and Jasper Pittard. The Crows return Tex Walker but lose Darcy Fogarty and Wayne Milera. The Adelaide backline have been fantastic for the Crows this year with Paul Seedsman, Tom Doedee, and Rory Laird forming an effective trio. Port needs Steven Motlop, the Gray’s, Paddy Ryder, and especially Tom Rockliff to stand up and put in their best game of the season this week to win. That could happen, but the Crows seem more organized right now. Adelaide by 31

The Brisbane Lions will trot back out on the field hoping for their first win of the season after another close but no cigar outcome in a previous round. The Dogs have won three straight against the Lions, and their last two games this season. This is a pivotal game for the Dogs as they can return to .500 with a win. Marcus Bontempelli and Lukas Webb slot in for Lin Jong and Tim English. The Lions make just one change, Nick Robertson for Jacob Allison. The two M&M’s, Jack Macrae and Toby McLean have led the Dogs resurgence in recent games, the Bont and Lachie Hunter have helped as well. Brisbane has some talented players, but unless Dayne Zorko and Dayne Beams fire, it will be another loss for the Lions. Western Bulldogs by 38

With the pressure swirling around Fremantle coach Ross Lyon due to off-field issues, I’ll tip an upset in this one. The 1-6 Saints badly need a win, and at 3-4 Fremantle are hardly unbeatable, despite their strength at Optus. The Saints have dominated Freo in recent years as well and I have a feeling their ins Blake Acres and Ed Phillips will help with the woeful goal kicking this season (Paddy McCartin and Ben Long are out). The Dockers are also missing a key backline cog with Nathan Wilson out. Nat Fyfe will likely add to his Brownlow votes, but the Saints pull an upset. St. Kilda by 10

North fans are already thrilled, but a win over Richmond would make them euphoric. The Tigers lead the ladder at 6-1 and get Trent Cotchin back, while losing Dion Prestia this week. The Roos swap Ed Vickers-Willis out, with Jarrad Waite returning. This North side has great chemistry and plays true to their brand, but Richmond has been crushing sides this year and they play with the best chemistry in the competition. The Tigers deserve to be picked until they show signs of distress. Richmond by 33

Collingwood vs. Geelong Cats (Sunday at the MCG)

Both sides are 4-3 and this is a crucial game at the MCG. The Pies are in good form and play well against Geelong, the returns of Daniel Wells and Josh Daicos, and Alex Fasolo strengthen their side, while the Cats return the little master Gary Ablett, and a host of others including Harry Taylor and George Horlin-Smith. Tom Hawkins is out with a suspension. The Pies are exceeding expectations but Geelong has a higher ceiling. Ablett will make a big return at the MCG where he plays his best. Geelong by 14