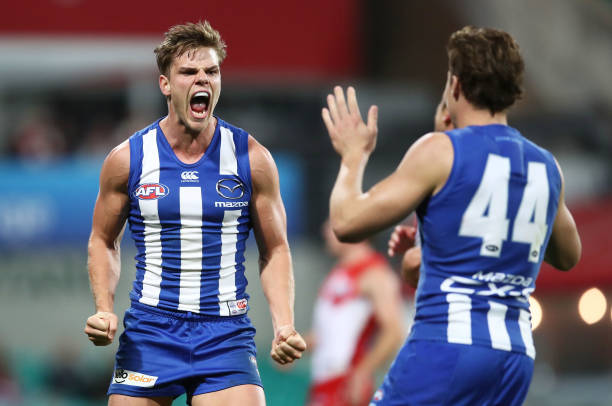 The Geelong Cats thumped the GWS Giants on Friday Night Footy 93-32. While the Giants were decimated by injuries, the sheer dominance of Geelong was a surprise, as the Cats won in every category and put in a stand up performance against a GWS side that now looks a bit shaky. The Cats leaders were Mitch Duncan, Joel Selwood, Tim Kelly, and Patrick Dangerfield, as the Cats midfield dominated. Tom Hawkins piled on 4 goals, with Stewart Crameri, Dangerfield, and young gun Esava Ratugolea adding 6 more combined.

It was one of GWS’s worst performances in a long time, but Dylan Shiel and Stephen Coniglio were still solid in the midfield, the problem is the Giants had nothing but failure in the forward line, only Jeremy Finlayson had a multi-goal game.

North Melbourne is starting to believe after another upset win. The Roos kicked 9.14 to edge Sydney 68-66, the Swans losing by just a pair of behinds despite the edge in inside 50. North’s control of contested possession giving them the slightest of edges as Sydney had two late chances to seize the victory. North’s stars were Mason Wood (4 goals), tagger Ben Jacobs, who shut down Luke Parker and posted 29 disposals and 9 tackles, and Shaun Higgins, who led with 31 disposals. Both Higgins and Wood were key ins this week for the Roos, woh have put together a cohesive side that plays to their brand of footy through 7 rounds.

Sydney was led by Josh P. Kennedy and Will Hayward, but they were clearly missing Buddy Franklin, as 66 points isn’t normally enough to win an AFL contest.

Ladder leading Richmond and second place West Coast didn’t slip up this week. The Tigers kicked 15.20 in a 110-33 win against Fremantle at home, their dominant final term creating a lopsided result as Freo was stifled by Alex Rance and co. when they tried going forward. Dustin Martin, Kane Lambert, Jack Graham, and Bachar Houli led the Tigers, while Jack Riewoldt kicked 3 goals. Lachie Neale and Nat Fyfe were solid for Freo but it wasn’t enough as they suffered in Michael Walters notable absence.

West Coast led throughout and was able to build up a solid lead to prevail 102-60 against Port Adelaide. The Eagles won contested ball and positioned themselves the best on the ground as Jack Redden, Andrew Gaff, and Mark Hutchings led with disposals and Josh Kennedy and Jack Darling combined for 7 goals. Port got another good game from Robbie Gray, Travis Boak was competitive, and Sam Gray kicked a pair of goals but the Power were listless on the day as a group.

Despite low expectations going in, the Queensland sides held up well under pressure on the weekend, but they still ended the round in defeat. The Western Bulldogs won 81-72 over Gold Coast in a game that the Dogs needed badly. Gold Coast led in the final term but suffered a late letdown as Jack Macrae, Toby McLean, and Lachie Hunter were the Dogs standouts, while young Billy Gowers kicked a pair of goals. Jason Johannisen was also pivotal for the Dogs. Gold Coast was led by Touk Miller and Sam Day, but they also have to take from heart solid performances by youngsters Brayden Crossley and Charlie Ballard on debut.

Collingwood prevailed by a goal against winless Brisbane 121-114 thanks to a goal in the final 2 minutes after the Lions had tied things up. Pies captain Scott Pendlebury missed a good chunk of the contest with a sprained ankle, in his place usual suspects Steele Sidebottom and Adam Treloar stepped up, while Brodie Grundy (the leader in tackles) more than matched the Lions Stef Martin in the ruck. Jordan de Goey kicked 5 goals for the Pies, while Josh Thomas and Jaidyn Stephenson combined for 5 of their own.

The Lions stayed in the game thanks to the best performance of the season for Dayne Zorko, and a solid game from Dayne Beams, along with Martin, and Lewis Taylor (4 goals). Zorko had 34 disposals, 10 tackles, and 4 goals, responding in a big way after his awful start to the season.

Carlton, Essendon, and St. Kilda fans are hoping for the season to be over as their woes continued. Melbourne dominated the Saints 106-67 despite the Saints keeping it competitive in the stats column. Seb Ross and Jack Steven were standouts for the Saints, but the spotlight was stolen by Clayton Oliver, Angus Brayshaw, Michael Hibberd, and Jesse Hogan, those big 4 for the Dees leading most of the statistical categories and having the most influence on the ground.

Hawthorn dominated the second half after a neck and neck first half to defeat Essendon 90-67. The Bombers struggled to get forward as they didn’t have a multi-goal kicker (Joe Daniher again struggling), though Dyson Heppell was decent in the midfield. James Sicily, Tom Mitchell, and Jarryd Roughead led the Hawks as Hawthorn showed their class late in the game.

Adelaide took care of business against Carlton 125-70, and the Blues lost Levi Casboult for a while in the process. Matt Crouch and Rory Laird combined for 64 disposals, while Mitch McGovern and Josh Jenkins kicked 8 goals combined to lead the Crows. Ed Curnow, Harry McKay, Kade Simpson, and Patrick Cripps were bright spots for Carlton, but the Blues were again outgunned at every stage of the game by a better, more experienced opponent.