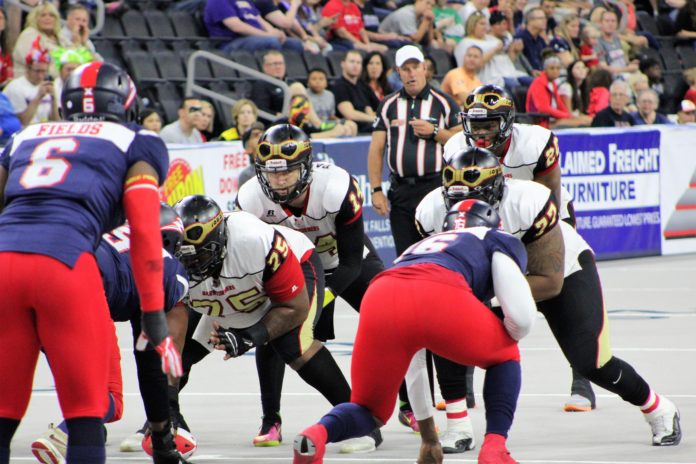 In 11 meetings all time against the Sioux Falls Storm, the Iowa Barnstormers only earned one win. It just happened to be last night.

Iowa defeated Sioux Falls 49-42 on the road at the Denny Sanford Premier Center on Saturday, making it the first time they’ve ever beaten Sioux Falls.

After returning from a Canadian Football League tryout in Saskatchewan, Drew Powell earned the start at quarterback taking over for Grant Rohach after he started the last two games.

The Barnstormers hopped out to a 21-point lead early in the second quarter thanks to two touchdown runs by Jamal Tyler and another by Powell.

Iowa’s defense held Sioux Falls to zero points in the first quarter, which largely contributed to the win.

Lorenzo Brown, a quarterback who has given Iowa fits in the past, scored the first touchdown for Sioux Falls with 10:04 to play in the second.

Before things started to go downhill, Powell tossed a 45-yard ball to Brady Roland for a touchdown to take a 27-7 lead. After the touchdown, Roland shushed the crowd, and the Storm took notice.

After Sioux Falls countered with a touchdown, they would sack Powell in the end zone to earn a safety.

The Storm would score once more in the half to trim the 20-point lead to four. At halftime the Barnstormers were ahead 27-23.

That wasn’t the case this night.

Powell broke free for a 27-yard touchdown run, and Ryan Balentine caught a 21-yarder as well.

Iowa held a 40-36 lead with 8:30 to play in the game. Sioux Falls had the ball and Brown’s pass was tipped into the hands of Iowa’s Jourdan Wickliffe and the Barnstormers took over.

The Barnstormers would score shortly after thanks to a catch from Sheldon Augustine to take a 10-point lead and eventually go on to get the win.

Iowa will return to the field this Friday when they face the Cedar Rapids Titans at Wells Fargo Arena. The game will kick off at 7:05 p.m.