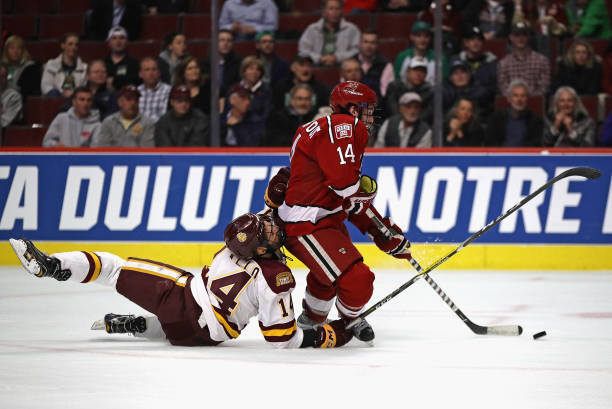 Alex Kerfoot chose to not sign his entry-level contract with the New Jersey Devils. Due to this decision his rights expired at 11:59 PM on August 15th, allowing him to become an NHL free agent.

Kerfoot has signed a two-year entry level contract with the Colorado Avalanche. Financial terms have not yet been released.

Alex Kerfoot has decided on Colorado.

Kerfoot, 23, has been playing in the NCAA with Harvard University for the last four years. During that time he has shown a good deal of progression. His point total has increased in every single season since arriving at Harvard.

In his freshman season Kerfoot played in 25 games for Harvard, scoring eight goals and adding six assists to his total. In just 27 games in his sophomore season he was able to more than double that tally, scoring eight goals once again and improving his assist total to 22.

While he didn’t double his point total in his junior season, he did make the jump to 34 points in 33 games. In that season he only had four goals, but improved his assist total to 30. And, once again, he improved his numbers in his final season with Harvard, posting 45 points in 36 matches in the form of 16 goals and 29 assists.

Kerfoot is also one of only 27 players in program history to make an All American Team. He was named to the All American Second Team in 2016-17.