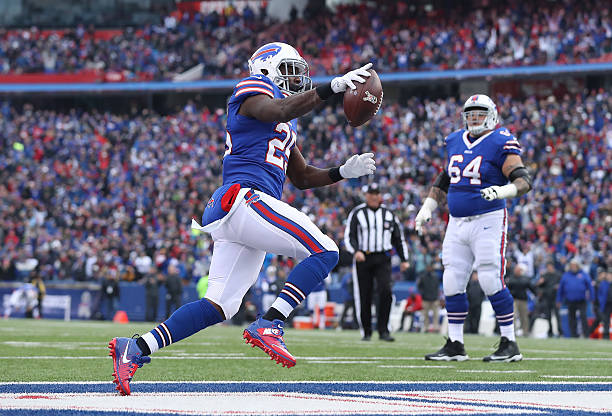 Don’t blame the Buffalo Bills rushing attack for the team’s continued inability to get over the postseason hump.

It’s a unit that comes into this season having led the league running the football two years straight. With Bills training camp in full swing, all signs are pointing to that trend remaining intact. Spearheaded by LeSean McCoy who heads into his third season with the team, and combined with a talented and motivated supporting cast, excitement abounds across the board.

McCoy bounced back last year after missing four games due to injury in 2015, his first in a Bills uniform. The 2013 rushing champ was one of seven NFL running backs to finish with 1,200+ rushing yards. Only LaGarrette Blount (18), David Johnson (16) and Ezekiel Elliott (15) managed more touchdowns on the ground than McCoy’s 13.

Heading into his ninth NFL season, an obvious concern for McCoy is mileage. All expectations are that he’ll eclipse 2,000 career rushing attempts in 2017 considering he’s just 102 short of that milestone. Right now, just four active running backs have more. And all of them, Frank Gore, Adrian Peterson, Matt Forte and Chris Johnson are, in the words of Aaron Rodgers, “on the back nine” of their respective careers.

But don’t tell that to McCoy. The 29-year-old speedster is making waves during the first week of training camp. His explosiveness and ability to cut side-to-side continues to be on full display during drills. And he has the utmost confidence that 2017 will be another dynamic season for the Bills run game with him as the feature back.

“I feel good, I feel the same (as in previous years),” McCoy told reporters at training camp. “I feel young, I feel about 25. (I’m) making the same runs, same cuts. I feel good (in terms of) being explosive.”

One of the things Buffalo’s new coaching staff under Sean McDermott wants to do is make the running backs more a part of the pass game. It’s part and parcel of offensive coordinator Rick Dennison‘s philosophy that emphasizes efficiency through the air via high percentage throws. Incorporating more screens and other routes out of the backfield will be a key element moving forward.

It’s not something that McCoy is wholly unfamiliar with. Even last year, he finished third on the team in receptions behind Charles Clay and Robert Woods. Twice with Philly, McCoy totaled over 500 yards receiving. And he has 2,930 career yards through the air in addition to 13 touchdown receptions and a catch rate just short of 78 percent.

That lesser known aspect of his skill set is something Dennison and company hope to leverage this coming season.

“He’s got great ball skills, he runs good routes (and) he knows where to be,” Dennison noted. “Every time we’ve taught him a route, he picks it up (and) does it fast. We’re trying to do whatever we need to do. (That’s what) LeSean told me: ‘Whatever you need to do to move the ball.'”

In today’s NFL, having capable players who can take the pressure off your bell cow back is immensely important. Mike Gillislee occupied that role over the past two seasons for the Bills. But he’s no longer part of the equation after signing a restricted free agent tender with the New England Patriots.

Enter Jonathan Williams. A fifth round pick in the 2016 NFL Draft, Williams saw limited action as a rookie. Though he played in 11 games and scored a rushing touchdown against the New England Patriots in week 8, he finished with just 94 yards rushing.

The Bills took a big risk in drafting him. Williams missed his entire senior year with Arkansas after a preseason foot injury. With his workload certainly set to increase, Williams is working hard in camp so that he’s ready to assume the number two role behind ‘Shady’ come week one.

“I don’t want it to be too much of a drop-off when ‘Shady’ comes out,” Williams told Bills radio personality John Murphy. “Whenever he needs a breather or, you know, anything can happen. Running back is a physical game, so I want them to have that confidence (in me) as a number two running back so that whenever they do put me in, there won’t be a drop-off.”

Running the football was critical to the Bills identity on offense underneath the previous coaching regime. That’s expected to continue with McDermott at the helm and Dennison in charge of the offense. Though McCoy’s a year older and Williams is unproven, the potential is there for the league’s best rushing attack over the past two years to remain so in 2017.